A tree limb removal in Canada almost ended in disaster when a contractor’s chainsaw got stuck, setting off a dangerous chain reaction that could’ve resulted in serious injuries.

A video captured the shocking incident when it occurred in what appears to be a backyard in Kitchener, Ontario, on July 5.

In the 17-second clip, a contractor can be seen hanging from the tree, with one foot on the top of a metal ladder, as he reaches down to take something from the outstretched arm of a woman who has climbed halfway up the ladder. A chainsaw is embedded in the tree limb to his left. 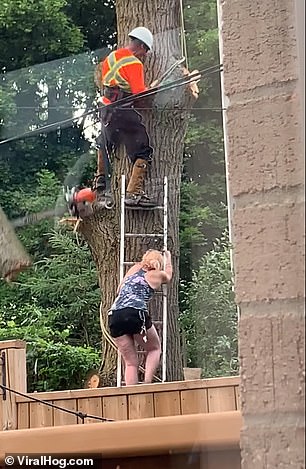 A second later, the huge branch breaks off the tree, sending it and the chainsaw — both secured by ropes — swinging through the air.

While the tree branch scythes through the air in a wide arc, the chainsaw succumbs to gravity more quickly and nearly hits the woman as she scrambles down and cowers on the ladder. Fortunately, it appear that the chainsaw was switched off when it fell.

Neither the woman nor the contractor are safe though, as the swinging tree branch heaves into view again from the right, knocking over a previously unseen tall metal ladder which strikes the contractor, flipping his helmet off his head.

The second ladder eventually strikes the woman, who is still trying to make her way down the original ladder, forcing her to lose her grip on the metal rung and she falls out of view. 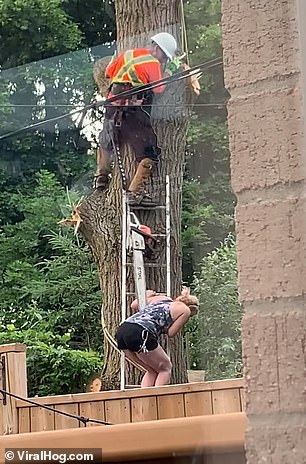 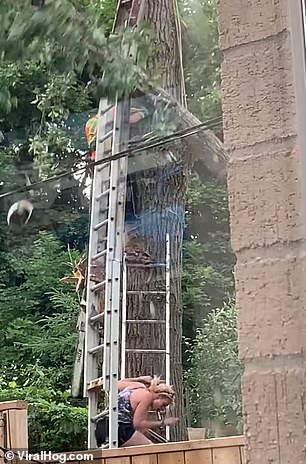 The chainsaw can be seen swinging through the air, narrowly missing the woman as she cowers on the ladder. The falling tree branch knocks over a second ladder, which hits the contractor, knocking his helmet off his head 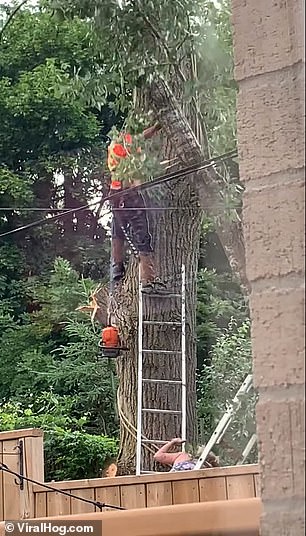 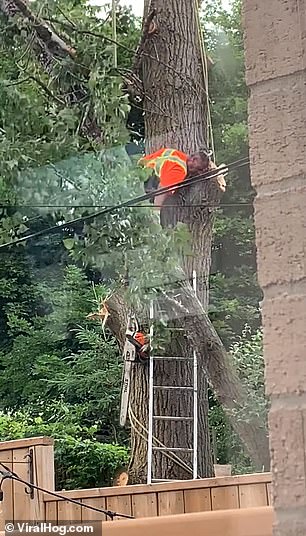 The ladder then falls on the woman, causing her to loose her grip on the metal rung, sending her plummeting about 10 feet down to the ground

‘There had already been a few near misses, so I didn’t have a lot of confidence that the contractor knew what he was doing,’ the person who shot the video told ViralHog, adding that ‘He looked like he was in over his head.’

The video-taker said that moments before the video started, the contractor had gotten his chainsaw stuck in the tree and had called out for the woman, his colleague, to help him.

‘The ensuing chaos of falling chainsaws and rickety ladders is right out of Final Destination,’ the person said, referring to the horror movie in which a series of bizarre incidents kills friends who previously escaped death on an airplane.

‘There’s almost too much mortal danger to catch it all,’ the person adds, noting that the falling branch narrowly missed hitting the overhead power lines as well and that the woman fell nearly 10 feet while she had some kind of tool clenched between her teeth.

‘Incredibly, there were no injuries,’ the person said.