Manchester City looked to be in control of their Champions League tie against Schalke thanks to a first half goal from Sergio Aguero, but Schalke got a goal back through a penalty kick.

However, it wasn’t without controversy, as the referee took a long amount of time to check VAR over the decision, in part thanks to the pitchside monitor not working.

Between the ball striking Nicolas Otamendi’s hand in the box and the penalty being scored, four minutes and 26 seconds elapsed.

The ball strikes Nicolas Otamendi’s hand in the box, but the penalty was not originally given 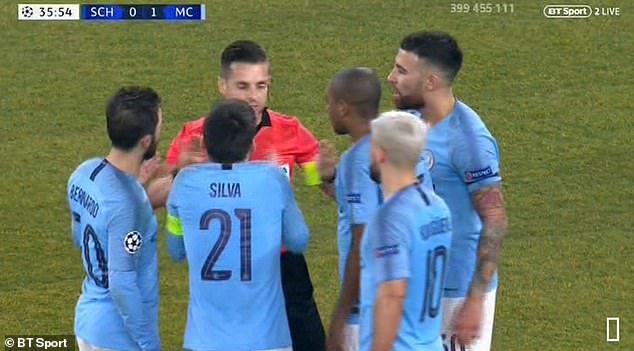 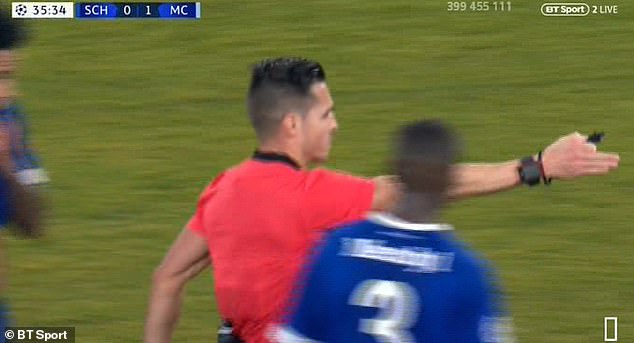 Eventually, over four minutes after the incident happened, Schalke scored the penalty kick

The decision itself took two minutes and 43 seconds to make, as the referee brought over both captains to try and stop both teams protesting to the officials.

In addition, it was revealed at half time that the referee wanted to use the pitchside monitor to check the decision, however it wasn’t working.

The drama continued as it was still over a minute until the goal was scored after the decision was given.

Nabil Bentaleb was the man to step up and put the pressure of the time delay behind him, and he managed to score, leveling the match at 1-1.

Otamendi was given a yellow card for the handball, setting up yet more protests. 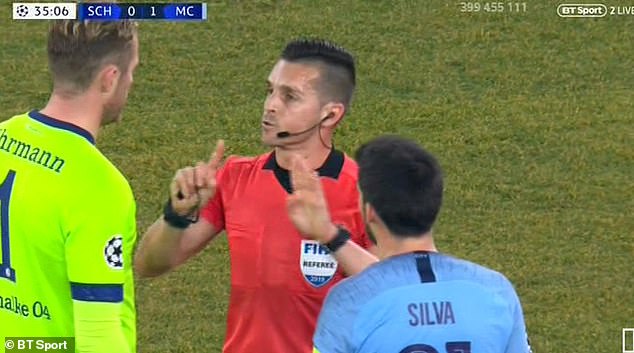 Misery kept piling up on top of Pep Guardiola and City, as they were behind just a few minutes later to yet another penalty kick, after Fernandinho committed a foul in the box.

Bentaleb slotted that one home too to give the hosts the lead.

And it got worse for the visitors as Nicolas Otamendi received a second yellow in the second half, putting City down to 10 men for the last 20 minutes.

Yet, it wasn’t to be for the German team, as two late goals from Leroy Sane and Raheem Sterling gave City a 3-2 win in the first leg.

The Champions League has only implemented the VAR system for the last 16 phase, so it’s still early days for the technology in the competition. 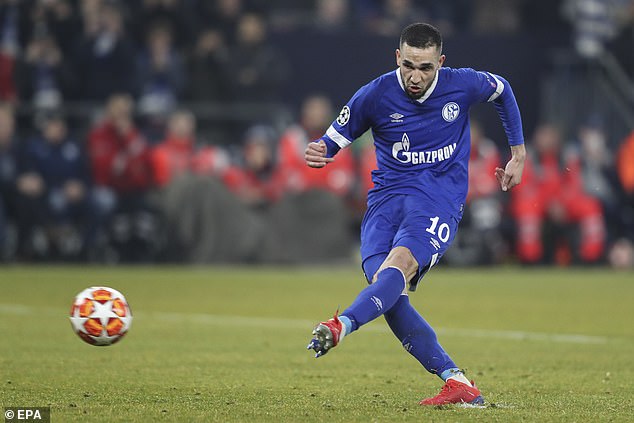 Even after the penalty was given, it was still over a minute until Nabil Bentaleb scored it

Rio Ferdinand spoke on BT Sport at half time about the decision, and doesn’t think it should’ve been a penalty.

‘He’s so close it’s difficult to get your arm completely out the way. His motion is going backwards away from the ball. I find it hard to give that penalty.’

Owen Hargreaves also didn’t think it was a penalty, saying: ‘What is it, 0.7 seconds? I think he does well to get his arm that far back.’

Meanwhile, in the other Champions League tie between Atletico Madrid and Juventus, VAR had a big impact as well.

Atletico Madrid had a first half penalty decision reversed as VAR deemed Diego Costa to be outside the box when the foul was committed on him.

Then, as Atletico fans were celebrating after thinking Alvaro Morata had scored, that decision was reversed too as VAR decided that he had fouled Chiellini in the build up.