Philip Hammond has told Tory leadership candidates including Boris Johnson and Dominic Raab any plans they may have for a no deal Brexit would be blocked by Parliament.

The Chancellor of the Exchequer, a strong opponent of a no deal exit, he told the BBC this morning that that No Deal would have ‘serious implication for our country’, adding: ‘Parliament has voted very clearly to oppose a no deal exit.

He also refused to rule out voting against the government in a confidence motion on the issue.

‘This is a Parliamentary democracy. A Prime Minister who ignores Parliament cannot expect to survive very long.’

It came as the the Tory leadership race intensified on only the second full day since the Prime Minister’s resignation, with Dominic Raab, Michael Gove, Jeremy Hunt, and Esther McVey setting out their stall in print and on television as a ‘Stop Boris’ operation seemed to gain momentum.

Both former Brexit Secretary Dominic Raab, and leadership front runner Boris Johnson, have said the UK will leave the EU on October 31 whether or not a deal can be reached.

Mr Hammond said: ‘Some people on the hardline Brexit wing of my party have consistently failed to understand how the EU have approached this problem’, adding that the EU had ‘never wavered’ from their plans on how to deal with the UK as a departing member.

He said: ‘I hear a lot of my colleagues talking about ‘wanting to do a deal’ with the EU, but actually very many of them only want to do a deal that is entirely on their terms.

‘The EU will not renegotiate the Withdrawal Agreement, I’m quite sure about that’, he said.

The Chancellor argued that Tories saying they would seek to renegotiate before leaving on no deal if necessary were offering the renegotiation as a ‘figleaf’ because EU internal politics, and timings of its sessions, would mean such a renegotiation was simply impossible before October.

Saying that No Deal would have ‘serious implication for our country’ the Chancellor warned: ‘Parliament has voted very clearly to oppose a no deal exit.’

Ignoring Mr Marr’s interjection that Parliament would not need to be consulted given existing legislation, he went on: ‘This is a Parliamentary democracy. A Prime Minister who ignores Parliament cannot expect to survive very long.’

Asked about plans outlined this morning by Dominic Raab to leave in October even if a deal is not done he said:  ‘Parliament will be vehemently opposed to that strategy.’

‘Going to Parliament with a hard line, absolutist view, and daring Parliament to accept it, is quite a dangerous strategy.’

He also warned he might even be prepared to take the drastic step of voting to bring down a future Conservative government in order to avoid no-deal.

Mr Hammond told BBC One’s The Andrew Marr Show: ‘I think it would be very difficult for a prime minister who adopted no deal as a policy – we are leaving with no deal as a matter of policy – to retain the confidence of the House of Commons.’

Asked if whether he would vote against the Government on a no-deal withdrawal if he was a backbencher in the autumn, the Chancellor said: ‘I would certainly not support a strategy to take us out with no deal.’ 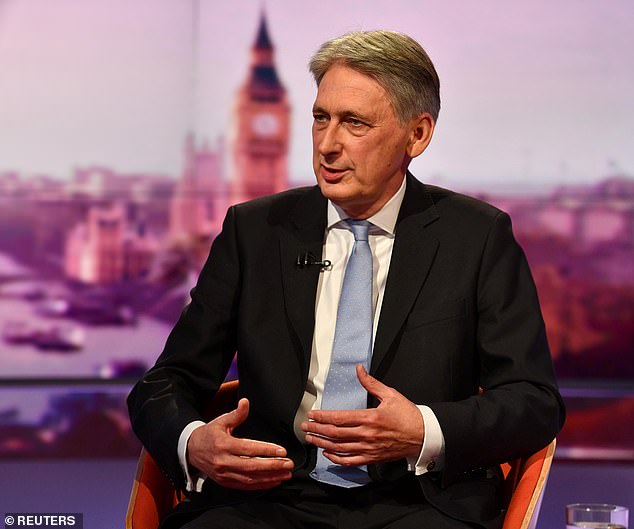 Asked again if he could vote against the Government on a confidence motion, the Chancellor said: ‘I’m saying this is a very difficult situation. It would challenge not just me, but many of our colleagues, and I hope we will never get to that position.’

‘What I would say is that in 22 years in Parliament, I have never voted against the Conservative whip, unlike many of my colleagues, and I don’t want to have to start now contemplating such a course of action.’

He added: ‘I would find it very difficult to vote for a no-deal Brexit, but I have never voted against my government, or my party, in the 22 years that I have been in Parliament.

‘And I don’t want to be put in that situation. So my focus will be trying to ensure that I don’t find myself facing that challenge.’

Asked again if he could vote against the Government on a confidence motion, the Chancellor said: ‘I’m saying this is a very difficult situation. It would challenge not just me, but many of our colleagues, and I hope we will never get to that position.’

Ruling himself out of the leadership race, but positioning himself as an elder statesman to be wooed by the contenders, Mr Hammond said he would be meeting with the candidates in a series of one-on-one meetings, insisting the race was about ‘policies, not personalities.’