The summer holiday plans of up to 250,000 Ryanair passengers were left in chaos today as the airline failed to block strike action by British pilots.

The airline lost a last-minute bid for an injunction in London, with the announcement made just seven hours before the strike starts in a dispute over pay and conditions.

Ryanair bosses today criticised their ‘highly paid UK pilots’ for ‘unreasonable’ pay demands that captains’ salaries be doubled from £170,000 to £375,700 per year.

However, it also insisted it ‘expects to operate its full schedule of flights to/from our UK airports’ over the next two days, although it still anticipates some ‘small’ delays.

Elsewhere, Ryanair successfully got an order in Dublin to prevent around 180 pilots based in Ireland from going on a separate 48-hour strike from midnight tonight.

Passengers wait to check in at Barcelona El Prat Airport in August 2018, as Ryanair pilots in  European countries staged a strike that prompted the airline carrier to cancel 400 flights

The proceedings in the two courts took place before planned action by UK pilot members of the British Airline Pilots Association (Balpa) from midnight tonight.

Experts believe the planned strikes could disrupt the holiday plans of up to 250,000 passengers booked on at least 1,714 Ryanair flights due to depart from UK airports.

Passengers told of their concern at the planned 48-hour strike tomorrow and Friday, with Kayla Flynn tweeting: ‘I’d be better off swimming to Lanzarote at this rate.’

Another, Steve Webster, said: ‘Can you tell me how you will not completely ruin two years of wedding planning for me, my wife and 75 guests with strike action?’ 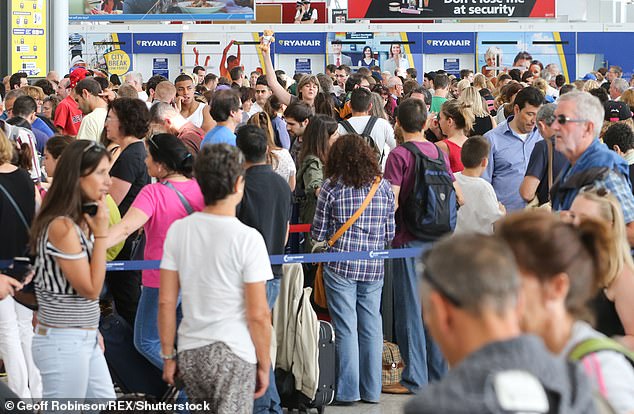 Foster child, 8, could miss out on his first ever flight

A family of three including an eight-year-old foster child who has never been on a plane before are facing a concerning wait to learn whether their Ryanair flight will go ahead.

The family, who cannot be identified for legal reasons, are booked to fly from a North of England airport tomorrow at 7am, destined for Faro in Portugal.

The father told MailOnline: ‘We are particularly upset because our eight-year-old is a foster child who was supposed to travel with us four weeks ago on a separate family holiday to Spain.

‘But due to an issue not related to Ryanair he wasn’t able to travel. This will be his first ever flight and he is beyond excited. We haven’t told him about the problems yet and just hope that when we get to the airport at 5am the issue will be resolved.

‘We currently have no back up plan and are very anxious because of the effect this will have on the child. He has been through a lot in his life and this will be devastating.’

He added that he was ‘very disappointed with Ryanair’ and that the family have ‘heard absolutely nothing’ from the airline so far.

The strike has been backed by around 350 of the airline’s 1,250 UK-based pilots. Another walkout is due to take place between September 2 and September 4.

In London today, lawyers representing the airline asked a judge to grant an injunction at a hearing.

Mrs Justice Lambert was told that members of the Balpa planned industrial action tomorrow and on Friday, and in early September.

Barrister Paul Gott QC, who was leading Ryanair’s legal team, told the judge, in a written case outline, that strike action could be ‘enormously disruptive’.

Mr Gott said Balpa had refused an invite to suspend strike action. He said Ryanair had no ‘realistic alternative’ but to ask for a ‘restraining’ order.

Barrister Andrew Burns QC, who is leading Balpa’s legal team, said, in a written case outline, that Ryanair’s application should be dismissed.

Mr Gott said Balpa had not conducted a ballot which complied with the requirements of labour relations legislation.

He said the union had not complied with requirements to: ‘accord a vote equally to all members’, specify when industrial action was expected to take place, explain how figures set out in a strike notice were arrived at. 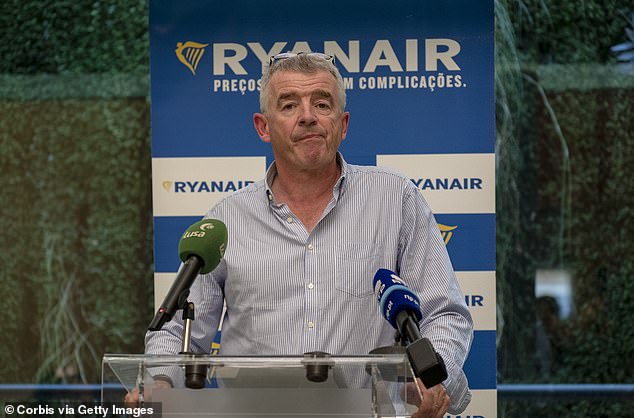 Ryanair boss Michael O’Leary is pictured in October last year. Ryanair said the union ‘should not be disrupting the return holiday flights of UK families later this week’

He said it was ‘readily apparent’ that Balpa had ‘substantially complied’ with legislative obligations.

Mother’s fears for son in Venice with limited epilepsy medication

A mother has been up all night worrying about her son who could be stranded in Venice without enough epilepsy medication due to the strikes.

Janis Boyes, 58, of Ashingdon, Essex, said her son Damon, 22, is supposed to return to London Southend Airport tomorrow after a five-day holiday in Italy with a friend from work.

But he has only got medication for his epilepsy that will last up to Saturday night, so she is extremely concerned he may be in danger if stranded.

Upon learning of the strikes, Ms Boyes told MailOnline: ‘I just panicked, I didn’t sleep at all. I don’t know whether to book another flight because there are other flights available. I did warn him about it last night and I’m waiting to hear from him this morning.’

She added: ‘The trouble with his medication is it’s not one that could be changed – he couldn’t just go to the pharmacy.’

Ms Boyes said she is now considering whether to book him another flight home on an alternative airline, with EasyJet now only having limited seats at £110 each on flights to Gatwick.

In Ireland, a trial, which began in Dublin on Monday, heard from senior counsel for the airline, and the union representing the pilots, Forsa, the parent union of the Irish Airline Pilots Association (Ialpa).

Justice McDonald said he would restrain Forsa ‘from directly or indirectly, organising, directing or endorsing their members to participate in a strike on August 22 and 23, 2019’.

The legal arguments surrounded whether an agreement signed in the summer of 2018 through mediation at the Workplace Relations Commission was an ‘over-arching agreement’ that covered pay conditions as well as seniority and annual leave.

Ryanair argued that the 2018 agreement covered issues surrounding salary, however Forsa and a number of named pilots say that the previous agreement only covered the issues that arose at that particular time.

Justice McDonald told Dublin High Court that he would ‘restrain the immediate industrial action’ of around 180 pilots in Ireland.

Martin Hayden SC, appearing for the airline, told the court in Dublin he found it ‘extraordinary’ that the union claimed the 2018 agreement signed by both parties does not cover pay, and the union had shown ‘complete indifference’ to resolving the dispute which will affect ‘hundreds of customers’.

Forsa told the court that Ryanair has been ‘curt and dismissive’ of a 30-page proposal it submitted to the company on pay and conditions, and at one point stated that the submission had ‘no basis in reality’.

Their affidavit stated that Ryanair has no basis to apply for an injunction to stop strike action, as the previous agreement signed by both parties in summer 2018 was ‘not a full collective agreement’.

A mother called Olive from Billericay called BBC Essex to explain how members of her family from Ireland could miss her daughter’s wedding.

She said: ‘I can’t really understand why it’s taken them so long. They’ve been in the High Court since Monday, and I don’t know why they’re leaving it until the last minute for all the people who have to fly.

‘I have some of my family coming over from Dublin and my best friend and her husband.

‘They only told me about two weeks ago – they’ve known for quite a while that Ryanair might strike but they didn’t want to tell me because they knew I’d be a bit upset.

‘So they’re on sort of tenterhooks because they don’t really know what to do and they sort of have to get a B plan.’

Balpa said earlier this week their chance to resolve the dispute involving pilots had been lost because Ryanair ‘has wasted time with unnecessary court action’.

It added: ‘Instead Ryanair is relying on legal technicalities to try to persuade the High Court to block the strike.

‘Ryanair is seeking a High Court injunction on Wednesday to stop strike action by UK Ryanair pilots, due to take place on Thursday and Friday this week, with a second round of dates in September.’

Balpa general secretary Brian Strutton said: ‘Ryanair pilots in the UK have a serious dispute with their company which will not be resolved by raising legal technicalities in the High Court.

‘Their attempt to block lawful strike action is just another demonstration of the bullying tactics the airline appears to favour.

‘It means all the time that could have been used to try to find a resolution will now be spent preparing for the court action.

‘It’s also worrying to see Ryanair continue to sell tickets for strike days – are they prepared to offer compensation to passengers if they are affected? I think they should tell passengers exactly where they stand.’

However, a senior Ryanair insider told the Daily Telegraph that the airline had contingency plans in place to most of its UK flights even if the legal action failed.

A Ryanair spokesman said: ‘Ryanair regrets the decision by less than 30 per cent of our highly paid UK pilots to vote for strikes on Thursday 22 and Friday 23 August, in support of unreasonable pay demands that captains pay be doubled from a current £170,000 per annum to over £375,700 per annum, just nine weeks before Brexit, which could severely damage Ryanair’s business and UK pilot jobs. 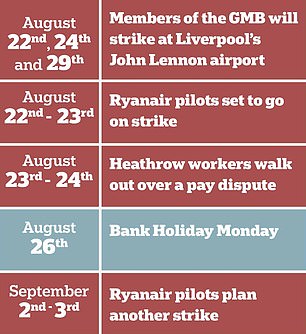 Disruption is set to continue for the rest of the summer holidays, with a series of strikes

‘Ryanair applied today to the London High Court for an injunction to prevent this unjustified strike by a small number of pilots going ahead during the last week of the UK school holidays.

‘However thanks to the great work and volunteerism of the vast majority of our UK based pilots, Ryanair now expects to operate its full schedule of flights to/from our UK airports on Thursday 22 and Friday 23.

‘We do not expect significant disruptions on Thursday or Friday, however we cannot rule out some small flight delays and/or flight changes.

‘We are working hard with our pilot teams to minimise any such delays for our customers and their families.

‘All passengers scheduled to travel on flights to/from UK airports on Thursday 22 and Friday 23 August should arrive at their departure airport as normal and they can expect their scheduled Ryanair flight to depart on time. 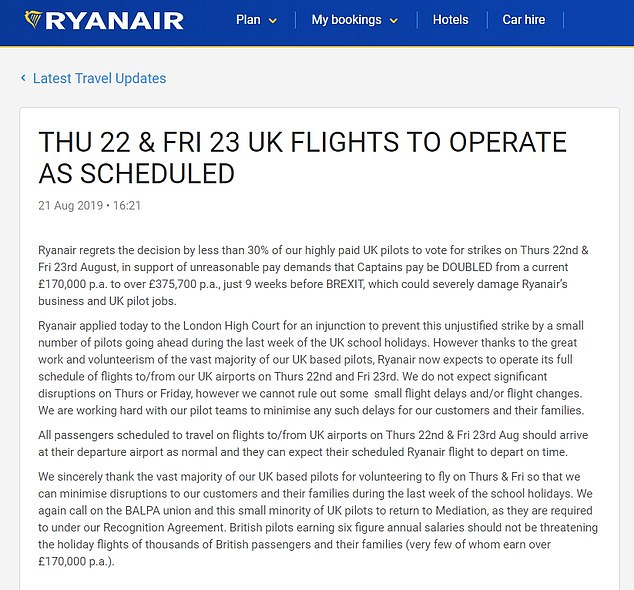 Ryanair bosses today criticised their ‘highly paid UK pilots’ for ‘unreasonable’ pay demands that captains’ salaries be doubled from £170,000 to £375,700 per year

‘We sincerely thank the vast majority of our UK based pilots for volunteering to fly on Thursday and Friday so that we can minimise disruptions to our customers and their families during the last week of the school holidays.

‘We again call on the Balpa union and this small minority of UK pilots to return to mediation, as they are required to under our recognition agreement.

‘British pilots earning six figure annual salaries should not be threatening the holiday flights of thousands of British passengers and their families – very few of whom earn over £170,000 per annum.’

Members of Balpa voted by four to one to back a campaign of action on a 72 per cent turnout.