The acrid smell of cannabis wafts across the green as a group of young teenagers brazenly pass around a joint.

This was the scene at 8pm on Thursday in a London park, and is similar to those being played out in open spaces across Britain this summer, three months after schools shut down, leaving hundreds of thousands of bored teenagers to run wild.

Last night, charities told The Mail on Sunday that thousands of out-of-school youngsters were in danger of becoming ‘easy prey’ for county lines drug gangs who are hunting for new recruits.

Party’s over: Police break up crowds of youths in Hove last week

The Children’s Society warned that middle-class children are particular targets, possibly because dealers think they are less likely to be stopped by police.

The warning came as frustrated residents in usually peaceful areas across the UK said they were at their ‘wits’ end’ after weeks of inebriated teenagers wreaking havoc in their neighbourhoods.

Two million children have done little or no schoolwork at home during lockdown, according to a recent report by University College London. Another recent study found that about four million pupils have not had regular contact with teachers and that up to six million children had not bothered to hand in their most recent homework assignment.

Little wonder that communities across the country complain that their green spaces have been turned into ‘unofficial Covid festivals’ of youngsters who leave areas strewn with rubbish and drug paraphernalia, including the increasingly common sight of nitrous oxide or ‘hippy crack’ gas canisters.

Ministers fear 700,000 children will be permanently harmed by missing school during lockdown, widening the gulf between the nation’s poorest pupils and those in private schools who have had access to a wealth of online learning tools and lesson plans during the pandemic.

The Mail on Sunday today reveals that school attendance will once again become compulsory for all from September. But Education Secretary Gavin Williamson is facing fierce opposition from militant Left-wing teaching unions who want classrooms to remain shut for safety reasons.

For hundreds of thousands of parents – concerned that their teenagers are losing their way – the return to school cannot come soon enough.

As temperatures soared last week, police were called to break up mass brawls between youths in Hove, Southsea, Ogmore-by-Sea in South Wales, and Tyneside. Dozens of youngsters were also involved in shocking violence against officers in South London.

Dean Edwards, 32, who witnessed the trouble flare in Hove, said: ‘A bunch of the kids were walking along singing “School’s Out For Summer”. They were clearly drunk.’

The teenagers left empty beer cans, vodka bottles, hastily stubbed cannabis joints and laughing gas canisters behind after the police moved in to disperse the crowd.

Deputy Chief Constable Jo Shiner criticised the ‘shocking’ scenes, adding: ‘I would urge young people to think about their behaviour. A criminal record will not help you get a job in the future.’

Rod Barrett, 72, a retired teacher who lives opposite the park, said: ‘I have a certain amount of sympathy with the teenagers because they have been left high and dry this summer, and hot weather combined with access to alcohol and drugs is always going to create a fervid atmosphere. The effect of children not being in school and having nothing to do will impact on communities like ours across Britain.’

Frustrations are clearly running high among police forces which are struggling to contain the huge numbers of teenagers roaming the streets and parks. In Plympton, Devon, officers posted a picture of abandoned bottles of cider, gas canisters and a packet of doughnuts on Facebook last week. They captioned the photo: ‘Do you know where your children are?’

Business owners in the seaside resort of Exmouth said officers have had to break up two brawls on the beach which then spilled into the town centre in the past week. 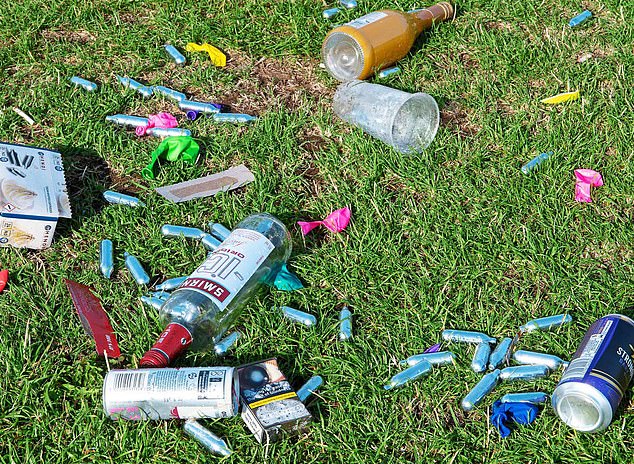 Cafe owner Jacqueline Haywood, 57, said: ‘It’s a rare day that we don’t call the police to report it but they tell us they don’t have the manpower to properly clamp down. The last three summers have been bad but this year it’s even worse. Kids have been coming in from Exeter during the lockdown. We’ve had outdoor furniture smashed up.’

In the upmarket spa town of Harrogate, North Yorkshire, locals quip that they are host to the ‘Unofficial Covid Festival’. Almost every night, hundreds of youths, most of school age, gather in the town’s park, The Stray, where the heavy fug of cannabis smoke fills the air.

Every morning it is left to good samaritans and council workers to clear up the blanket of empty beer bottles and rubbish the youths leave behind. ‘We’re absolutely sick of it,’ said a woman in her 70s whose flat overlooks the park. She added: ‘Most of us are just praying for the day they all go back to school. For me, it can’t be soon enough.’

On the outskirts of the London park on Thursday evening, our reporters witnessed teenagers inhaling hippy crack from brightly coloured balloons.

Some scantily clad young girls were spotted running around in circles, seemingly high on the gas that temporarily starves the brain of oxygen.

As the sun set, two men pulled up in a sports car outside a church and began brazenly selling the balloons from the back of the vehicle. Two young girls, who looked around 15 years old, giddily sucked in the gas from balloons.

They were joined by three male teenagers, who passed a large joint around as they sat on the grass which was littered with empty bottles of alcohol.

Groups of children, who looked around 14 and 15, were spotted hanging outside a corner shop nearby as older boys went in to buy the alcohol for them.

Later in the evening, three male teenagers were seen swaying in the street. One of them collapsed on the floor and drunkenly sat up against a parking meter with his eyes closed. The debauched scenes have alarmed charities and campaigners who fear the lockdown will cause lifelong damage to young people.

Rebecca Brown, chief executive of victim support charity ASB Help, said: ‘We know that anti-social behaviour is a gateway into serious criminal behaviour for young people. Organised crime groups are deploying sophisticated methods to exploit, recruit and manipulate young people who would ordinarily be safeguarded by the school system.’ 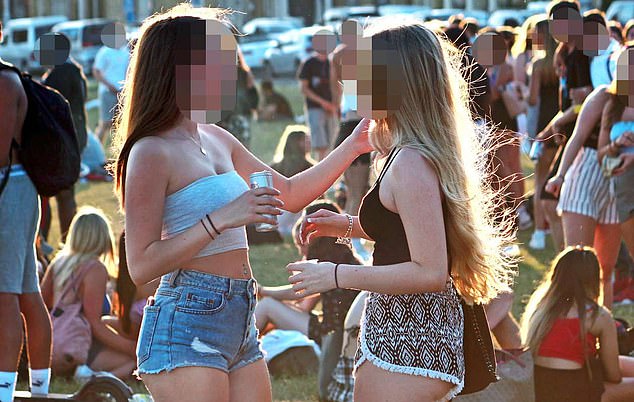 Two girls partying in Hove. For hundreds of thousands of parents – concerned that their teenagers are losing their way – the return to school cannot come soon enough

James Simmonds-Read, of the Children’s Society, which helps children to escape from gangs, warned that county lines criminals were busy grooming children during the lockdown, including middle-class teenagers.

He said: ‘We are seeing children from more affluent backgrounds, who are attending private schools…We know for sure that parks are a place where children are identified, groomed and exploited.’

A recent report by the National Youth Agency warned: ‘With schools, colleges and youth centres closed, many young people are now in potentially unsafe environments.’

Alarmingly, the charity said as many as 300,000 children now know someone in a gang.

Youth workers in Berkshire, Buckinghamshire and Oxfordshire said criminals are currently competing to recruit young people to carry and sell drugs to expand their reach with new supply lines.

Former Education Secretary Justine Greening last night hit out at the Government for failing to plan for the ‘entirely foreseeable’ problem of bored youths congregating.

She said: ‘The Government could have called in [Met Police Commissioner] Cressida Dick right at the beginning of this to say, “If this nice weather keeps going and the kids are out of school, they are going to want to see their friends”. And it doesn’t take a genius to know there might be some trouble and actually, isn’t that why we do loads of summer activities for them when they are out of school?’

She said that a ‘joined-up’ strategy should have involved the teaching unions from the start, adding: ‘Parents wanted to see unions round the table coming up with solutions too, instead of children’s education just becoming a political football.’