Charity worker, 56, is spared jail for assaulting a child

Mary Blewitt OBE, 56, arrives at Westminster Magistrates’ Court for a hearing on March 21

A charity worker who won an OBE for her work with Rwandan genocide survivors avoided jail today for assaulting a child after a judge said she had led a ‘exceptional and very traumatic life’.

Mary Blewitt, 56, attacked her daughter Christina Blewitt, 24, and a young girl at her home in Earl’s Court, West London.

She then crawled around the floor, accusing her son Richard of having ‘no balls’ and reached out for his genitals, Westminster Magistrates’ Court heard.

District Judge William Blake said: ‘It is very sad to see you in in court. You have led an exceptional life and a very traumatic life. Particularly on the anniversary of events which are central for you to find yourself in court.

‘I am sure your behaviour and this court appearance is about your problem with alcohol which you resorted to to come to terms with events in your life for most of us impossible to conceive.

‘You are someone of exceptional character, not just good character, who never imagined would be in this court. 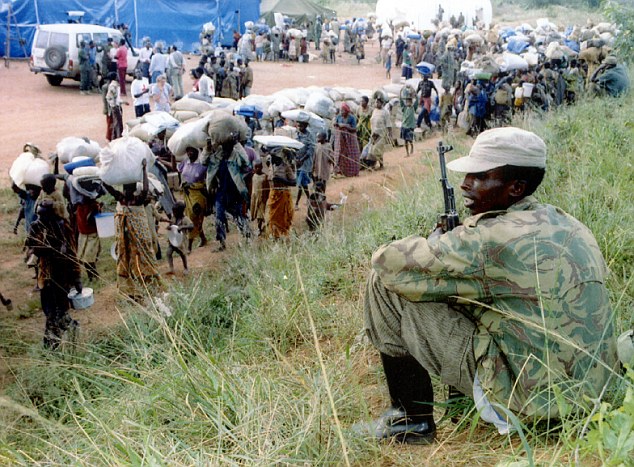 ‘It is time to move on and resolve as best you can your problem with drink. This is a chance for you to get on with your life, and hopefully in time repair the problems with your family.’

Blewitt, who attended court in a dark blue coat and hair wrap, nodded her head at the judge’s remarks.

Prosecutor Dami Eniola told the court in an earlier hearing that Ms Blewitt and her brother were spending Christmas at Blewitt’s house.

‘Whilst she was at the defendant’s house she noticed that the defendant had been drinking and this continued on the next day, that was Christmas Day.

‘On Christmas Day the defendant made derogatory comments. When Ms Blewitt responded to one of the remarks she tried to swing at her, missed and ended up hitting the child instead.’

Blewitt then ordered her daughter out the house.

‘While she was gathering her belongings in order to leave the defendant threatened to push her and child down the stairs,’ said Ms Eniola.

Ms Blewitt said: ‘She had obviously had a lot to drink at that point.

‘She started saying things to the child who started crying,’ she added.

‘What sort of things?’ asked the prosecutor.

‘You are crying because you are a pussy, you are all pussies,’ she replied.

After that, the woman picked up the child and moved to the opposite end of the living room.

‘She followed me and tried to hit me. She missed and accidentally hit the child. She was just slinging around she struck the child by mistake,’ she added.

Ms Blewitt claimed she tried to leave but her mother said: ‘If you come any closer I am going to push you down the stairs.

‘I told her ‘You are sick, how can you say that?’ I called her a drunk and she punched me in the face.’

Her brother Richard said Blewitt was extremely drunk and was getting progressively more argumentative.

He said: ‘She just tried to find arguments in this and that. This was over a period of maybe an hour and a half. At one point she told me ‘you have no balls’.

‘She fell onto the floor and was crawling towards me, trying to grab my balls.’

He eventually called the police.

Mary Blewitt founded Survivors Fund (SURF) to support survivors of the genocide in Rwanda and was awarded the OBE in 2008 for her work for the charity.

Blewitt denied but was convicted of two charges of assault by beating.

She was sentenced to a 12-month community order, with a 20 day rehabilitation requirement and a three-month drugs and alcohol treatment requirement.

She was also ordered to pay £350 in costs and an £85 victim surcharge.