Notorious prisoner Charlie Bronson has called the jail chaplain a ‘disgrace’ for failing to set a date for his wedding to a former Coronation Street actress.

Britain’s ‘most violent prisoner’, whose real name is Charles Salvador, sent a letter of complaint after a meeting between the governor and prison chaplain was cancelled.

Writing from his cell in the segregation unit at HMP Wakefield he said he submitted a ‘request to marry’ fiancee Paula Williamson in June and paid a £350 fee for the wedding to be arranged.

But he said he had still heard nothing and didn’t have a date for his wedding.

He first struck up a relationship with Miss Williamson – who also had roles in Emmerdale and Hollyoaks – back in 2013 after they started writing to one another.

On Valentine’s Day this year Bronson, who also calls himself Charles Salvador after the artist Salvador Dali, popped the question.

But he has accused officials of trying to block his wedding.

He wrote in the complaints form, dated August 11: ‘You are doing everything in your power to stop my wedding and mess my bride-to-be up.

‘A month ago I submitted my request to marry. Nobody has been to my cage door to discuss it or give me a date.

‘Your priest spoke to my bride Paula and told her he will pop in on my visit on August 11 to see us both – the two-faced liar never even turned up.

‘Plus he’s had all the details given to him by a CSC (Segregation) staff.’

His letter continued: ‘It’s an absolute disgrace – causing stress for my wife-to-be.

‘Although the No1 Governor came on the visit to apologise to my beautiful bride I now feel there’s a conspiracy to mess me up.

‘How can I get a date to marry when the Sky Pilot (slang for a preacher) won’t even show his face – it’s a complete farce.’

He added: ‘The priest would turn up fast enough if I was going to the gallows to be hung.

‘I want a date for our wedding – stop playing games – get the registrar in.’ 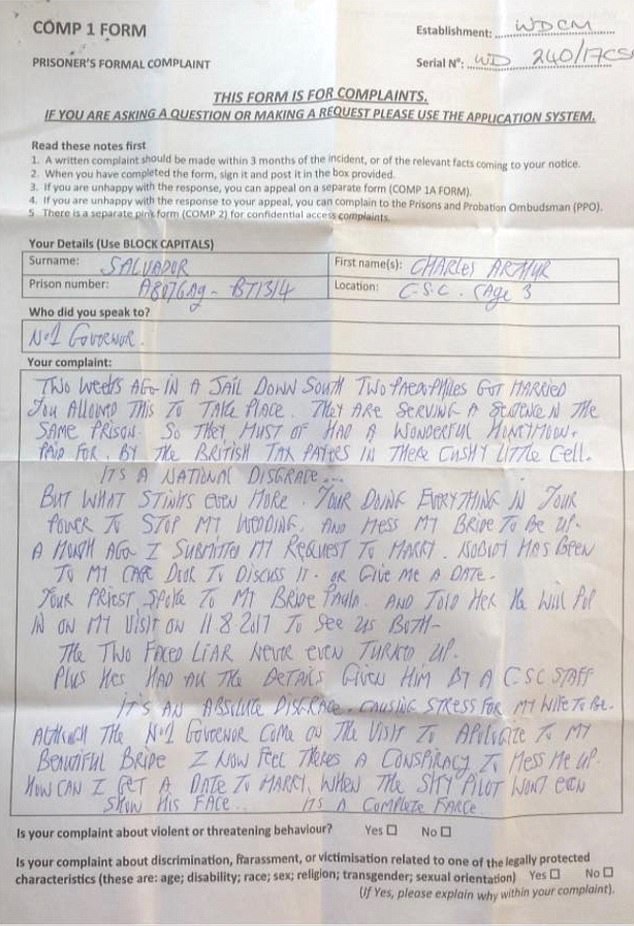 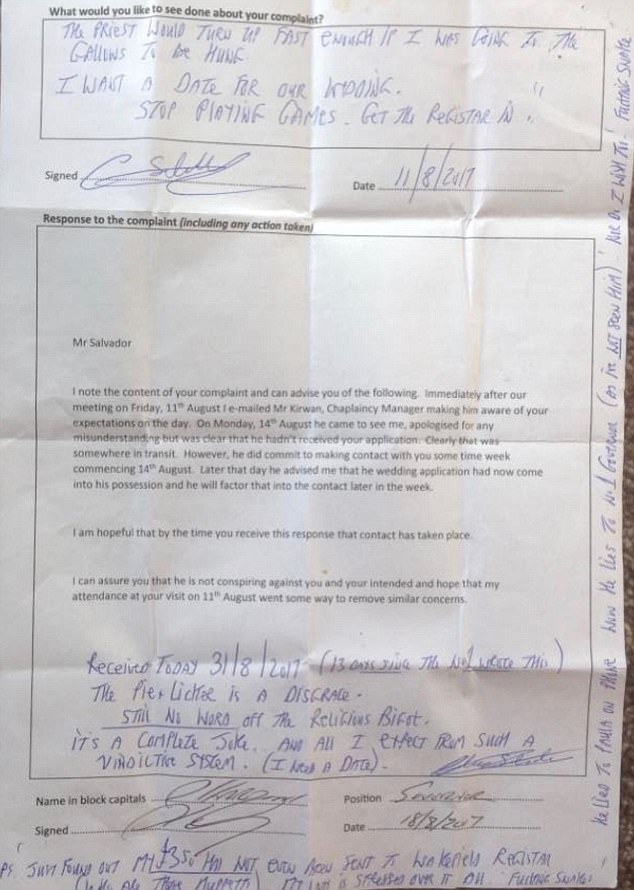 In response the prison chaplain told the prison he hadn’t received the application to marry as it ‘somewhere in transit’.

The letter from prison bosses added that the chaplain had subsequently received the letter to marry and was set to make contact with Bronson ‘later in the week’ commencing August 14.

But writing on August 31 Bronson said the meeting still hadn’t taken place with the chaplain, adding: ‘The pie licker (vicar) is a disgrace.

‘Still no word off the religious bigot. It’s a complete joke – And all I expect from such a vindictive system – I need a date.’

He added: ‘I just found out my £350 has not even been sent to the Wakefield registrar. My lady is stressed over it.’

Bronson has previously said he wants to have children with Miss Williamson, claiming he would be the ‘best dad in the world’. 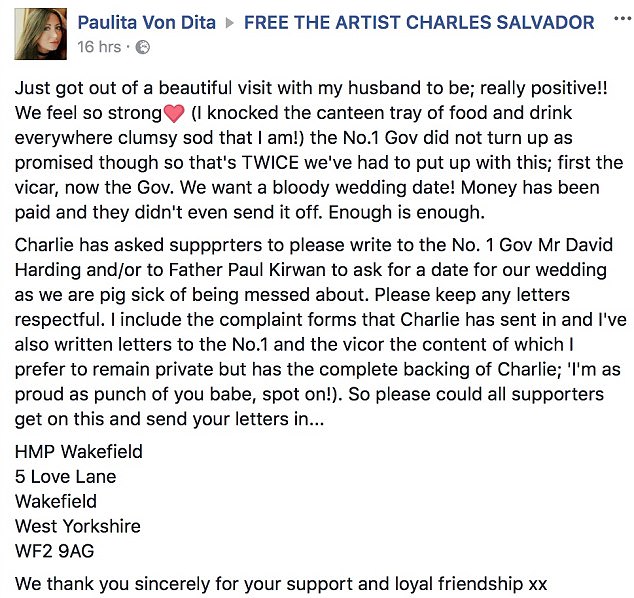 Writing on Facebook on Friday Miss Williamson, who refers to herself as Paula Von Dita, urged ‘supporters’ to write to the prison to put pressure on them

Writing on Facebook on Friday Miss Williamson, who refers to herself as Paula Von Dita, said the wedding plans still hadn’t been arranged.

She urged ‘supporters’ to write to the prison to put pressure on.

She wrote: ‘Just got out of a beautiful visit with my husband to be, really positive!!

‘We feel so strong (I knocked the canteen tray of food and drink everywhere clumsy sod that I am!) the No.1 Gov did not turn up as promised though so that’s TWICE we’ve had to put up with this.

‘First the vicar, now the Gov. We want a bloody wedding date! Money has been paid and they didn’t even send it off. Enough is enough.

‘Charlie has asked supporters to please write to the No. 1 Gov Mr David Harding and/or to Father Paul Kirwan to ask for a date for our wedding as we are pig sick of being messed about.

‘Please keep any letters respectful. I include the complaint forms that Charlie has sent in and I’ve also written letters to the No.1 and the vicar the content of which I prefer to remain private but has the complete backing of Charlie (‘I’m as proud as punch of you babe, spot on!). So please could all supporters get on this and send your letters in.’

She then give the address of HMP Wakefield, adding: ‘We thank you sincerely for your support and loyal friendship xx.’

Salvador, real name Michael Peterson, was first locked up for armed robbery in 1974, but during his time inside he has taken hostages in 10 prison sieges, attacked at least 20 prison officers and caused £500,000 in damage in rooftop protests.

In 1999 he was given a life sentence after taking prison art teacher Phil Danielson hostage at HMP Hull after he criticised one of his drawings.

Salvador, who does 2,000 press-ups a day, tied a skipping rope round the teacher’s neck and led him about ‘like a dog’ while holding a knife and broken bottle to his throat before releasing him after 44 hours.

He now claims to be a ‘changed man’ and has passed a number of violence reduction courses in jail and is appealing against his life sentence.

He is currently serving a life sentence in HMP Wakefield, from where his letter is addressed, and has been jailed for most of the last 43 years – 37 of which have been in solitary confinement.

In recent years he has turned his hand to art and changed his surname from Bronson to Salvador in tribute to the Spanish surrealist artist Salvador Dali.