Britain’s most violent prisoner Charles Bronson smeared himself in butter to start a ‘Valentine’s Day rumble’ with prison guards.

The 65-year-old convict was upset he was unable to see his wife Paula, 37, and give her a card on the most romantic day of the year.

So he decided to take his clothes off and rub himself in butter to make it more difficult for prison guards at HMP Frankland to catch him, reports the Mirror.

Bronson, who is one of the UK’s most notorious inmates, was injured in the scuffle,  hurting his shoulder when he was taken down by 12 guards.

Staff at the Durham jail managed to wrestle him to the ground and take him back to his cell.

Charles Bronson (pictured) was upset he was unable to see his wife Paula, 37, and give her a card on the most romantic day of the year so he smothered himself in butter to start a ‘rumble’ with guards at HMP Frankland in Durham

A source told the newspaper: ‘He was wanting a rumble but he ended up being the only one who got hurt – not like the old days.’

This is not the first time Bronson, who is serving a life sentence for armed robbery, GBH, blackmail, false imprisonment and threatening to kill, has used butter in his bid to evade justice.

In May 2014 he buttered himself up after Arsenal beat Hull in the FA Cup final.

The furious Spurs fan smeared himself in the dairy product in fury that his rivals were victorious.

In a letter to Kate Kray, the ex-wife of London gangster Ronnie Kray, written two days after the incident, Bronson revealed how he was left with broken ribs after the scuffle.

Excerpts from the letter, which was obtained by the Daily Mirror, revealed how he had ‘visions’ of Mrs Kray’s husband, who died in 1995, just before he flew into a rage because of the football result. 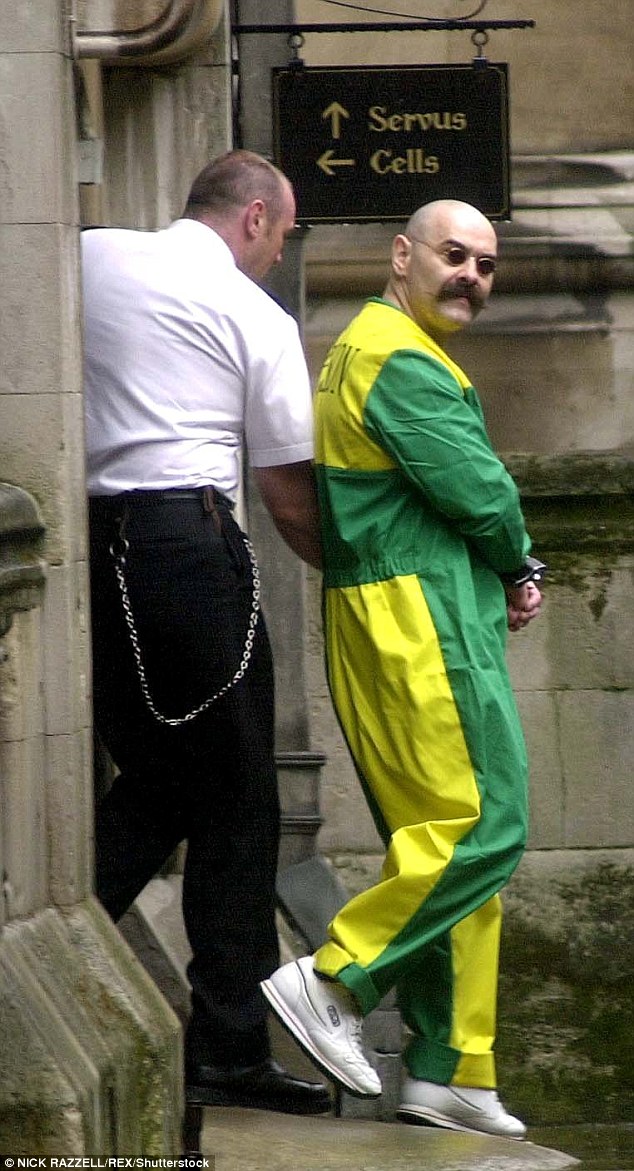 Bronson (pictured at Woodhill Prison in Milton Keynes in 2001), who is one of the UK’s most notorious inmates, was injured in the scuffle, hurting his shoulder when he was taken down by 12 guards

He wrote: ‘I so wanted Hull to win, coz (sic) I’m Spurs. I got Lurpak and spread it on thick.’

Soap star Paula Williamson married Bronson in front of just four people and the career criminal wore a trilby and Union Jack shoes for the bizarre ceremony in February 2017.

The pair tied the knot behind the walls of high-security HMP Wakefield where Bronson was previously held, walking down the aisle to the Death March.

During their first dance, the armed robber ripped his new bride’s dress by stepping on it before he serenaded her with a version of Frank Sinatra’s My Way.