With all eyes on Tokyo as the Olympics gets underway, there’s been a surge in popularity of Japanese-inspired cuisine from UK shoppers, with Waitrose seeing sales of their Tuna Tataki Salad increase on 91 per cent on while their Roku gin sales are up 1,180 per cent.

But Japanese cuisine is hugely misrepresented in the UK, according to British-Japanese 2012 MasterChef finalist Andrew Kojima.

Andrew – who goes by Chef Koj – has his own Japanese restaurant Koj Cheltenham, which has no sushi on the menu, like 90 per cent of the restaurants in Japan.

apanese cuisine is hugely misrepresented in the UK, according to British-Japanese 2012 MasterChef finalist Andrew Kojima, pictured

‘It’s a great shame we can’t go to the Olympics in Tokyo this year. I’d been greatly looking forward to the 2020 Olympics, as it was another chance for me to showcase the variety in Japanese food, less than a year after the Rugby World Cup,’ he told FEMAIL.

‘The most common comment I hear from people who have returned from Japan, the first one is that it is completely unlike any other place on earth that they’ve been to The second comment is how they loved the food and how all of it was excellent.

‘It’s very hard to eat badly in Japan, even in the tourist destinations. But if you speak to people who have yet to go to Japan, the most common misconception is that it’s dominated by sushi.

‘That’s the way the cuisine is represented overseas, but it’s not a true reflection. I’ve been facing this misconception for so many years that I decided to open a restaurant that did not serve sushi, and then wrote a book called NO SUSHI’.

Speaking exclusively to FEMAIL. Koj, who is teaching a Japanese cooking course on Learning With Experts,  the only online course to offer one-to-one feedback directly from the experts in their field, revealed the most common misconceptions Britons think about Japanese cooking…

‘Less than 10 per cent of restaurants in Japan are sushi restaurants.

‘Sushi doesn’t even mean raw fish. It in fact means sour rice, which these days is achieved by dressing rice with sweetened vinegar.

‘So sushi must always be with rice, whereas sashimi doesn’t come with rice

KATSU ISN’T A TYPE OF CURRY

‘Katsu is not a type of curry! It’s actually an abbreviation of katsuretsu – which is the Japaninglish word for cutlets. 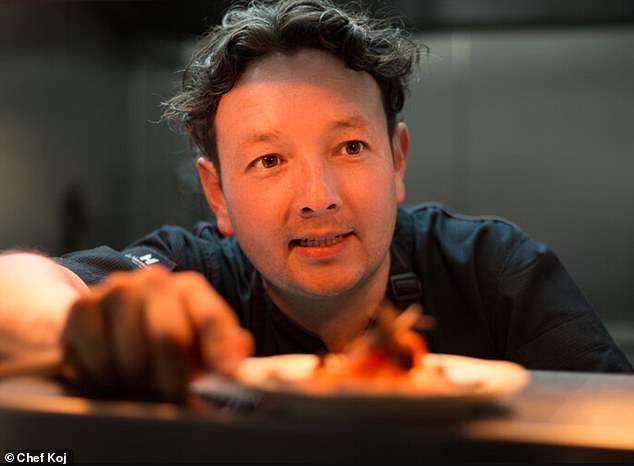 Andrew – who goes by Chef Koj – has his own Japanese restaurant Koj Cheltenham, which has no sushi on the menu, like 90 per cent of the restaurants in Japan.

STEP AWAY FROM THE SOY SAUCE

‘So many times in Japanese restaurants I see plates swimming in soy sauce.

‘I actually took soy sauce off the tables in my own restaurant, because it completely drowns any delicate flavours.

SAKE IS NOT A SPIRIT AND IT CAN BE DRANK COLD

‘Sake is not a spirit. Because sake is clear and served in little vessels, many people think it is a spirit and to be drunk like a shot.

‘In fact, it’s brewed like beer and is only a little stronger in alcohol than wine.

‘Sake doesn’t always have to be drunk warm.

‘Like mulled wine, serving it warm was sometimes a way of masking unpleasant tastes in cheap sake.

‘If you’re drinking good sake, you should try it at room temperature or even slightly chilled, especially in summer

IT’S NOT ALL LIGHT LUNCHES

‘Japanese food is healthy – Japanese people do tend to live longer than the global average, but there’s plenty of hidden sugar in sushi rice, and many of the most popular comfort foods are deep fried – fried chicken, tempura, tonkatsu.

‘Some of the foods most popular in Japan  have only been around for the last century and have been inspired by foreign influence (eg. ramen and gyoza from China, katsu curry sauce from India, tempura from the Portuguese)

BRUSH UP ON YOUR CHEF SKILLS WITH MASTERCHEFS

MasterChef finalists Matt Healy and Philli Armitage-Mattin, who both feature cooking some of their favourite dishes on mychefskills.com, shared the most common mistakes they see in the kitchen with FEMAIL.

You can add, but you can’t take away: when seasoning be sure not to add too much at once and to regularly taste for seasoning.

When making a sauce, always use good quality wine. You wouldn’t drink bad wine so why use a poor quality one during cooking?

Good seasoning: When cooking many people use cheaper seasonings which can result in a chemical flavour. Using top quality seasonings  can really make a difference with the end product, and when you’ve already spent a considerable amount of money on your meal, it’s worth spending that little extra 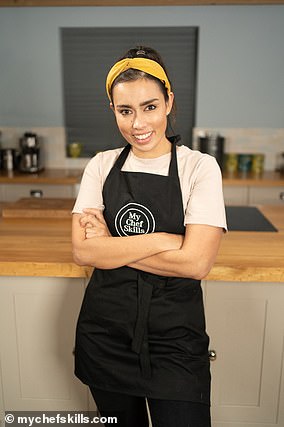 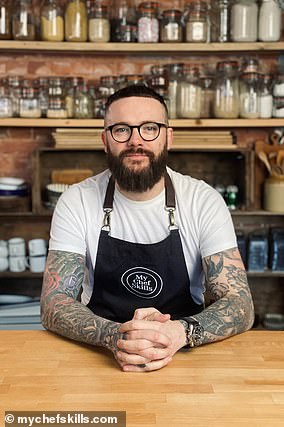 MasterChef finalists Matt Healy (right)  and Philli Armitage-Mattin (left) who both feature cooking some of their favourite dishes on mychefskills.com, shared the most common mistakes they see in the kitchen with FEMAIL.

Make it look organic: when assembling your dish arrange everything organically so it seems that everything has just fallen onto the plate. People’s perception is typically dominated by what their eyes see, so an organic arrangement is half the job of making a stellar dish.

Make a recipe your own. A recipe is there as a guide but the best chefs play around with different ingredients to make it their own

To find the best pan Asian ingredients, shop at your local Chinese supermarket

Get adventurous with edible flowers. They aesthetically transform a plate and bring in floral notes that will elevate your dish to a restaurant standard

When boiling greens, add bicarbonate of soda to the water. It preserves a compound called chlorophyll, which gives vegetables such as green beans, asparagus, Brussels sprouts and broccoli a vibrant, green colour