Chelsea supporters chanting ‘Roman Abramovich’ have clashed with French riot police ahead of their Champions League tie with Lille tonight.

Gendarmes in full riot gear moved in as a large crowd of Chelsea fans built up outside Les 3 Brasseurs bar (The 3 Brewers), opposite Lille-Flanders station.

As bottles were thrown, the police fired tear gas cannisters and sent in snatch squads to try and arrest ringleaders of the trouble, many of whom were drunk. 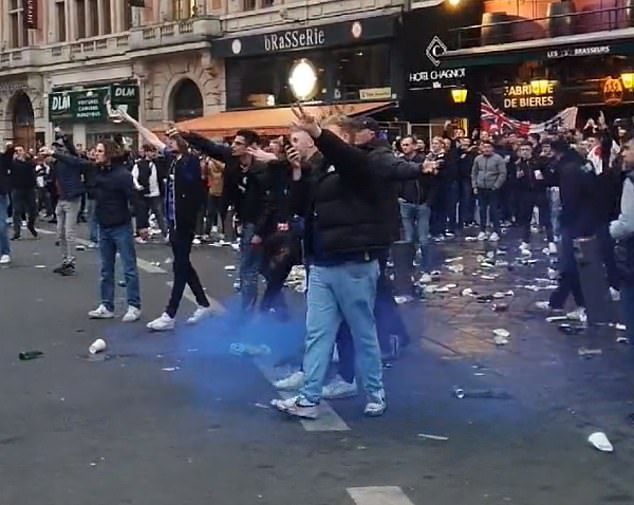 Gendarmes in full riot gear moved in as a large crowd of Chelsea fans built up outside Les 3 Brasseurs bar (The 3 Brewers), opposite Lille-Flanders station

‘We were called to the bar following complaints about the behaviour of the supporters,’ said a local police spokesman, who said the violence started soon after 6.30pm.

‘Roads around the area have been cordoned off and there are still isolated pockets of trouble around the city.’

Many of the Chelsea fans outside the Brasseurs started drinking on Wednesday morning, soon after arriving from the UK.

They were continually heard chanting the name of Roman Abramovich, the club’s owner who has been sanctioned by the British government, and by the EU, because of his links with Russian President, Vladimir Putin.

Many claim that Mr Abromovich has been found ‘guilty without trial’ following Russia’s invasion of Ukraine.

Rustam Doroshenko, a 27-year-old from Poltava, in central Ukraine, was among those Chelsea fans speaking up for Mr Abramovich. 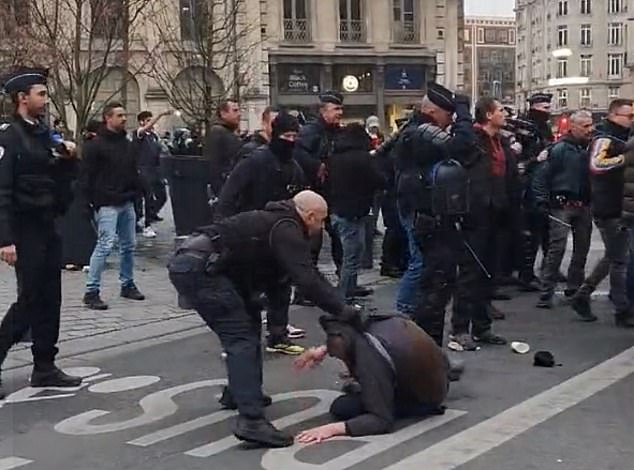 As bottles were thrown, the police fired tear gas cannisters and sent in snatch squads to try and arrest ring leaders of the trouble

While having absolutely nothing to do with the violence, Mr Doroshenko said: ‘His ownership of Chelsea has been a dream.

‘He is somebody who really cares for the club, and it looks like he is being found guilty and punished without any attempt at trial.

‘I am not a politician, but I do believe that Roman Abramovich should be shown justice and respect.

‘It is absolutely right that Russia is sanctioned for what it is doing in my home country, but punishing a British football club does not feel right.’

Mr Doroshenko said there were 246 members of the Chelsea supporters’ club in Kyiv, the Ukrainian capital, alone.

He was on the Polish border last week, after helping to get his mother and brother out of the country, but still has family members there.

‘The war is horrendous, and everything has to be done to bring it to a close, but that should not include attacking football clubs. 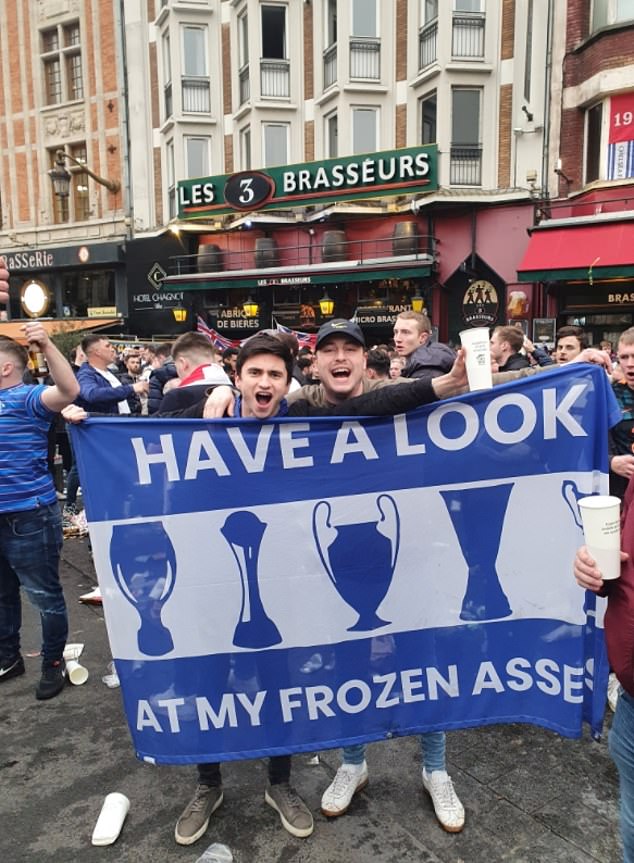 Many of the Chelsea fans outside the Brasseurs started drinking on Wednesday morning, soon after arriving from the UK

‘I’ve supported Chelsea for 15 years, and there are plenty of other Ukrainians who love the club.’

Diana Ataniyazova, 23, lives in Prague, and was carrying a ‘Prague Blues stand with Ukraine’ sign before the game in Lille.

‘This is to show that we are united with all those campaigning for the war in Ukraine to end, but it does not mean we have all disowned Roman Abramovich.

‘If he is found guilty following a trial, then that’s a different matter, but at the moment this has not happened.’

As well as chanting Abramovich’s name, fans also sang obscene chants about prime minister Boris Johnson, whom they blame for sanctioning the Chelsea owner without trial.

Chelsea’s Champions League match against Lille was itself threatened with cancellation after Mr Abramovich was sanctioned by the European Union — but UEFA later confirmed it would go ahead.

Chelsea was named by the EU as one of four ‘associated entities’ of Abramovich’s that were liable for sanctions.

A ruling on Tuesday read: ‘Roman Abramovich is a Russian oligarch who has long and close ties to Vladimir Putin. 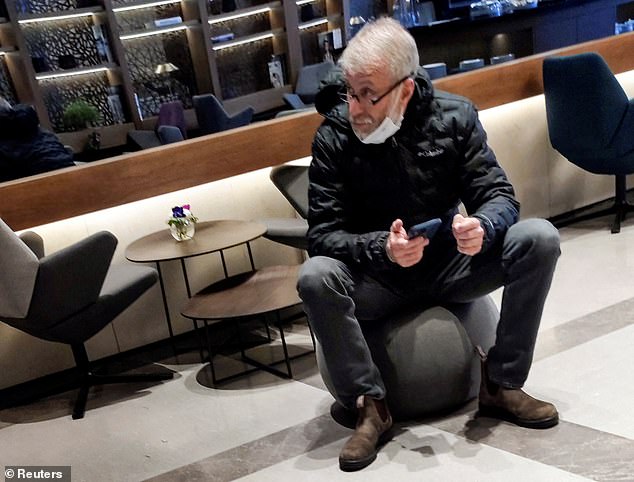 ‘He has had privileged access to the president, and has maintained very good relations with him. This connection with the Russian leader helped him to maintain his considerable wealth.

‘He has been benefitting from Russian decision-makers responsible for the annexation of Crimea or the destabilisation of Ukraine.’

Apart from Chelsea, the Evraz Group which is a major steel manufacturer, Evraz Holdings and Millhouse Capital are all name as associated entities of Abramovich’s.

Thomas Tuchel, the Chelsea head coach, hit back at government criticisms of supporters for chanting the name of Abramovich.

After learning that a Downing Street spokesman had called the chants ‘inappropriate’, Tuchel said: ‘I don’t know if, in these times, it is the most important discussion to have in parliament.

‘I don’t know if fan chants being discussed in parliament means we have to worry about the priorities of this government. We have far more urgent things to handle.’

Wednesday’s game was Chelsea’s first outside England since the Russian invasion of Ukraine.

About 2,500 fans, who bought seats before a ban on ticket sales was imposed as part of the sanctions package against the club, arrived in Lille, a city to which Ukrainian refugees who are seeking asylum in Britain were last week instructed to gather to apply for visas.

Tuchel said the impact of the spending limits that Chelsea are now subjected to — such as a cap of £20,000 on travel to domestic game — was being felt.

He said: ‘There are adjustments in the amount of staff who are travelling, how many rooms we have in hotels and how we arrive at matches.’