Chelsea fans slam limited-edition shirt marking last season’s Champions League win, labelling the £195 top a ‘JOKE’ and a ‘monstrosity’… before pointing out it is not even the one they wore against Man City!

A limited-edition Chelsea shirt to commemorate last season’s Champions League success has sold out online in less than two hours, despite fans slamming its design and huge price tag.

Thomas Tuchel’s side lifted their second European Cup back in May when Kai Havertz scored the only goal of the game in a 1-0 win over Manchester City in Porto.

To mark that achievement, Chelsea released a special shirt that has key moments from the game illustrated on it. But only 420 have been produced and one will set you back a staggering £195. 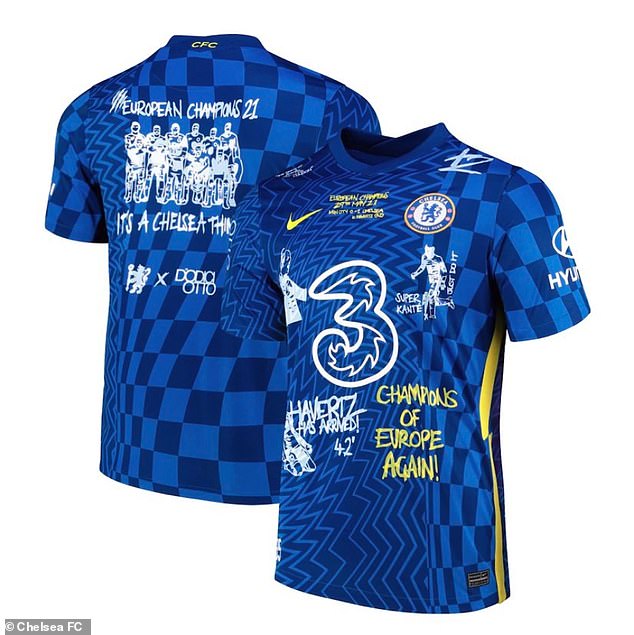 The shirt did not go down well with supporters who blasted the design and the fact that it is based on this season’s shirt, not the one they actually wore for the final in Porto.

Highlights from the match, including Havertz’s knee-slide celebration, N’Golo Kante’s man-of-the-match performance, Thomas Tuchel’s post-game reaction and the starting line-up all feature on the shirt’s pattern.

In collaboration with art-inspired brand Dodici Otto, the iconic moments have been digitally transformed into illustrations that have been hand printed onto the shirt.

For those fans who were lucky enough to snap one up online on Wednesday, each shirt will be delivered in a special box signed by the artist who created it. 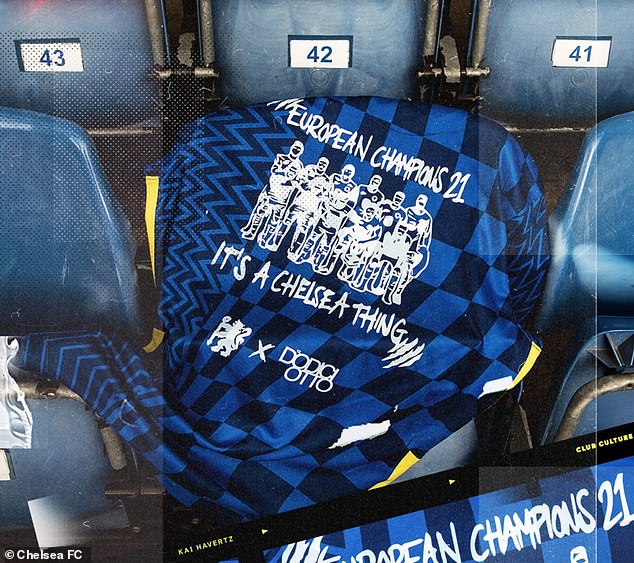 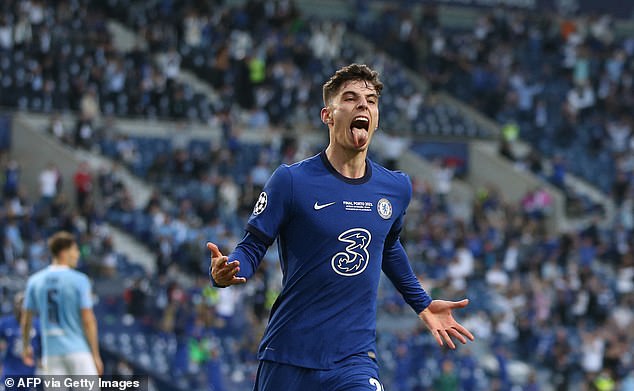 Although it sold out in just a few hours online, there are still some available from the club shop at Stamford Bridge.

It comes despite scathing criticism from supporters online over the design of the shirt and the price.

One supporter tweeted: ‘Do they think were 10 yrs old? This club needs to start making classier shirts’.

Another agreed, adding: ‘Who do I pay £195 to make sure I never have to look at this monstrosity again?’

@dave2801epic commented: ‘If it was on the kit we actually won the UCL on then yeah maybe I’d consider it’.

@thelonepony agreed, posting: ‘£195? Is that a joke? And it’s not even on the shirt we won the Champions League in!’.

@KM07070 was equally damning, tweeting: ‘What the heck is this treating us like 6 years old kids. Expected something fancy, something worth buying’.

While they will not be wearing the kit, Chelsea return to Champions League against Swedish side Malmo on Wednesday night.

Chelsea are second in Group H with three points from two games, three behind leaders Juventus, while Malmo are bottom and have yet to pick up a point.

The Blues will be desperate to return to winning ways after suffering a 1-0 defeat by Juventus in their last group game.