Thibaut Courtois ramped up his preparations to face Barcelona as he took part in an intense reaction test which showed off his cat-like reflexes.

Working with Chelsea goalkeeping coach Gianluca Spinelli, the Belgian stopper focused on the orange and white balls launched in his direction as he looked to prevent any from passing him.

The aim of the game is to catch the ping pong balls and drop them into buckets either side at lightning-fast speed and, in the video uploaded to his Instagram account, Courtois looked like a seasoned pro at the challenge. 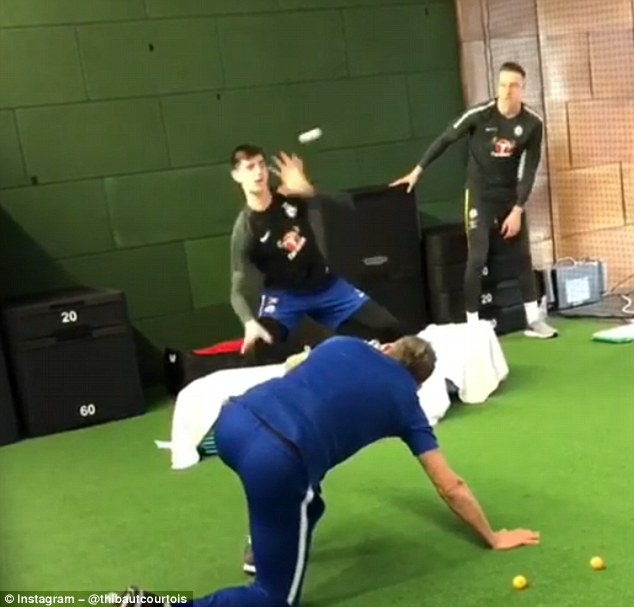 Development squad goalkeeper Marcin Bulka, 18, watched on as Courtois showed him how it is done with a performance which will impress both Blues supporters and his potential suitors.

While Courtois is tasked with keeping Lionel Messi and Co at bay in west London on Tuesday night in the Champions League, he could have more match-ups against the Catalan side if Real Madrid get their way.

He has been regularly linked with a move to the Bernabeu as Los Blancos search for a star name to replace current No 1 Keylor Navas at the end of the season. 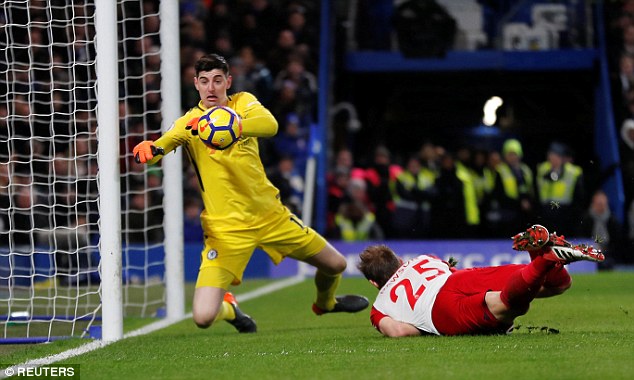 Yet to sign a new Chelsea deal, Courtois remains Real Madrid’s No 1 target for the summer

And Courtois’s impressive reactions show exactly why he is on Zinedine Zidane’s radar as the Madrid boss looks to revamp his squad after a sub-par campaign to date.

Courtois is yet to sign a contract extension with Chelsea, with the club and player unable to agree terms so far.

A strong performance in the upcoming knockout ties against Barcelona may prove decisive for Madrid to firm up their interest with an offer ahead of the World Cup this summer.