Chelsea underlined their ambition to win th UEFA Youth League for the third time as they smashed Molde 10-1 in their opening match on Wednesday afternoon.

Both Billy Gilmour and Daishawn Redan netted hat-tricks in the rout of the Norwegian side at their Cobham training ground as club legend John Terry watched on.

Charlie Brown scored twice, George McEachran notched the tenth goal and there was also an own goal as the hapless visitors were put to the sword.

Chelsea, winners of the continental under-19 competition in 2015 and 2016 as well as last season’s runners-up to Barcelona, must go through a slightly different route in the tournament this time around.

Because the senior side didn’t qualify for the Champions League this season, the young Blues don’t have a place in the main Youth League group stage draw, which mirrors its big brother tournament.

However, because Chelsea are the reigning champions of the Under-18 Premier League, they earned a place in the ‘Domestic Champions Path’ side of the Youth League competition.

This consists of two knockout rounds and then a play-off against the eight group runners-up in the main draw before progressing to the last-16 and so on.

And Chelsea confirmed their status as the stalking horses of the ‘Domestic Champions Path’ with this crushing win which almost equalled the Youth League’s record margin of victory. 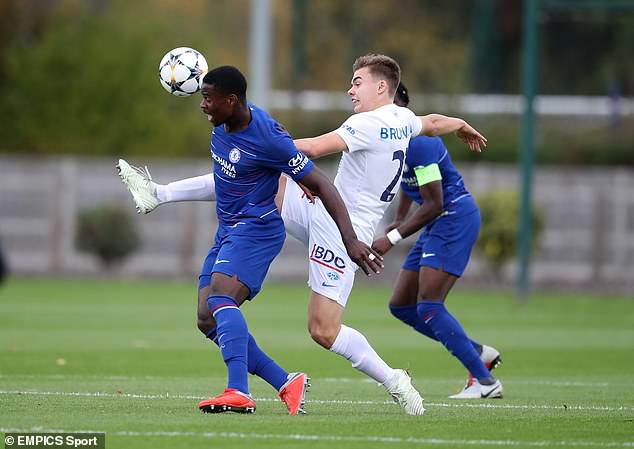 Marc Guehi, the Chelsea defender, fights for the ball during his teams resounding win

That distinction belongs to Real Madrid, who beat APOEL Nicosia 10-0 in the group last year, while Benfica won 11-1 away to Galatasaray in the 2015-16 group phase.

Joe Edwards’ Chelsea side dominated from kick-off and took the lead after 14 minutes when Brown finished from close range after Conor Gallagher wasn’t quite able to find a route through a crowded penalty box.

The lead was doubled nine minutes later when Tariq Lamptey’s cross was touched into his own net by Molde defender Thor Olav Moe under pressure from Redan.

Just a couple of minute afterwards, Gilmour got on the scoresheet with a header back across goal from Gallagher’s cross.

Chelsea were rampant and three became four in the 26th-minute when Redan stole in front of his marker to meet Brown’s well-aimed cross from the left side.

The fifth followed when Chelsea passed their way through the shell-shocked Molde defence for Lamptey to pop up a cross that Gilmour hammered home on the volley.

Redan grabbed his second shortly before the break for the sixth and there was even time for a seventh before the half-time whistle blew thanks to Brown’s individual effort. 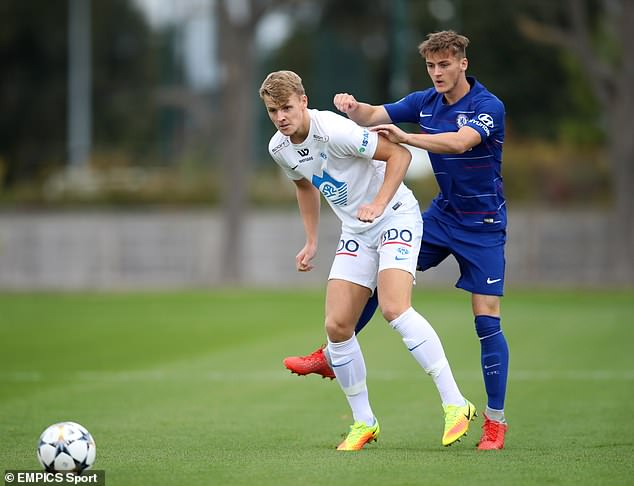 Chelsea clearly had no intention of easing off in the second-half, with Redan completing his hat-trick on 50 minutes with a rifled shot past Oliver Petersen.

Gilmour completed his treble with another header seven minutes later and double figures were reached when McEachran flicked a shot over the keeper following great work by Redan.

Molde, to their credit, didn’t give up all heart and pulled back the most Pyrrhic consolation through Anders Iversen after 72 minutes.

The second leg takes place in Norway on October 24.