So near and yet so far for Chelsea. While their dream of reaching a first Women’s Champions League final will have to wait, this performance against the mighty Lyon proved they aren’t too far away.

That a team that has made such an imprint on the European game these past few years should find themselves committing niggly fouls and defending desperately spoke volumes for Chelsea’s spirited display. 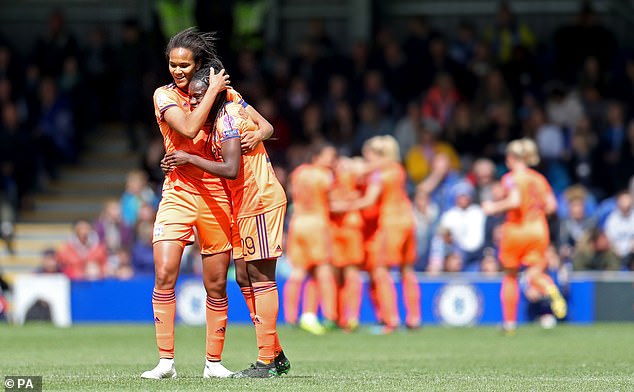 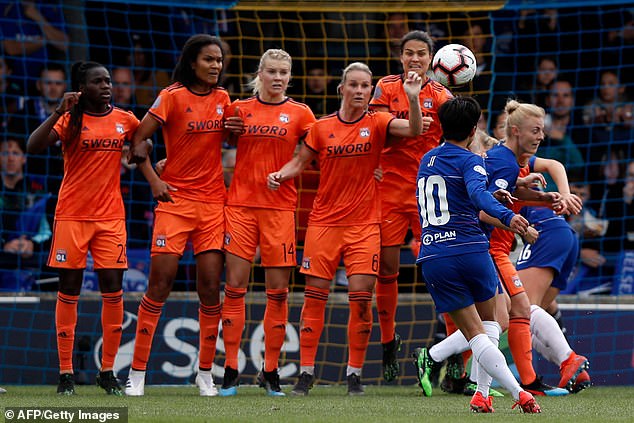 So Chelsea fall at the semi-final hurdle for the second consecutive season and Lyon march into yet another European final, their ambition to win a remarkable fourth consecutive Champions League very much alive.

The French club will play Barcelona, who overcame Bayern Munich 2-0 on aggregate, in Budapest on May 18.

But surely Barcelona won’t push them as far as Chelsea did here. The tie hung in the balance throughout and if the hosts had taken their chances, Lyon’s reign would be over.

Chelsea will certainly rue Fran Kirby’s saved penalty in the first leg but Lyon certainly knew they’d been in one hell of a match.

Chelsea manager Emma Hayes had called for a boisterous atmosphere and certainly got one at a sold-out Kingsmeadow as the locals tried to roar the Blues back into the tie.

It was hoped that the claustrophobic confines and packed terraces of AFC Wimbledon’s ground would unsettle the serial winners from France. 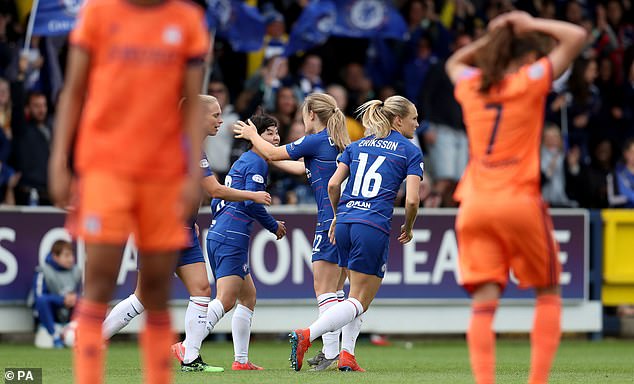 The Chelsea players celebrate with Ji So-yun following her goal

But Lyon – who have just wrapped up a 13th consecutive league title – have played in so many of these occasions they are expert at how to manage them.

And from the outset they dominated possession to negate any danger of Chelsea gaining a potentially pivotal early goal that would have levelled the aggregate tallies.

Lyon were able to squeeze Chelsea without necessarily creating a host of chances in the opening exchanges, though Amadine Henry did head over from a free-kick.

Yet there was a sense of inevitability when the visitors did go in front on 17 minutes. They broke swiftly down the right, moving the ball into Chelsea’s penalty box, with Ada Hegerberg shifting it on to Le Sommer.

Her low shot was goalbound, but took a deflection off the trailing leg of Maren Mjelde and perhaps that explains why keeper Ann-Katrin Berger allowed it to squirm under her body. 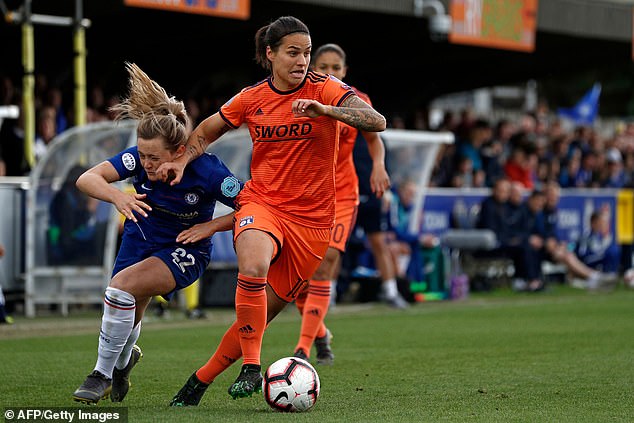 Take a moment to consider Chelsea’s equation at this moment – they needed to score twice to force extra time or three times to advance. No mean feat considering Lyon’s prowess and pedigree.

Yet as you’d expect of them, they attacked the challenge. Moments after the goal, there were ferocious handball shouts from the Chemflow End after Erin Cuthbert’s header bounced up off Lucy Bronze’s foot onto her arm. But Swedish referee Sara Persson waved away appeals.

But Chelsea nibbled away and when Cuthbert skipped through on goal, she was dragged down by Delphine Cascarino. The official pointed for a free-kick despite Cuthbert falling well inside the area.

Not that such trivialities matter to Ji. The Korean ushered her team-mates away from the dead ball and curled the free-kick over an enormous wall and beyond the reach of Sarah Bouhaddi.

For a spell, Lyon looked genuinely rattled. Who were this team that had the audacity to score twice against them in a semi-final tie? The fact Bouhaddi interrupted Chelsea’s attempts to retrieve the ball for the restart, earning herself a yellow card, said it all. 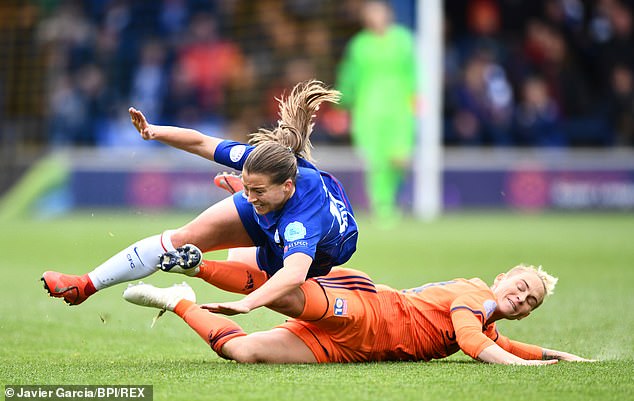 Half-time arrived at just the right moment for Lyon to regroup and the early stages of the second-half saw Chelsea defending for their lives.

But out of nowhere, Chelsea struck the woodwork through Karen Carney. They surged down the left, with Ramona Bachmann playing a pass out wide to Carney in plenty of space. She looked to cross but opted to shoot and her curler from what seemed an optimistic angle cracked back off the far post.

Lyon were suddenly living on their wits, with Millie Bright attacking a high cross from a set-piece before Bouhaddi denied her at point-blank range as the ball bounced invitingly. 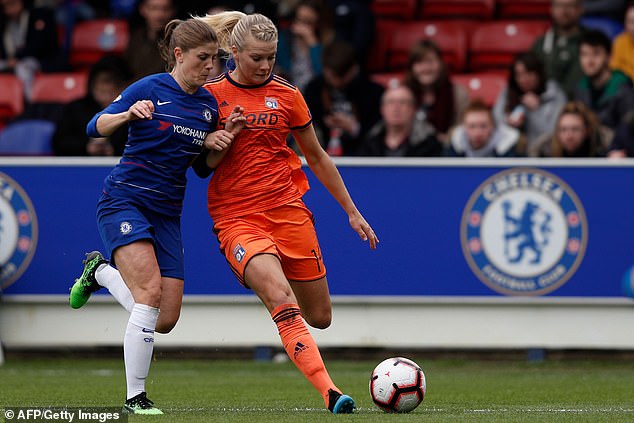 But again Lyon somehow managed to disrupt Chelsea’s rhythm, whether with a foul in midfield or a pop-shot from distance. Anything to make Chelsea reset themselves.

Hegerberg wasn’t too far away with a header and then ruffled the side-netting following Shanice van de Sanden’s flick. In stoppage time, Hegerberg blazed over from tap-in range.

Just prior to that, Drew Spence, not long on the field from the bench, guided the ball wide from Cuthbert’s free-kick at the back post when she should have scored.

And such missed chances were, ultimately, all that separated them.