The Spring racing season got off to a glamorous start this morning as revellers descended on Cheltenham racecourse.

While the nippy March weather meant most people found it a little too early for floaty frocks, attendees put a chic spin on warmer country casuals as they arrived festooned in feathered hats and furry trims.

Proving they can hold their own against the glamour of Ascot and Aintree, revellers donned fashionable staples such as over-the-knee suede boots and even leather leggings.

While some racing fans opted to keep warm in huge Cossack-style hats, others braved the chill in body-con dresses and heels. 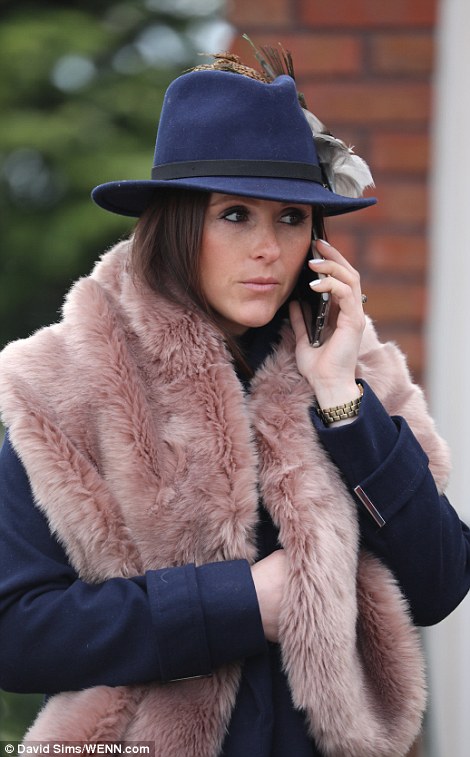 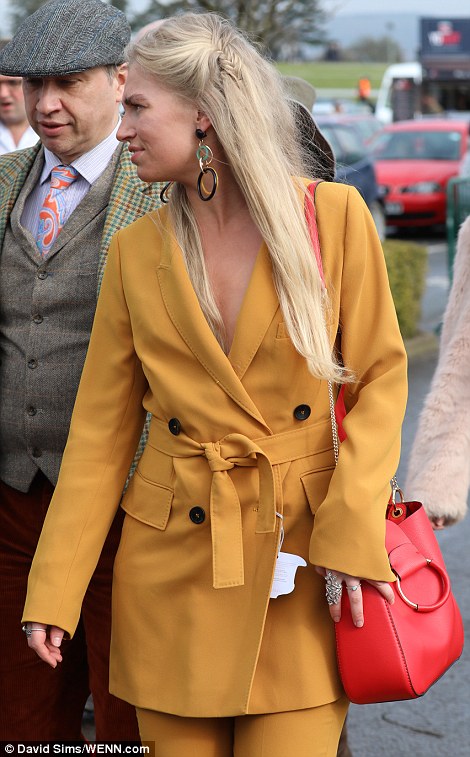 A racegoer kept the spring chill at bay in a very cosy-looking pink fur stole. One of the more colourful attendees stood out from the crowd in a vibrant mustard two-piece, with a statement red bag (right) 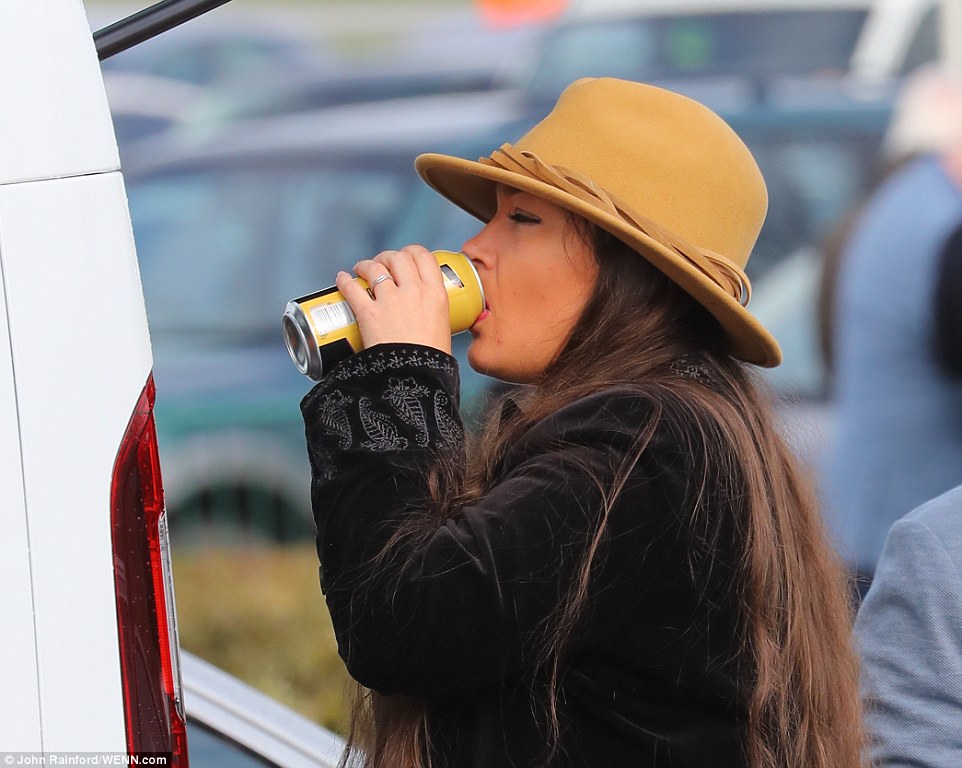 Getting the party started! Revellers were keen to get into the spirit of things as soon as the gates opened 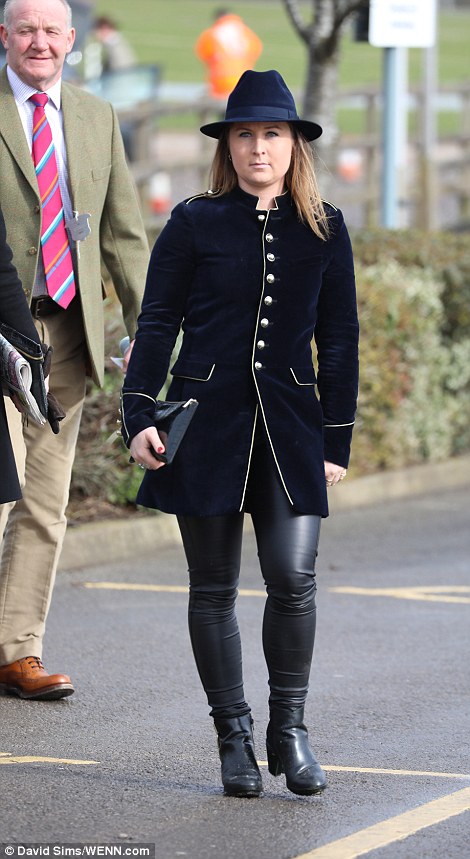 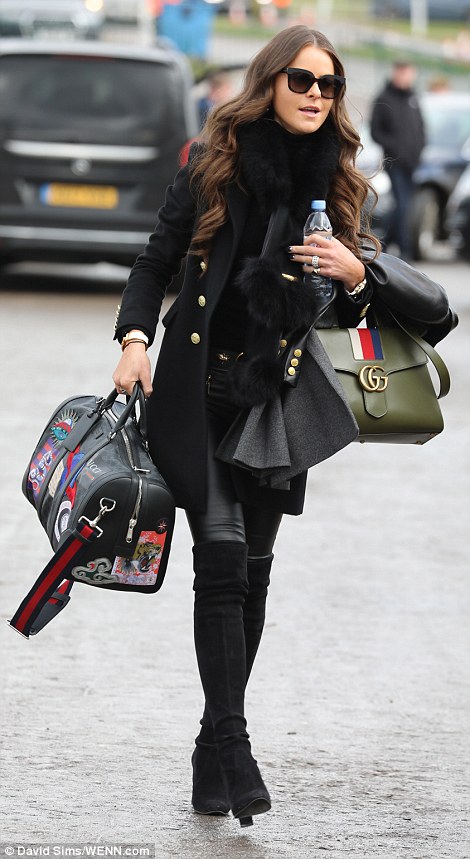 One woman put an edgy spin on traditional racing fashion as she stepped out in leather leggings. Another opted for a similarly daring look in a short jumper dress teamed with flat boots 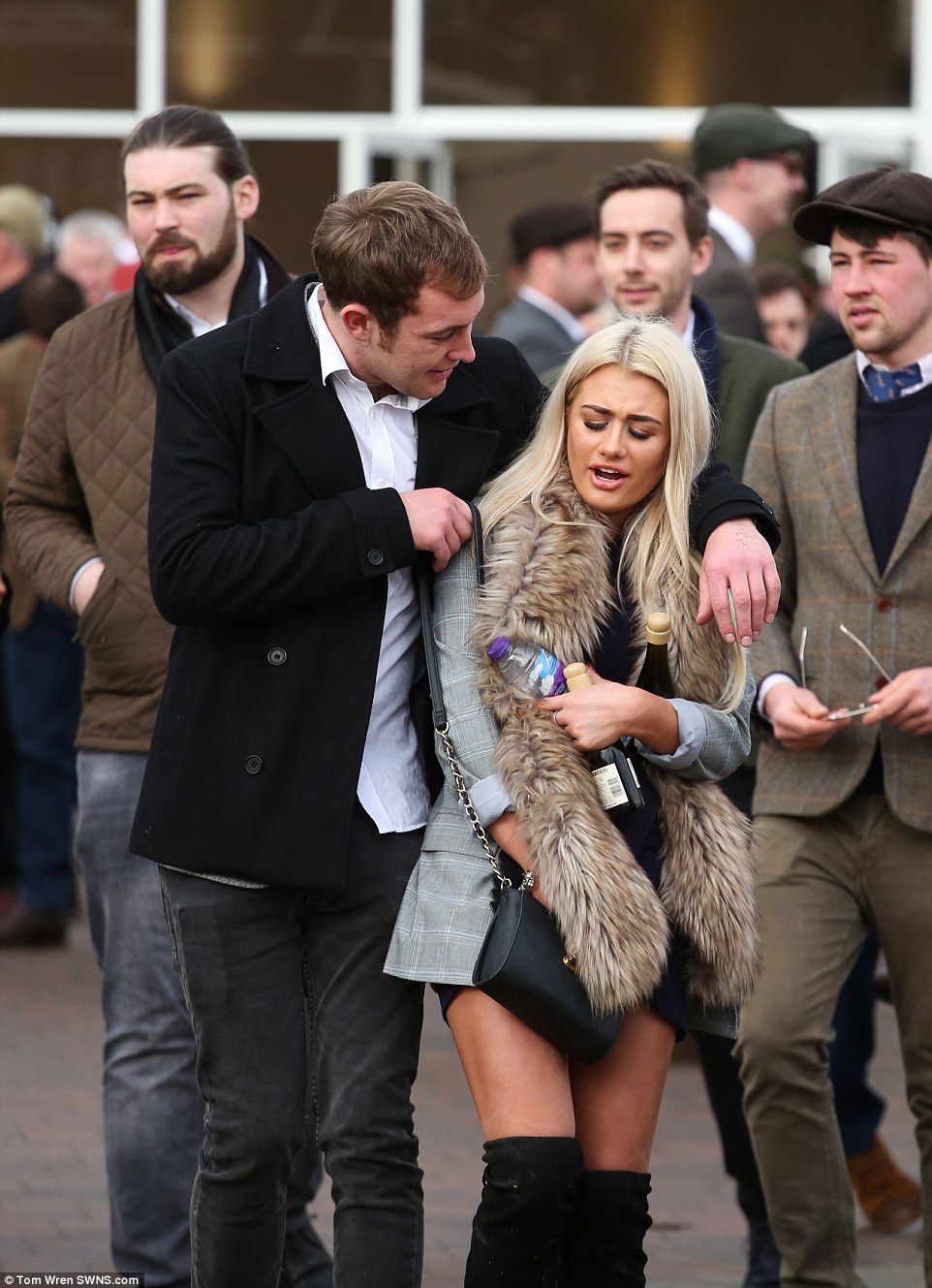 A man shared a tender moment with his female companion, throwing his arms around her as they made their way in to the racecourse 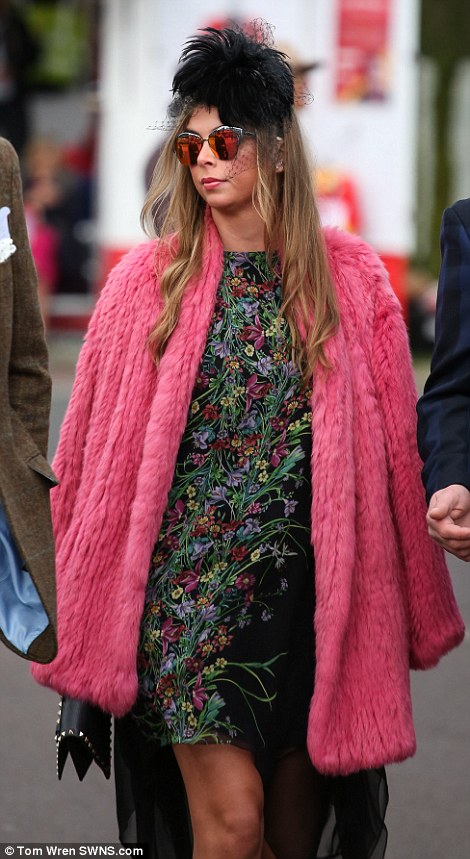 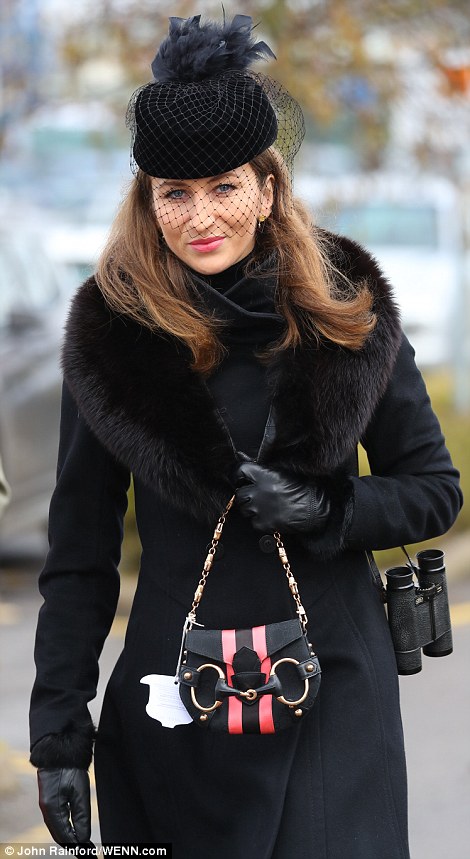 One woman stood out from the crowd in a hot pink coat worn over a floral dress. Another was the epitome of elegance in a black fur-trimmed coat and teamed with a veiled hat

This year is set to be a sedate affair at the iconic racecourse after bosses introduced a restriction on purchasing alcohol in 2017.

Following drunken scenes in 2016, when well-heeled festival-goers saw footballers urinating into glasses and women flashing their breasts, the Jockey Club decided that enough was enough.

Those hoping to buy a round of several pints will be limited to just four at a time. The cap will apply to all alcoholic drinks, including wine, beer and spirits.

Every bar will have a water point, and the closing times for complimentary bars in hospitality will be brought forward. 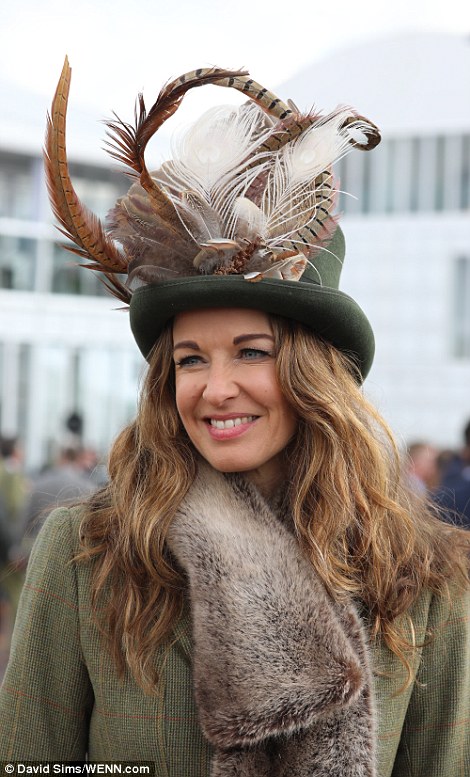 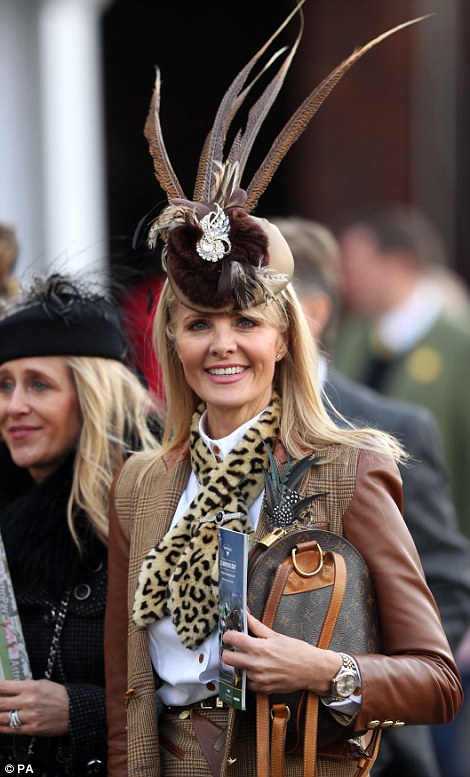 Feathered friends! A woman looked striking in an elaborately decorated hat (left). Another added interest to her outfit with a leopard print snood and a dramatic headpiece

A woman in navy braved the walk through the racecourse in spiky heels (left). It’s not all about country casuals, as this woman in leopard print proved (right) 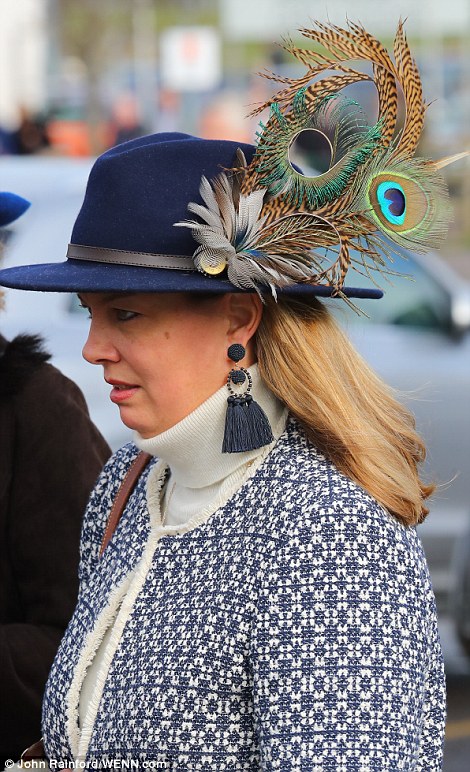 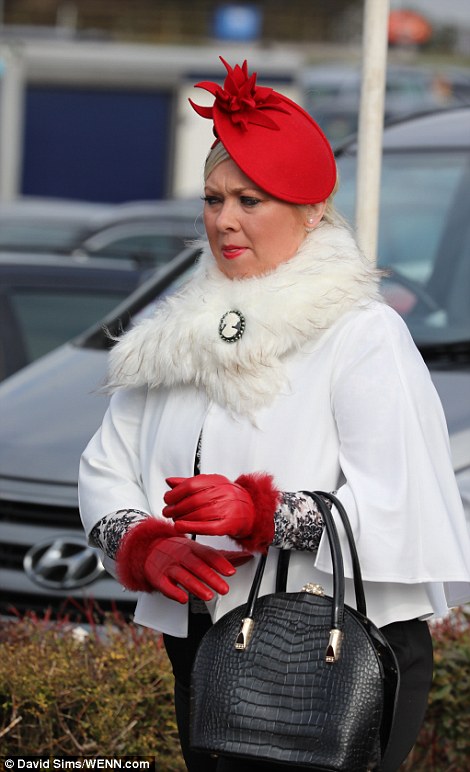 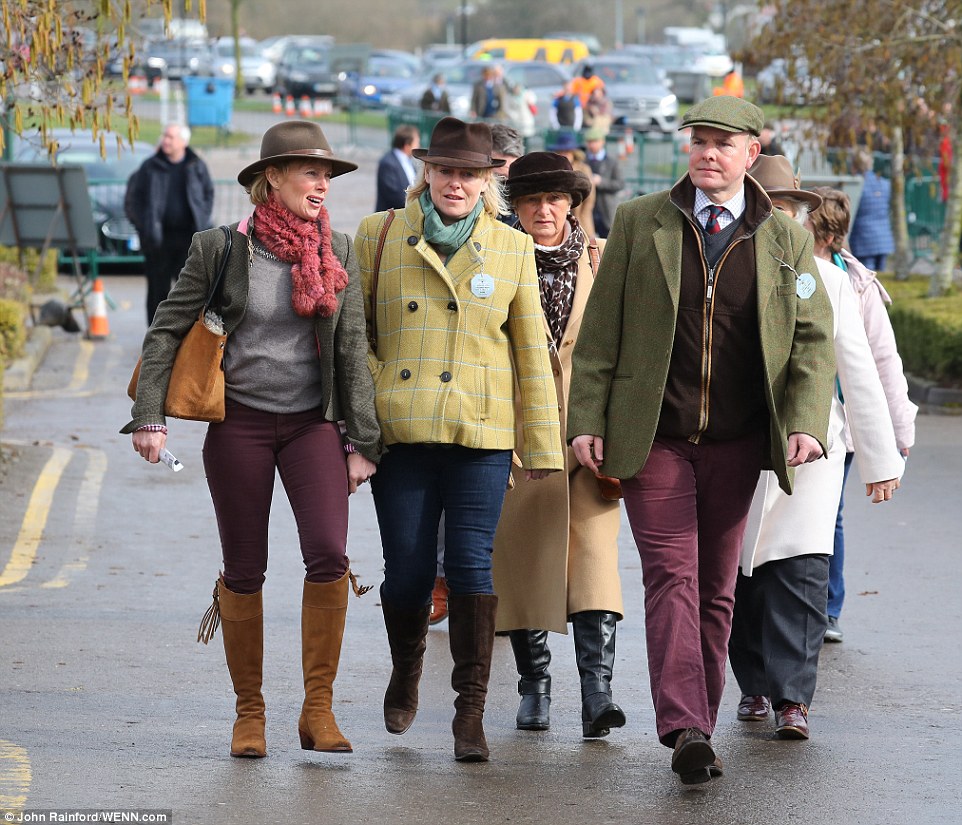 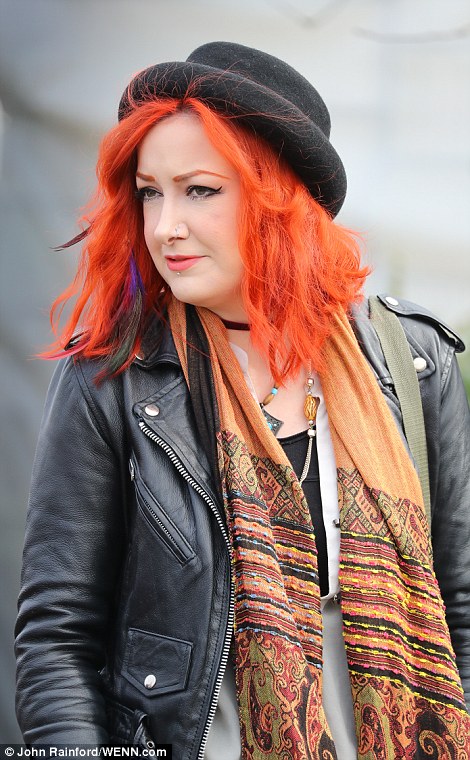 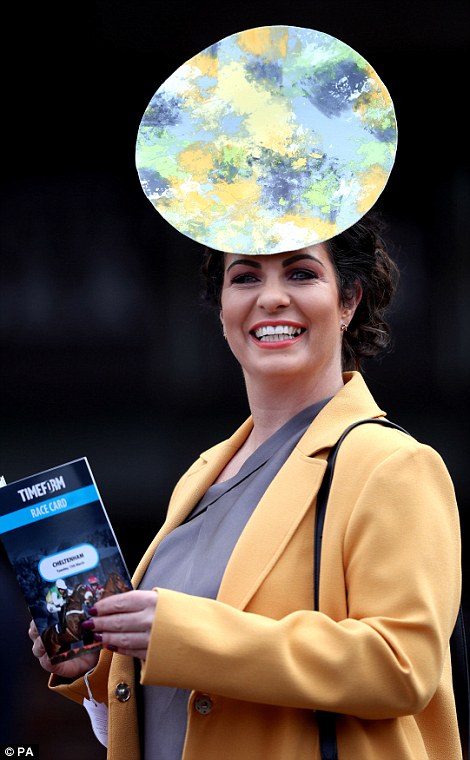 Some revellers decided to give just a subtle nod to racing fashion with an understated hat. But others went all out with eye-catching millinery 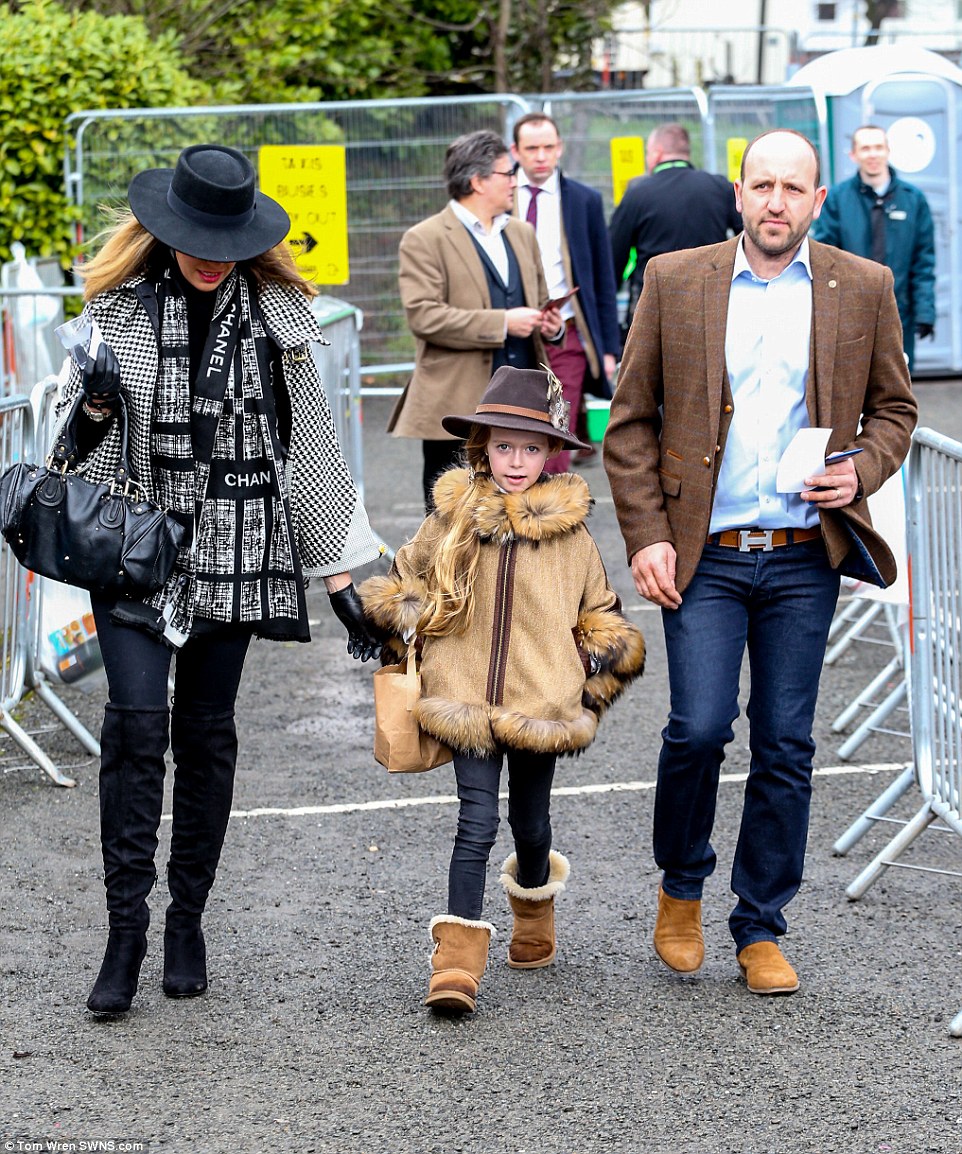 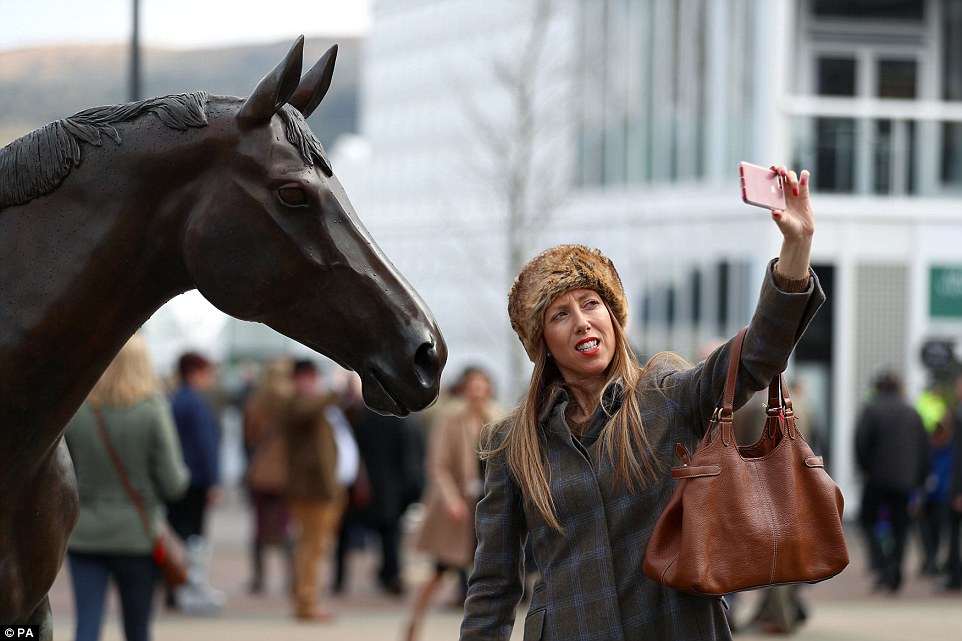 Country casual staples such as tweed, tartan and sensible boots were out in force, with many opting for earthy tones of brown and green 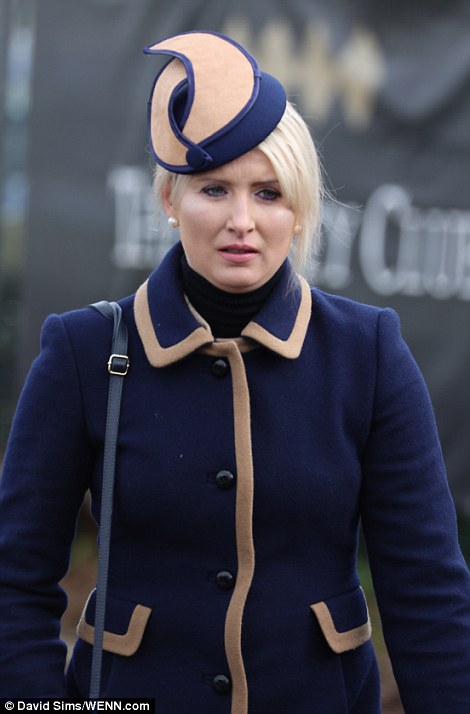 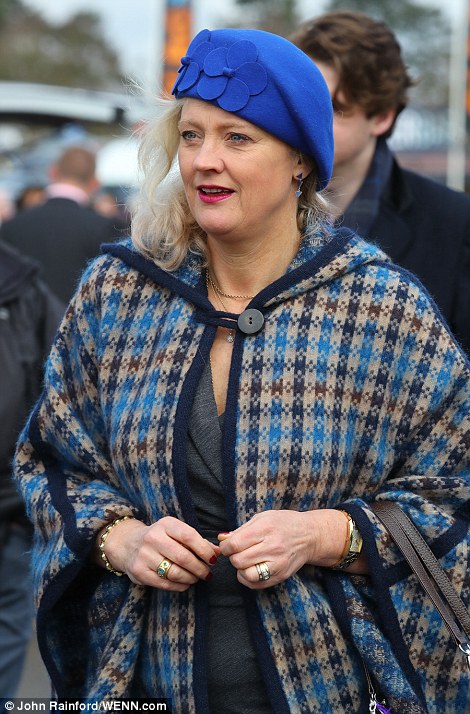 True blue! ONe woman looked impeccably co-ordinated in a creamy and navy hat that matched her coat exactly. Another was also looking elegant in shades of azure 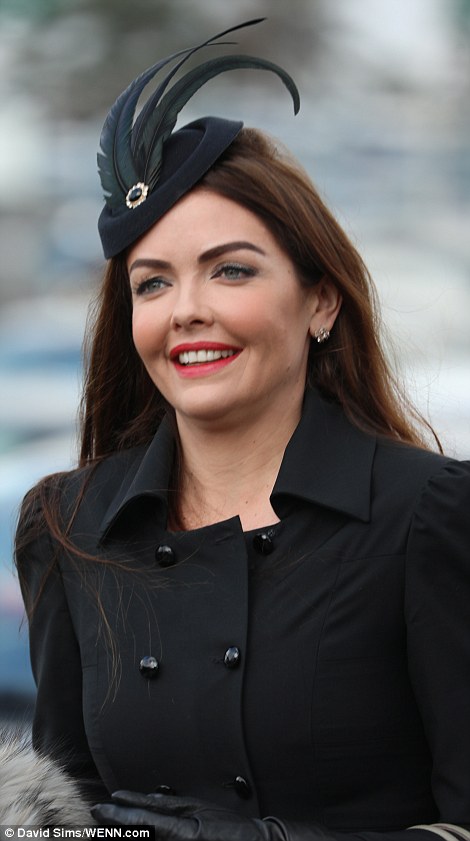 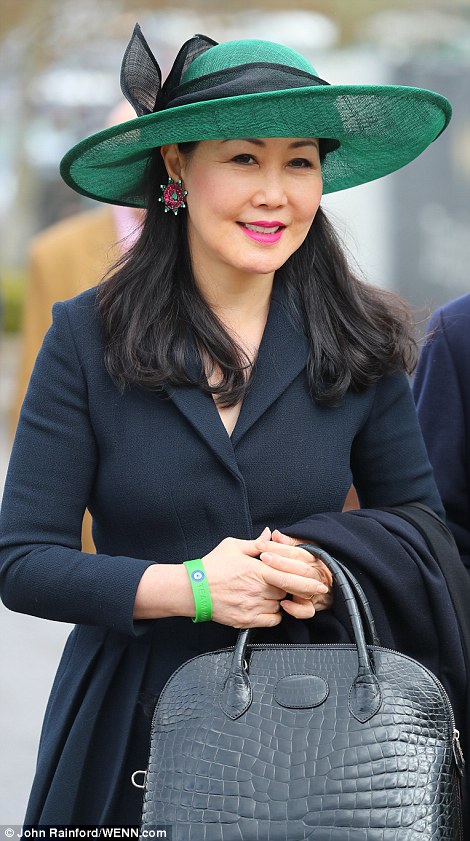 A woman looked elegant in a chic black coat teamed with an elegant feathered fascinator.

A racing fan was co-ordinated from head-to-toe in earthy shades. Another added a splash of colour to her muted ensemble with a pink skull patterned McQueen scarf 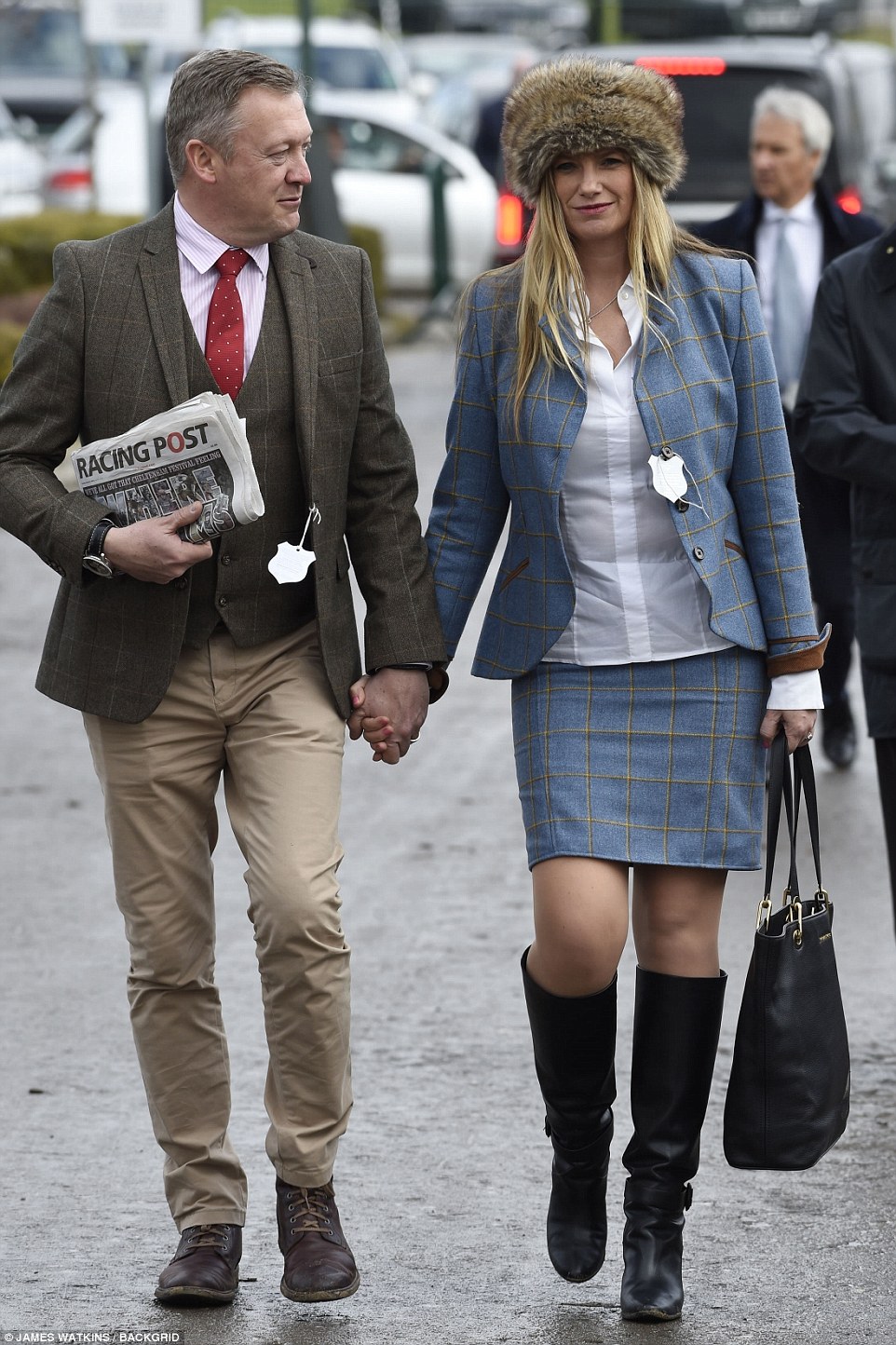 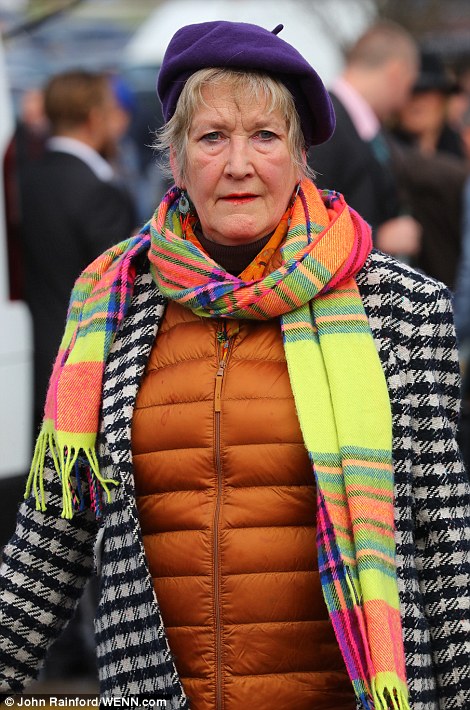 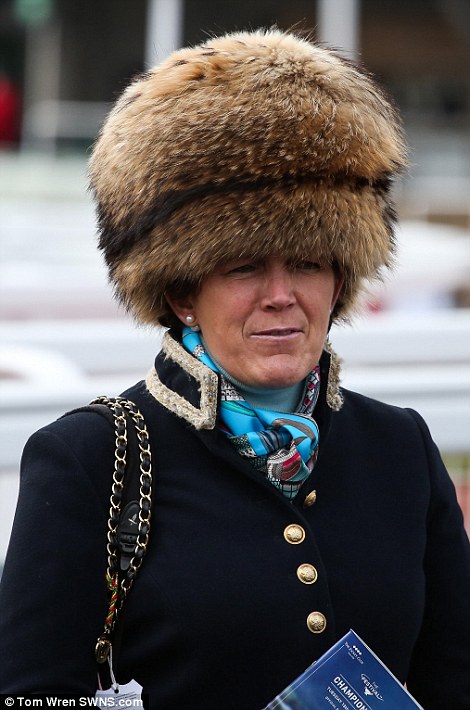 While many people opted for muted greens and browns, this woman put on a much more colourful display in an orange body warmer, multicoloured scarf and purple beret. Another racegoer kept the cold at bay with a very cosy fur hat