Hormone-disrupting chemicals, known as parabens, are significantly associated with an increased number of abnormally sized and shaped sperm, which has previously been linked to infertility.

Parabens, which are also found in certain foods, drugs and cosmetics, also cause DNA damage in sperm, which may further hinder a woman’s ability to conceive, the study found.

Exposure to such chemicals also reduces sperms’ mobility, making it more difficult for ejaculate to reach an egg, the research adds.

Study author Joanna Jurewicz from the Nofer Institute of Occupational Medicine in Lodz, said: ‘To avoid parabens is very difficult because they are widespread, but we can try to minimize the exposure by only using personal care products with label information saying that there are no parabens in the particular product.’

CHEMICAL FOUND IN PLASTIC CONTAINERS, BANKNOTES AND RECEIPTS MAY CAUSE BREAST CANCER

A chemical found in countless everyday products ranging from plastic food containers to banknotes and receipts may increase the risk of breast cancer, research revealed in April.

The hormone-disrupting chemical, known as Bisphenol S (BPS), alters a gene linked to the disease, a study found.

Researchers from Oakland University in Michigan warn BPS mimics estrogen and may have the same hormonal effects as the so-called gender-bending chemical Bisphenol A (BPA), which has previously been linked to breast growth in men.

As a new area of research, it’s unclear how much BPS exposure is required to raise an individual’s breast cancer risk.

Yet, experts are warning any plastic exposure may carry breast cancer concerns.

How the study was carried out

The researchers analysed the urine samples of 315 men who attended a fertility clinic.

The samples’ paraben concentrations were assessed.

The study’s participants were also interviewed and provided semen, saliva and blood samples.

Parabens cause slow-moving sperm of an abnormal size

Results reveal the presence of parabens in urine are significantly associated with an increase number of sperm of an abnormal size and shape, which has previously been linked to infertility.

Parabens are also linked to DNA damage in sperm, as well as reduced mobility, which may mean they are unable to travel the distance required to fertilise the egg.

A particular type of the chemical, known as butyl paraben, was found to be particularly associated with reducing sperm quality.

Parabens are widely-used preservatives in cosmetic products, including soaps, moisturisers and make-up.

Aside from cosmetics, they are also found in certain drugs, pesticides, plastics, detergents, foods, toys and flame retardants

The most common forms of the chemical are methylparaben, propylparaben and butylparaben. Parabens are sometimes combined to increase their effectiveness.

Some are banned from cosmetics in the EU, but are permitted by the FDA.

According to the US National Institutes of Health, parabens may have developmental, reproductive, neurological and immune-system side effects. 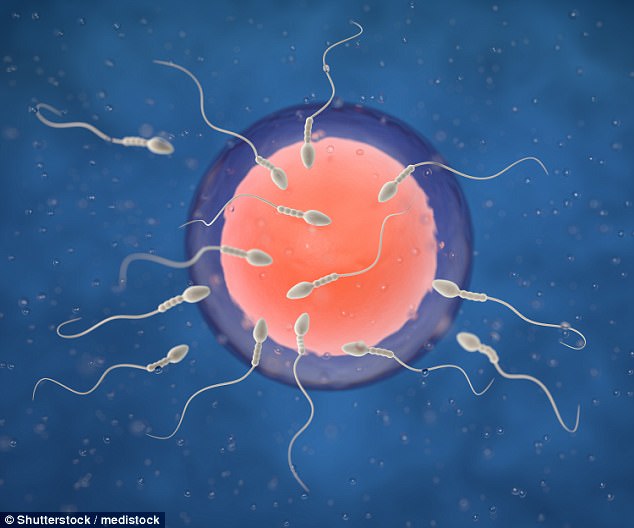 Paraben exposure reduces sperms’ mobility, making it more difficult for it to reach an egg

‘To avoid parabens is very difficult because they are widespread’

Marisa Bartolomei, co-director of the epigenetics program at the University of Pennsylvania Perelman School of Medicine, who was not involved in the study, said: ‘Parabens are in many products: sunscreens, body lotions, facial lotions and cleansers, mascara, assorted lipsticks, hand soaps, shampoos, conditioners, sprays, gels, and some food products

Ms Jurewicz said: ‘To avoid parabens is very difficult because they are widespread, but we can try to minimize the exposure by only using personal care products with label information saying that there are no parabens in the particular product