An Australian chemist has left locals outraged and been accused of price gouging as a toilet paper shortage grips the country.

The chemist in the inner Sydney suburb of Potts Point has been slammed by locals on Facebook after photos were posted on a community group.

‘Given I haven’t seen a roll anywhere in almost two weeks, I went in,’ a woman wrote alongside an image of packets of 18 Kleenex toilet rolls on Saturday.

‘These a**holes are profiteering by charging $20 a pack. Priceless.’

‘This is outrageous – let’s all remember this once this passes, I will never spend another dollar at a business like that,’ one person replied.

‘Greedy! Shows how much they care about the community. It won’t be forgotten!’ wrote another.

A spokesperson for the chemist told Yahoo News it sells single rolls for 99 cents, but did not comment on the fact they were selling packs of $18 for $20.

‘We don’t usually stock toilet paper but in response to the higher need for toilet paper we have been able to purchase single rolls from our supplier for a higher cost,’ a Priceless Compounding Chemist spokesperson told Yahoo.

‘A lot of elderly people and larger families haven’t been able to buy toilet rolls at supermarkets and most wholesalers are out, so we are doing what we can so the community is able to access it.’ 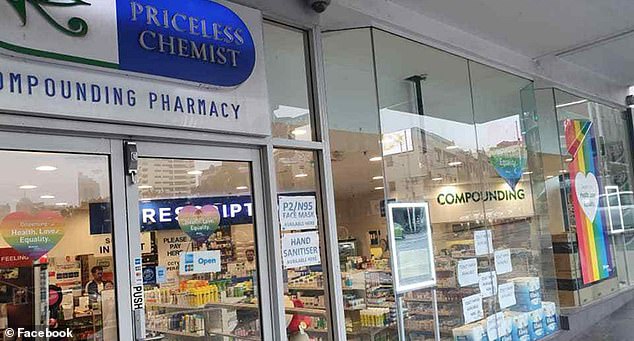