Chester FC supporters were left stunned after a meeting on Zoom had to be cut short when ‘invaders’ hijacked the call with pornographic videos.

More than 170 fans of the National League North side had gathered on the video conference to discuss club matters and the season so far amid ongoing uncertainty during the Covid-19 pandemic, but matters descended into chaos as the X-rated footage was aired in the frame of an attendee called ‘Lynn Davis’.

Some of the other Chester fans in attendance also couldn’t help but laughing, although many were clearly unimpressed and stern-faced.

Adam Langan, the Labour Councillor for Newton and Hoole and a club director, put his head in his hands seemingly in despair.

It has led to comparisons with the Handforth Parish Council video that went viral after a heated row between members – and Johnson insisted the popular clip ‘has nothing’ on the debacle that unfolded with Chester.

He wrote in a tweet: ‘Let me tell you something, the Handforth parish zoom meeting has absolutely nothing and I mean NOTHING on what I’ve just witnessed on the Chester FC zoom. Unbelievable.’ 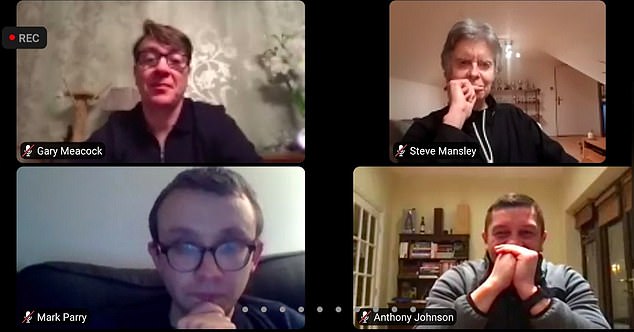 Chester’s official Twitter account also chipped in with a reference to the Handforth meeting, adding the meeting had been disturbed by an ‘outside’ interference.

‘Yes, unfortunately tonight’s zoom meeting has been cut short due to – ahem – outside interference,’ a club tweet read.

‘Read the standing orders and put them away, Lynn.’

The supporters’ group that had organised the call, City Fans United, had made the Zoom meeting open to any member of the public and advertised it on their website beforehand.

The group insisted that ‘usual etiquette on the Zoom meeting applies’.

Unfortunately they were left with no choice, however, but to cancel the meeting early and later apologised for the ‘offensive’ videos that were played, insisting it was ‘completely out of our hands’. 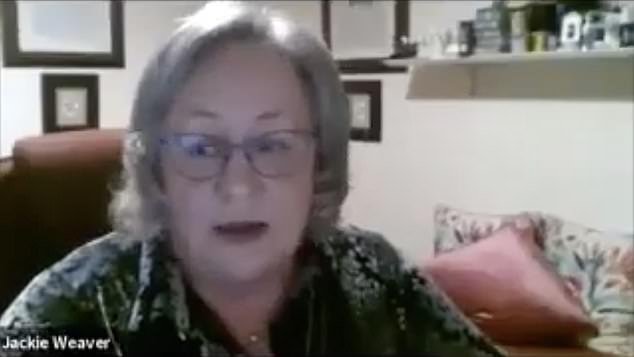 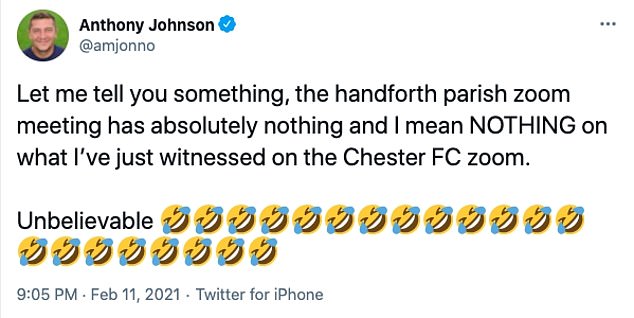 ‘Due to the offensive material that appeared during our Zoom meeting this evening, we were forced to bring our meeting to a close earlier than anticipated,’ the group said in a statement.

‘Apologies to anyone that was offended by the material that suddenly appeared on the meeting, and we removed it as quickly as possible, but unfortunately repeated attempts meant we had no alternative but to close the meeting.

‘We were at the point where Anthony Johnson was about to do a Q&A, so we will put a separate article together to provide you with the answers that he was going to give to your questions, in the very near future.

‘Again, apologies for the events that were completely out of our hands this evening.’

Chester chairman Andrew Morrison said the incident was ‘entirely unsuitable’ and promised the interview with Johnson would be available for fans later on – joking that the club could receive a ‘surge on members’.

‘It’s always great to have so many people on a Zoom call,’ he told Chester Live.

‘Sadly there were some people who obviously joined with a different agenda than talking about the challenges of non-league football! 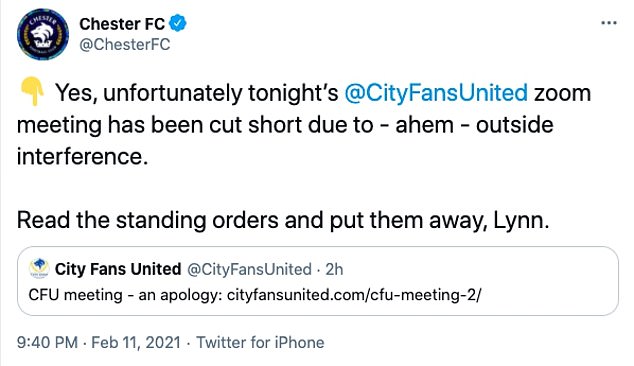 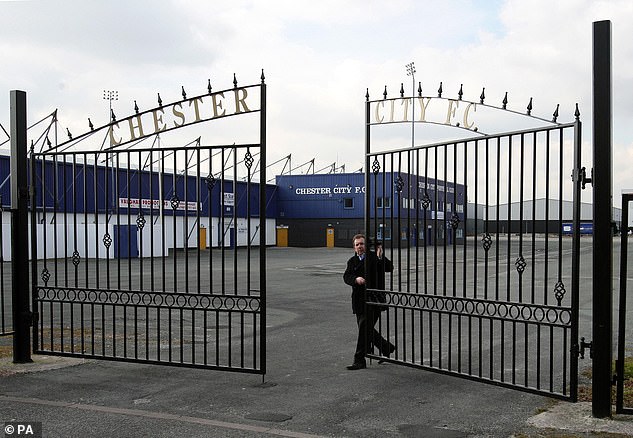 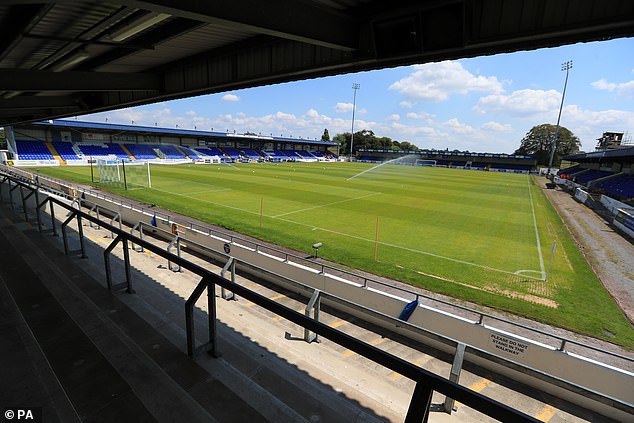 ‘It’s obviously entirely unsuitable with what we believe as a club but we don’t take ourselves too seriously. I’m sorry if anybody was offended about it. But what we missed out on the meeting, the interview with Jonno, will be shared out later.

‘It was a very serious meeting looking at how the club will move forward so at least it happened near the end. But it certainly made for a very interesting CFU membership. Hopefully we will get a surge on members from the meeting although I am not sure we will be accepting one of them!’

Chester, who are co-managed by both Johnson and Bernard Morley, were second in the National League North table before their season was suspended with the nation entering its third lockdown in January.