An accountant who had never played ice hockey professionally performed heroics when he came on as the Chicago Blackhawks emergency goalie after injuries to the regular starter and his backup.

Scott Foster took to the ice when Chicago lost Anton Forsberg and Collin Delia to injuries.

The 36-year-old former college goalie stopped all seven shots he faced over the final 14 minutes of the Blackhawks’ 6-2 victory over the playoff-bound Winnipeg Jets on Thursday.

‘Just a ton of fun’. Scott Foster in action for the Chicago Blackhawks against the Winipeg Jets 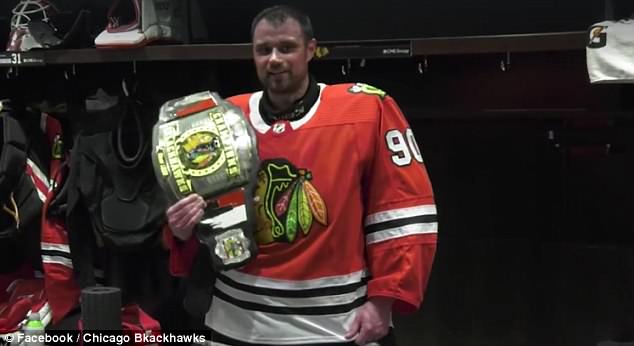 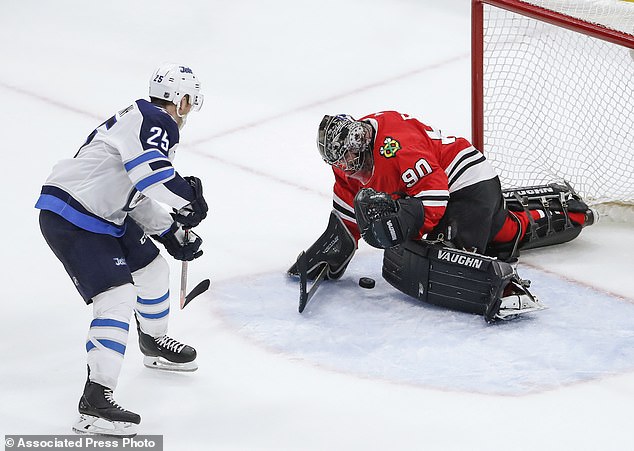 Foster saving a shot Winnipeg Jets center Paul Stastny. He was expecting a nice dinner at the game but found himself pressed into action

Foster is part of a crew of recreational goaltenders who staff Chicago’s home games in case of emergencies for either team.

That usually just means a nice dinner and a night in the press box watching the world’s best players compete at hockey’s highest level.

‘This is something that no one can ever take away from me,’ Foster said. ‘It’s something that I can go home and tell my kids and they can tell their friends. Just a ton of fun.’

‘What a moment,’ Blackhawks coach Joel Quenneville said with a chuckle.

Forsberg was expected to start, but he got hurt during a ‘pregame ritual,’ according to Quenneville.

Delia, who was just recalled from the minors Wednesday, then stopped 25 of 27 shots in his NHL debut before he was helped off the ice with 14:01 left after he cramped up.

Enter Foster, a married father of two who lives in nearby Oak Park and plays in two rec leagues. 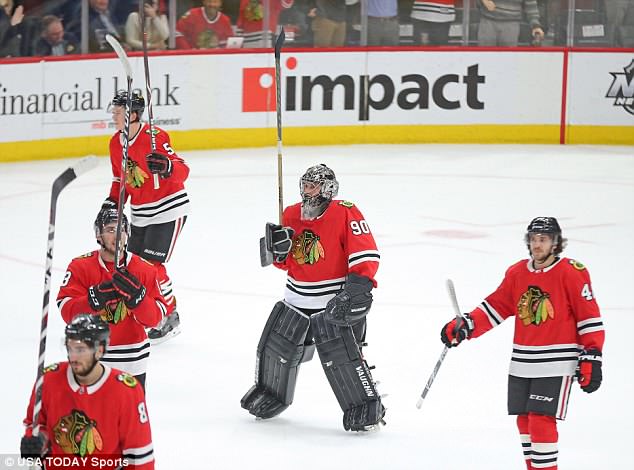 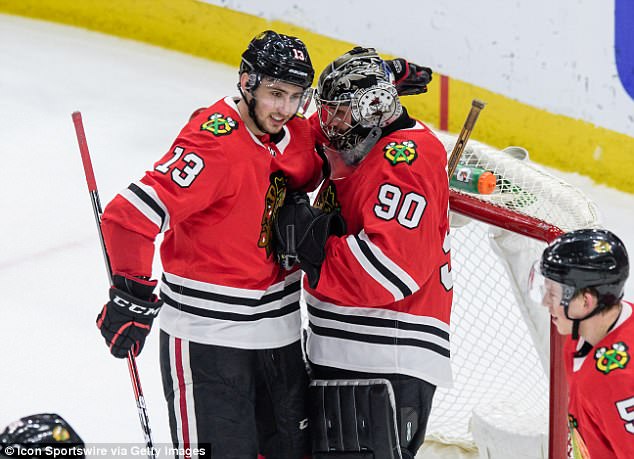 After a short warmup, the game resumed and Foster got a big cheer from the crowd of 21,839 when he denied Tyler Myers for his first save about a minute after he came in.

‘The initial shock happened when I had to dress. I think you just kind of black out after that,’ Foster said.

Backed by chants of ‘Foster! Foster!’ and more loud ovations, he made another stop on Myers and turned away Paul Stastny and Dustin Byfuglien in the final minutes. When it was over, the Blackhawks poured onto the ice and mobbed Foster in the net.

‘He was great,’ defenseman Brent Seabrook said. ‘I think the boys were doing whatever they could to help him out. He made some big saves. Fun night.’

The Jets had won six in a row and were trying to clinch home-ice advantage for the first round of the playoffs. But even they were moved by what happened.

‘It’s tough for anybody to come in 50 minutes into a hockey game, let alone a guy who hasn’t played in the (NHL),’ coach Paul Maurice said. ‘A great moment for him.’ 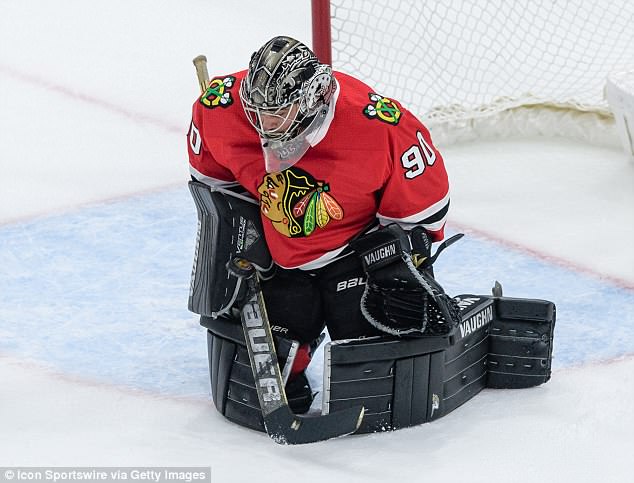 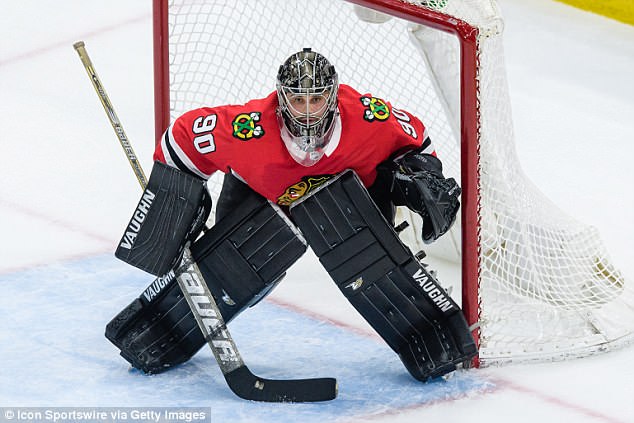 Carolina Hurricanes equipment manager Jorge Alves became the first emergency goalie to play in a game in the modern era last season. He closed out the final 7.6 seconds of a 3-1 loss to Tampa Bay.

The NHL adjusted its rules last summer to mandate that teams have an emergency goalie present for all home games ready to fill in for either team – setting the stage for Foster’s most competitive action since 20 minutes in relief with Western Michigan University in the 2005-06 season.

‘A few hours ago I was sitting on the computer typing on a 10-key, and now I’m standing in front of you guys having just finished 14 1/2 minutes of NHL hockey,’ he cracked.

It was a wild finish to one of Chicago’s best performances in a lousy season. 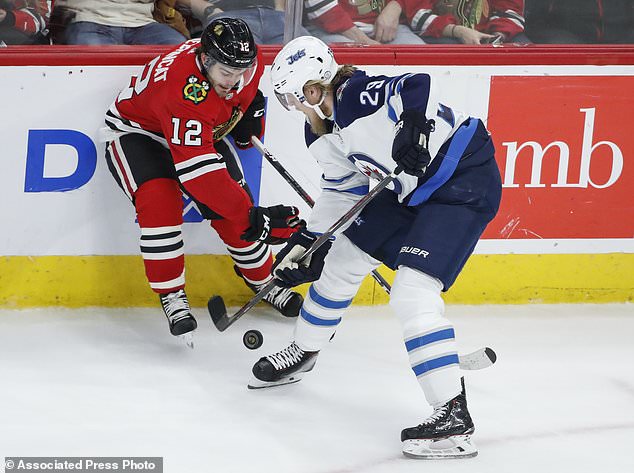 The 32-year-old Seabrook got the start alongside fellow alternate captain and frequent defensive partner Duncan Keith. He became the fifth player in franchise history to skate in 1,000 or more games for the team, joining Stan Mikita, Bobby Hull, Eric Nesterenko and Bob Murray.

Bryan Little scored his 200th NHL goal for Winnipeg in the opener of a four-game trip. Mark Scheifele also scored for the Jets, and Eric Comrie made 36 saves while subbing for starter Connor Hellebuyck.

‘It wasn’t a good night,’ Little said. ‘It wasn’t good from the start. It’s one of those games you want to forget and put behind you and look to the next one.’

Kane got Chicago off to a fast start when he shot it between Comrie’s legs for his 27th goal 3:44 into the first, and the Blackhawks just poured it on from there. Saad made it 2-0 with a nifty move to his backhand in front at 17:17.

Jurco added two goals in the second before Little got Winnipeg on the board with his 16th of the season at 14:24. But Gustafsson responded for the Blackhawks, scoring on a nice rush to the net at 17:27.