A mother-of-three who developed melanoma during each of her pregnancies said she would get an abortion if she was pregnant again.

For Lea Grover, 33, pregnancy meant bed rest, anemia, crippling pain, and a pre-term c-section due to complications, but most importantly: skin cancer.

So when she and her husband Mike, 35, thought she was pregnant again last year, abortion seemed like the most viable option to save her life.

She turned out not to be pregnant and though research has not shown a direct link to cancer and pregnancy, Lea felt the two were connected and underwent a procedure to remove her fallopian tubes earlier this fall to ensure she wouldn’t get pregnant in the hopes of preventing the disease from returning.

Now, the writer from Chicago has opened up about her ordeal in a blog post, insisting: ‘Although another baby would no doubt fit into our hearts and our lives and our family, the physical toll was too much.’

During Lea’s first pregnancy with her now eight-year-old twins, she developed melanoma, the most serious type of skin cancer.

She said she noticed a basal cell carcinoma or a cancerous mole on her body which she had removed. 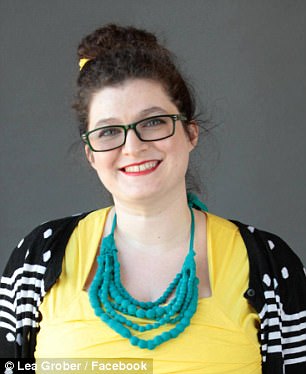 Lea Grover, 33, a writer from Chicago, wrote about her pregnancy scare on her blog Scary Mommy

But four years later when she noticed another mole on her body, she took that as a sign that she may be pregnant again.

A pregnancy test determined Lea was pregnant and soon after she was diagnosed with the same cancer.

During the pregnancy with her now five-year-old daughter, she had six cancerous or precancerous moles and several polyps from her colon removed.

Lea wrote in her blog Scary Mommy: ‘Those are the ones that scared me the most, because if I was pregnant, melanoma could be growing anywhere in my body — in my colon, in my lungs, in my brain.’

The thought of having another child struck fear int the couple that the cancer could return.

Lea said that another baby was ‘not a good thing.’

A medical condition left her unable to take birth control pills and an allergy to copper meaning she couldn’t use an IUD (intrauterine device).

She and her husband Mike tried to take precaution and he underwent a vasectomy that failed due to procedural complications.

Their decision to abort was also fueled by the fact that Mike had been living with glioblastoma, a malignant brain tumor, for several years.

She began delving into the science linking pregnancy and cancer.

Cancer during pregnancy occurs in one in 1,000 women.

While a healthy immune system stops cancerous cells from forming, a pregnant immune system is more susceptible to infection, disease and cancer cells – a process that Lea describes as a body hijack.

Studies have not found that pregnancy increases the chance of cancer, but women who develop cancer during pregnancy may have a more difficulties with treatment.

When the cancer is caught early, a pregnant woman typically receives the same treatment as anyone else which involves local anesthesia to remove the melanoma.

However, if the melanoma has grown deep and the cancer has spread, testing becomes more difficult in pregnant women, according to American Academy of Dermatology Association.

Treatment options for advanced melanoma, such as radiation, become limited to just the head and neck because it can cause birth defects if done on the pelvic area.

For other cancers, including breast, chemotherapy may be required. But chemotherapy during gestation can induce harmful effects to the fetus, newborn and mother.

A child born after receiving chemotherapy can experience malformations, organ toxicity and brain damage and mother can experience a spontaneous abortion and sterility. 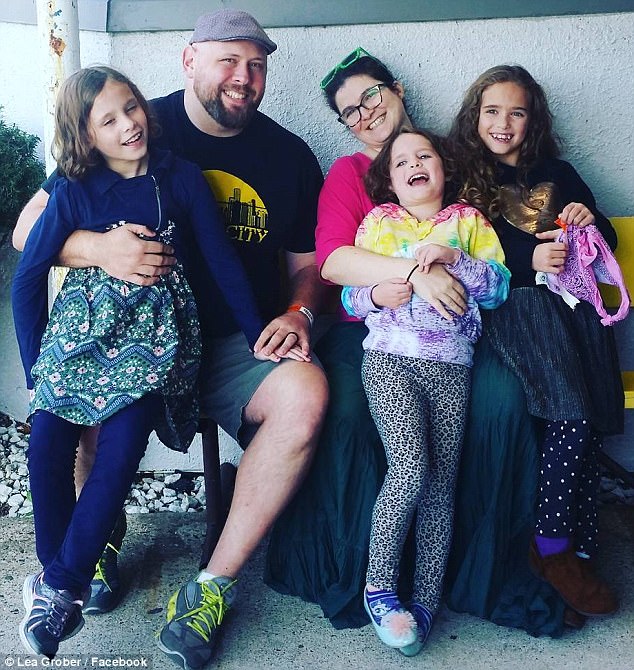 Lea and her husband Mike, 35, are both cancer survivors and said she would get an abortion because the physical toll of a pregnancy was too much

After two pregnancies with cancer, the couple dreaded another would trigger its return.

Lea’s biggest fear during the pregnancy scare was leaving her daughters without a mother and her husband, also a cancer survivor, as a single father.

So they decided that if the test came back positive, Lea would have an abortion to save her life and the life of her family.

They were relieved to learn that she wasn’t pregnant and that the risk of cancer had seized to increase.

Lea said she shared her story because of the misconceptions about abortion and to show that pregnancy is not always a good thing.

The mother adds that the surgery to remove her Fallopian tubes was her best bet at assuring the cancer or pregnancy complications she experienced would return.

She has received some backlash over her decision to consider abortion to which she said, ‘I have a thick skin.’

What is melanoma and how can you prevent it?

Removal of the melanoma: