‘She started looking pretty butch’: Chicken owner is left baffled after her hen ‘changes gender and transitions into a rooster’

A baffled chicken owner is convinced her hen has changed gender and transitioned into a rooster.

Pam Hamil, from Fannie Bay, began to notice a change in attitude and appearance of her pet, named Chook.

‘For five years she’s been a regular brown hen laying eggs in my backyard and then suddenly three months ago she transformed into a crowing male rooster,’ Mrs Hamil told NT News.

‘I noticed one day she started looking pretty butch — she grew red rooster combs on the top of her head, wattles under the beak, thick legs and long tail feathers.’

She decided to exhibit the transgender chicken in the poultry section of the Royal Darwin Show over Thursday, Friday and Saturday last week.

Mrs Hamil, who has been involved in the show for 25 years, thought the ‘freak of nature’ would be of public interest as Chook doesn’t look like a hen but also doesn’t meet the criteria of a rooster.

She claims that a damaged ovary unable to produce normal levels of oestrogen can explain the gender reversal.

The hen could have also been influenced by flock dynamics where it decided to take the role of the rooster to lead the flock of hens.

‘I spoke to the lady who runs the poultry section at the show and apparently it does happen more often now,’ Mrs Hamil said.

Mrs Hamil says she is often attracted to weird and wonderful animals as she found a green tree frog which had been born with three legs at the show last year.

She kept the frog and named it Prince Ching because it’s missing the ‘arm’ of Prince Charming. 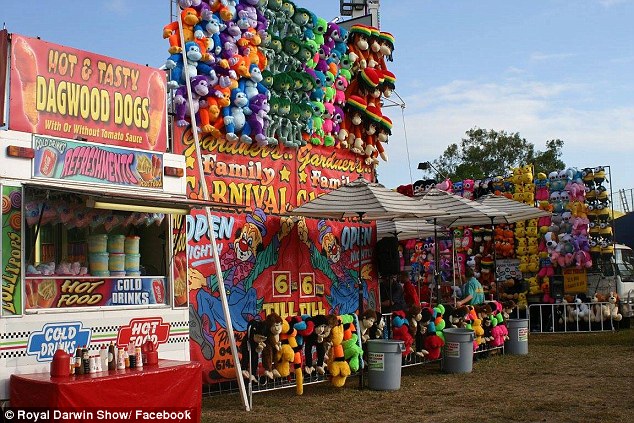 The transgender chicken called Chook was on display at the Royal Darwin Show (pictured), NT, on Thursday, Friday and Saturday last week