A child model fronted campaigns for Clarks and Monsoon just months before being diagnosed with a rare, aggressive form of cancer.

Daisy O’Leary Pye, 12, from Lee, south-east London, was diagnosed with Hodgkin’s lymphoma, a type of cancer that develops in the lymphatic system, shortly after shooting billboard and television ads representing the famous brands.

While modelling, the schoolgirl unknowingly suffered with a 16cm, grapefruit-sized tumour in her chest that was pressing on her lungs and heart, and hindering her breathing.

After enduring gruelling chemotherapy that saw her lose two stone and all her hair, the youngster is finally in remission but must still undergo further treatment to prevent the cancer returning.

Daisy’s mother Jules Pye, who works at a production company, said: ‘It was the news we were waiting for. She is truly courageous and I will be with her all the way.’

Child model Daisy O’Leary Pye fronted national campaigns just months before being diagnosed with a rare, aggressive form of cancer (pictured in an advertisement for Monsoon) 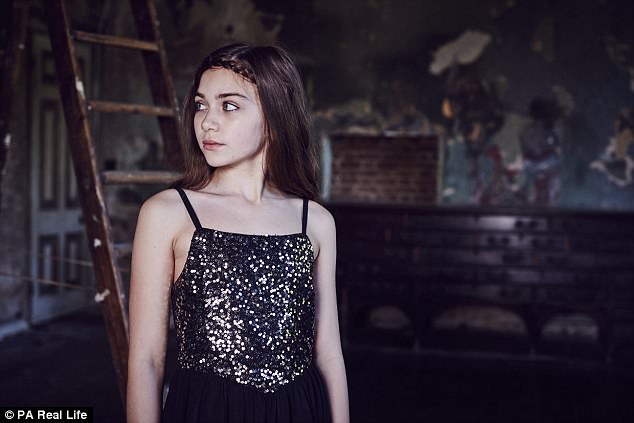 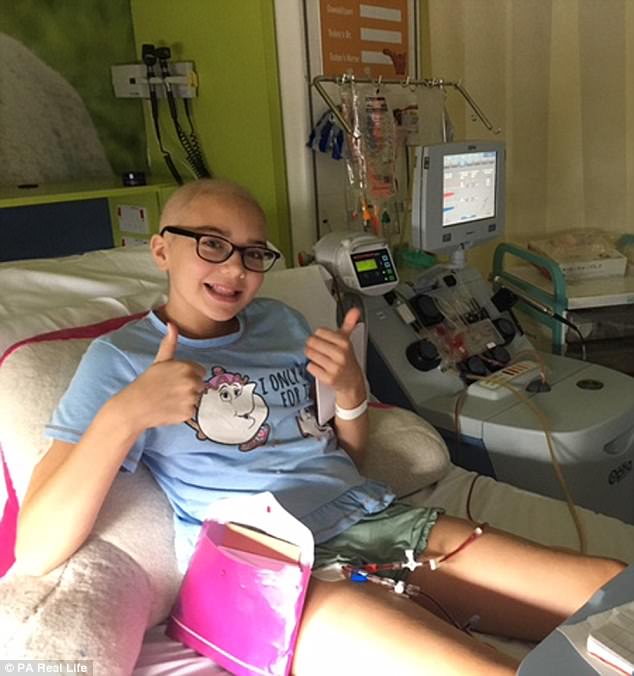 It has been linked to people with a lowered immunity, a family history of the condition, smokers and those who are overweight.

‘She has been so, so brave’

Ms Pye said: ‘After a year-long battle this is the news we’ve been waiting for.

‘The hardest thing for her was losing her hair, but she has been so, so brave. I’m very proud of her.’

Ms Pye first became aware her daughter was ill when they returned from a summer holiday in Ibiza.

She said: ‘We’d been on holiday in August 2016 and by September that year, her condition had deteriorated.

‘She was always so active and loved dancing, but I didn’t know that she’d been sitting out of the warm ups to her class.

‘She then started complaining about something pressing in her throat. She had trouble lying flat at night and couldn’t stop coughing when she lay down. ‘

Ms Pye and Daisy’s father Jimmy O’Leary, 53, who are separated, repeatedly took her to the GP before a diagnosis was eventually made.

Ms Pye said: ‘By the time the diagnosis came in November she’d lost two stone and was having severe night sweats.’

At 5ft 3in and with her size 4-6 clothes hanging off her, the previously active child looked gaunt and sick.

After having an X-ray at Lewisham Hospital, a mass was detected in Daisy’s chest and, in November last year, she was immediately referred to Evelina Children’s Hospital in central London.

After further scans and blood tests, Daisy’s family were told she had cancer.

Ms Pye said: ‘It was the worst news. We were told Daisy had cancer, but not what type, so we were sent to St George’s Hospital in Tooting, south-west London, to find that out.

‘There, she had a biopsy, a bone marrow test and a lumber puncture, where a needle is inserted into the spinal canal. It was horrible for her.’

Diagnosed with Hodgkin Lymphoma, a catheter was inserted into a vein in her left arm.

She was then referred to the Royal Marsden Hospital’s children’s day care centre in Surrey, to begin a four-month course of chemotherapy.

Yet, two months in, a scan revealed the cancer had spread to her neck, requiring her to have rounds of radiotherapy, in addition to the chemo.

Ms Pye said: ‘It was so tough on her. The steroids made her body swell and her hair fell out. But she attended school when she could and was so brave.’ 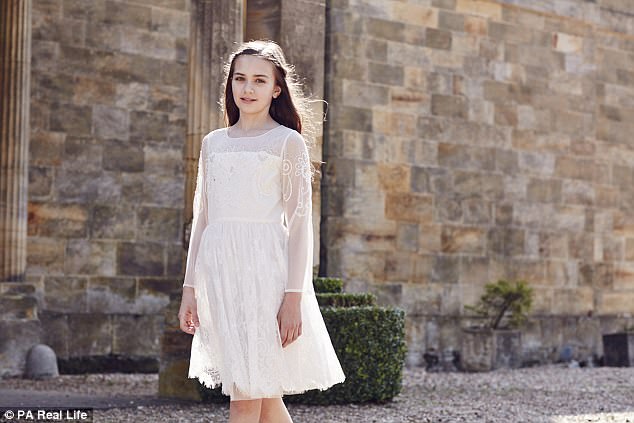 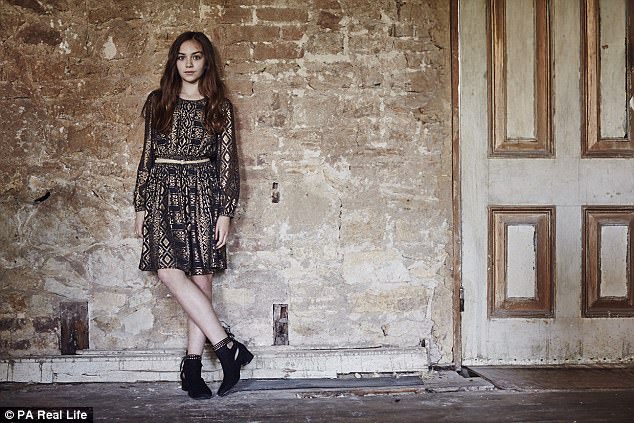 Although in remission, Daisy must still have further chemo and her stem cells replaced 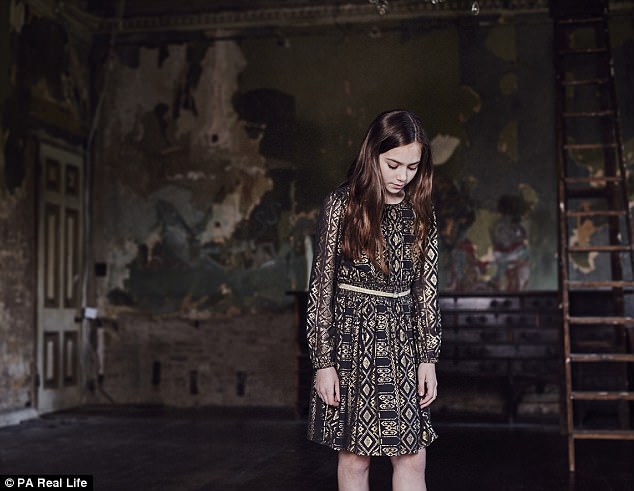 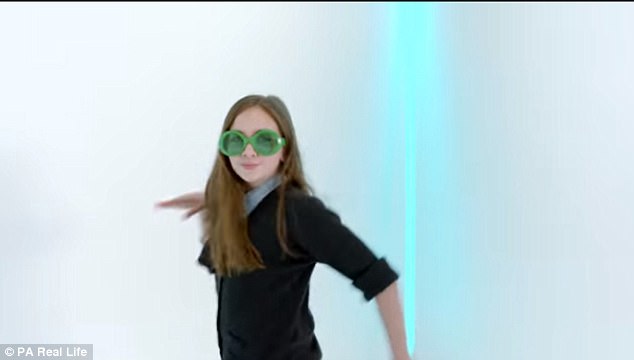 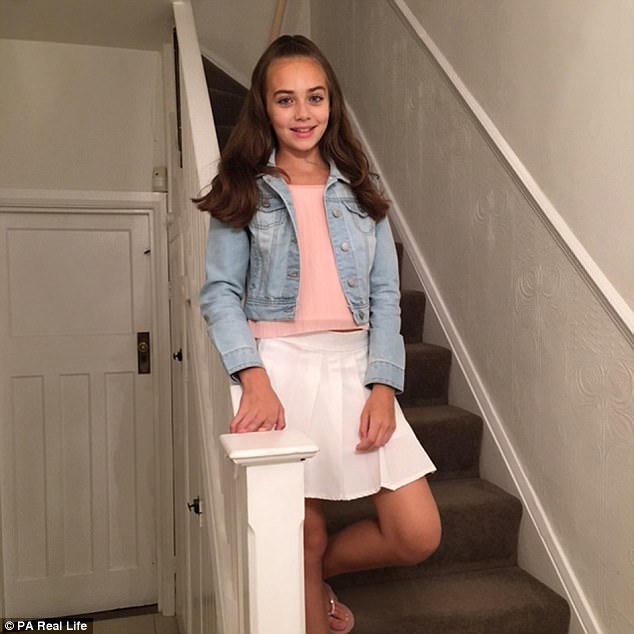 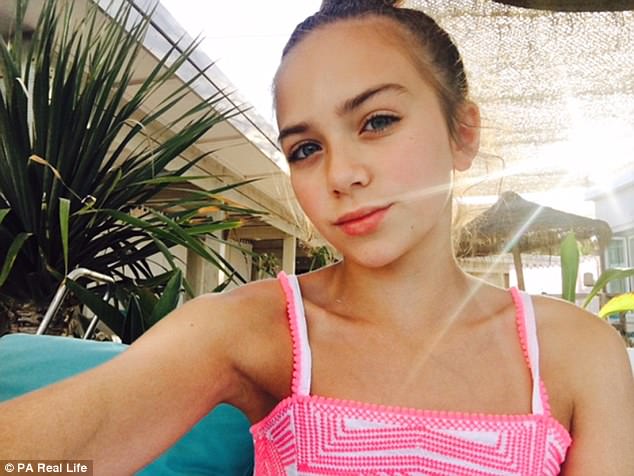 Once diagnosed, scans revealed the cancer had spread to her neck and needed treatment

‘She is truly courageous’

Between March and April 2017, Daisy finished chemo and started radiotherapy.

Yet, in August this year, a scan showed there was still cancer in her chest.

Ms Pye said: ‘She had a five-hour biopsy on her chest at the Royal Brompton Hospital.

‘This proved the cancer was still there, so she was transferred to St George’s and inserted with a Hickman line.

‘She also started four months of adult chemotherapy and at the same time they also harvested her stem cells.’

Yet a routine scan last week revealed her treatment was working and she was in remission. Daisy must still finish her course of chemotherapy and have her stem cells replaced as a precaution to prevent the cancer returning.

Ms Pye said: ‘It was the news we were waiting for. She is truly courageous and I will be with her all the way.’

Daisy has made a film via her mother’s production company, Rushes Production, supporting the staff at London’s Royal Marsden cancer hospital. Watch the videohere. 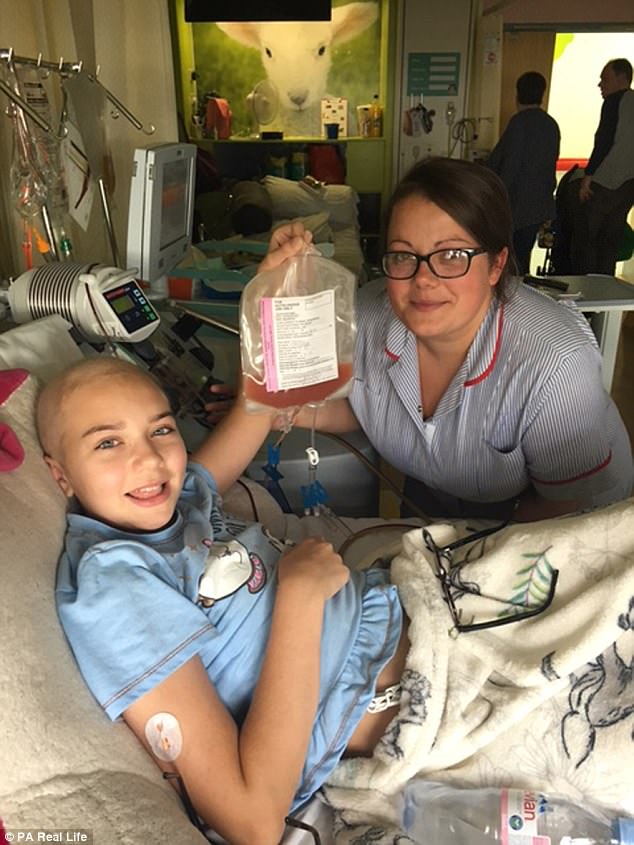 Despite having chemo and radiotherapy, a biopsy showed the cancer remained in her chest 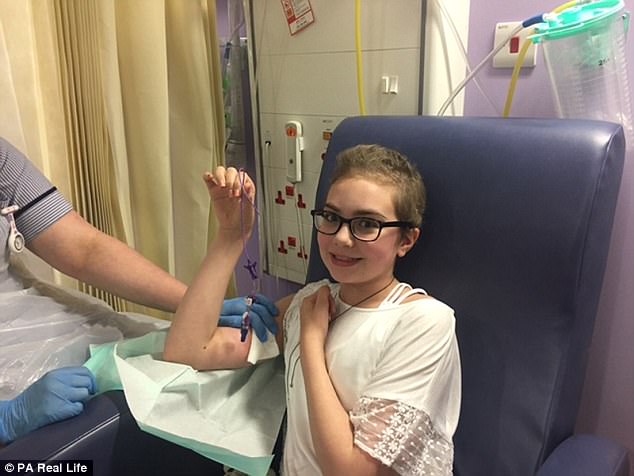 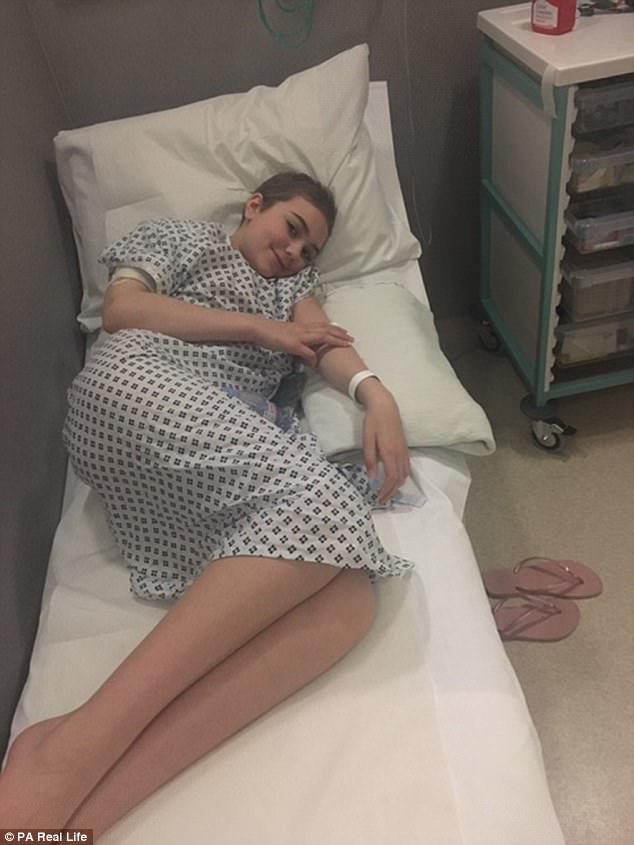 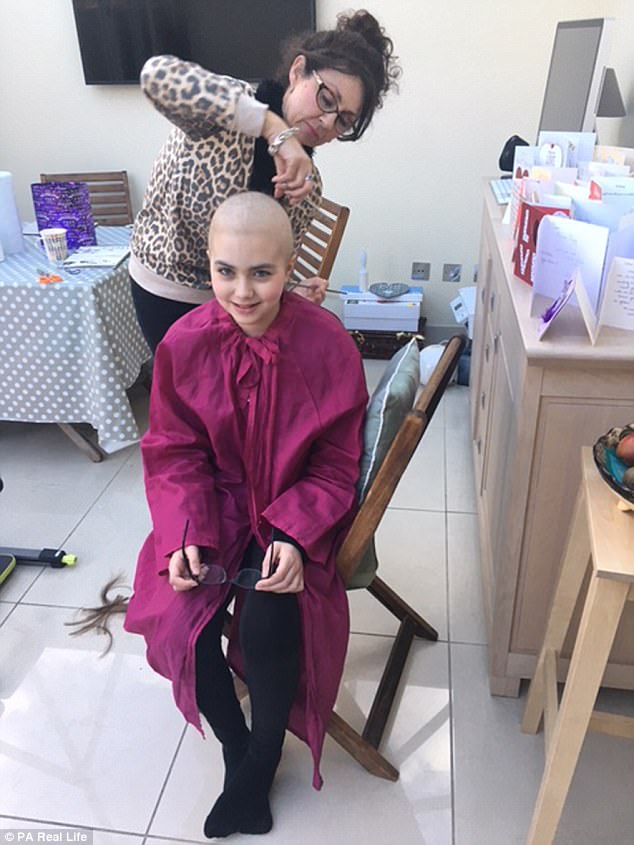 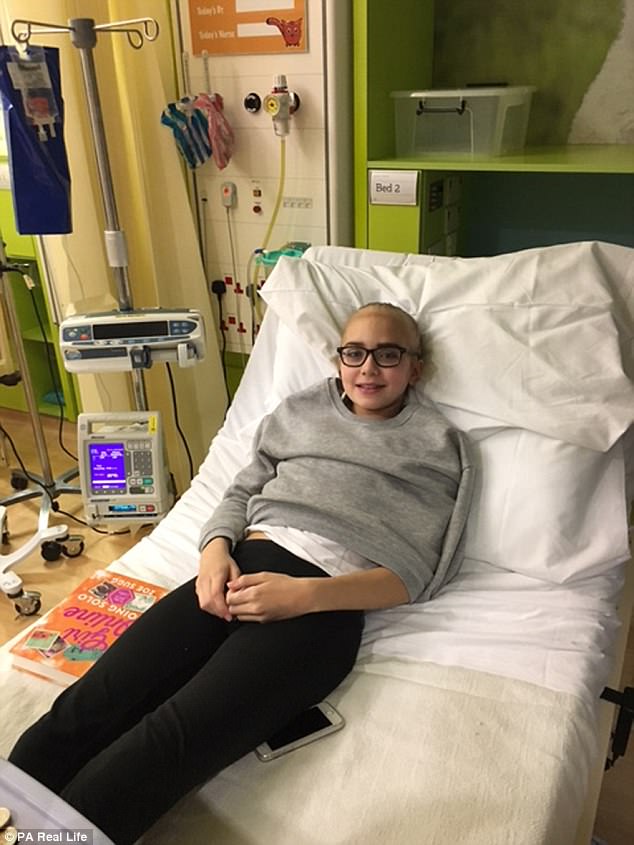