Your youngster’s babycino could be a death sentence according to child-safety experts who warn the marshmallow typically served with the drink is a choking hazard.

The warning over the popular children’s treat was issued by CPR Kids after a harrowing story from a mum whose 18-month-old almost choked during a coffee date.

The woman said she was at the cafe with her baby and mum when he started ‘silently choking’ after quickly plucking the whole marshmallow from his cup and shoving it into his mouth when she wasn’t looking. 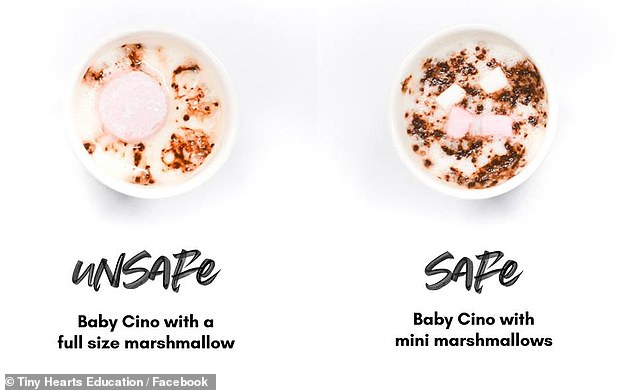 In the past, Tiny Hearts Education, another child-safety page on Facebook shared a side-by-side comparison showing an ‘unsafe’ babycino with a ‘full-size’ marshmallow and a ‘safe’ cup with ‘mini’ marshmallows

‘I saw out of the corner of my eye that he had turned red in the face,’ she said.

‘I quickly stood up giving him a strong back blow. The marshmallow dislodged out of his throat into his mouth and I was able to pull it out.’

The little boy was ‘distressed for a minute or two’ before asking for the marshmallow again.

But it took his mum a little longer to recover.

‘I was traumatised,’ she said.

The facts on choking and what to do revealed

Choking is what happens when something gets stuck in a person’s throat or windpipe, partially or totally blocking the flow of air to their lungs.

In adults, choking usually occurs when a piece of food enters the windpipe instead of the food pipe. Babies and young children can choke on anything smaller than a D-size battery.

Sometimes the windpipe is only partially blocked. If the person can still breathe, they will probably be able to push out the object by coughing forcefully. Be careful not to do anything that will push the blockage further into the windpipe, like banging on the person’s back while they are upright.

If the object cuts off the airway completely and the person cannot breathe, it’s now a medical emergency. The brain can only survive for a few minutes without oxygen.

The symptoms include clutching the throat, difficulty breathing and blue lips.

With children and adults over one year and choking, you should try to keep the person calm. Ask them to cough to remove the object and if this doesn’t work, call triple zero (000). Bend the person forward and give them up to 5 sharp blows on the back between the shoulder blades with the heel of one hand. After each blow, check if the blockage has been cleared.

If the blockage still hasn’t cleared after 5 blows, place one hand in the middle of the person’s back for support. Place the heel of the other hand on the lower half of the breastbone (in the central part of the chest). Press hard into the chest with a quick upward thrust, as if you’re trying to lift the person up. After each thrust, check if the blockage has been cleared. If the blockage has not cleared after 5 thrusts, continue alternating 5 back blows with 5 chest thrusts until medical help arrives.

The paediatric nurses from CPR Kids added that the mother involved in the incident usually tears up full-sized marshmallows for her baby.

But she hadn’t seen it arrive alongside the babycino when the waitress placed their order on the table.

The child-safety experts said full-sized marshmallows are a choking hazard for children under five.

‘Next time you order a babyccino, ask the cafe staff to leave the marshmallow out, tear it up into small pieces yourself, or pop it into your mouth before your little one notices,’ they recommended.

‘There are a lot of resources that talk about what age is too young to introduce foods such as marshmallows, whole nuts and popcorn – many state under five is not safe. It also varies between individual children and when parents feel comfortable.’ 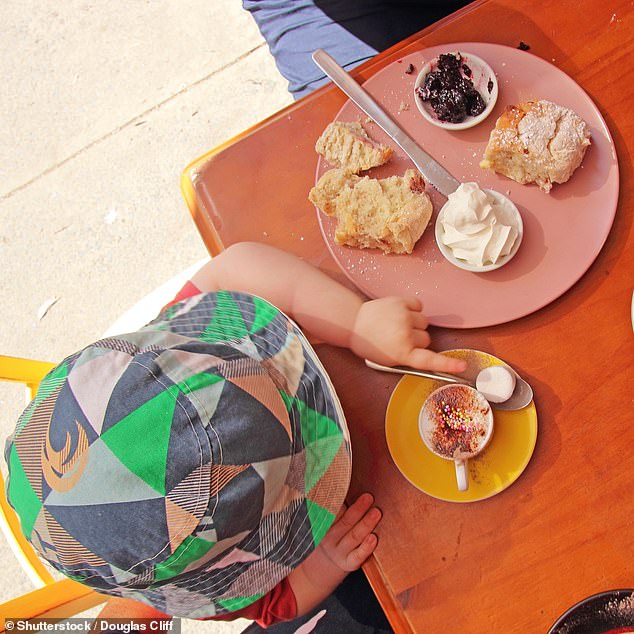 The message struck a chord with the CPR Kids community.

‘I wish more people knew about this. I always feel very uneasy seeing toddlers with huge marshmallows. The coating on the marshmallow and the sticky consistency it turns inside the mouth makes it harder to dislodge too if it does get stuck in the airway,’ one mum said.

Others said cafes should ‘be pro-active’ and only include mini marshmallows or take them off the babycino altogether.

‘A lot of cafe people and even friends don’t think sometimes and give kids things that aren’t really for little ones,’ one woman said.

1. All window coverings should be cordless or have cord cleats installed so they are out of reach of kids

2. Move cribs, beds, chairs and other furniture away from windows

3. Install a window guard in all second-storey rooms

4. Secure furniture and TVs to the walls

5. Cover all electrical outlets, even those you think are out of reach

6. Install safety gates at the top and bottom of all the stairs

7. Add safety latches to all drawers and doors

8. Put cleaning supplies, medications and other toxic items in a locked cabinet that’s out of reach

9. Use stove knob guards to make sure they’re temporarily inoperable