Children who are born at higher altitudes tend to be smaller than those born at lower altitudes, a new study suggests.

Researchers found kids who live in cities 5,000 feet or more above sea level were not only smaller at birth but also more likely to have stunted growth.

Impaired development persisted even when children were born into clean homes with ‘good health-service coverage and highly educated mothers.’

The team, from the International Food Policy Research Institute, says this is likely because, when they were in the womb, their mothers did not get adequate oxygen supply, which permanently affected their growth.

A new study from the International Food Policy Research Institute found children born in cities 5,000 feet or more above sea level were more likely to be smaller as infants and have stunted growth (above) 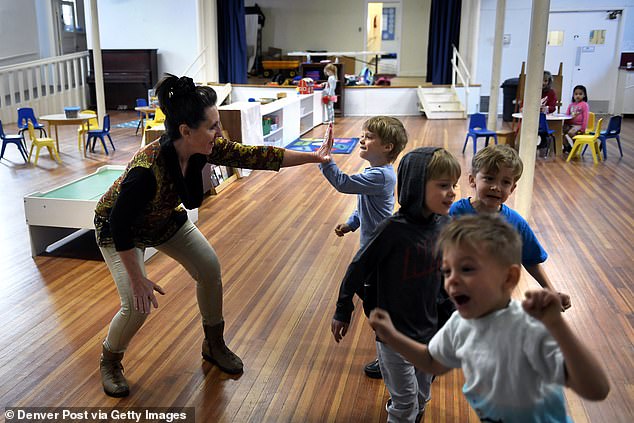 The highest risk was found right before and right after birth because pregnant women did not get adequate oxygen supply, affecting fetal development. Pictured:  Children play at Highlands United Methodist Church in Denver, Colorado, February 2019

‘More than 800 million people live at 1,500 meters above sea level or higher, with two-thirds of them in Sub-Saharan Africa, and Asia,’ said co-author Kate Hirvonen, a senior research fellow at IFPRI, in a statement.

‘These two regions host most of the world’s stunted children so it is important to understand the role that altitude plays in growth.’

However, there are dozens of cities in the US that sit at 5,000 feet above sea level or even more including Albuquerque, New Mexico; Cedar City, Utah; Cheyenne, Wyoming; Elko, Nevada; Prescott, Arizona; and South Lake Tahoe, California.

Colorado has the most with least 45 cities – including Aspen, Aurora, Colorado Springs, Denver and Steamboat Springs – at least 5,000 feet above sea level.

Santa Fe, New Mexico sits more than 7,000 feet above sea level and the city with the highest point of elevation is Alma, Colorado, at 10,361 feet.

For the study, published in JAMA Pediatrics, the team analyzed height-for-age data of more than 950,000 children from 59 countries.

Results showed that children living at 5,000 feet (1,500 meters) or more above sea level ‘were, on average, born at a shorter length’ than those living at lower altitudes.

After birth, these children also had a lower growth trajectory than their peers living in cities lower than 5,000 feet above sea level.

This held true even when children were living in ‘ideal home environments,’ which includes access to clean water, health care and sanitation.

“If children living at altitude are, on average, more stunted than their peers at sea level, then a more significant effort to address high altitude stunting is needed,’ Hirvonen said.

Several studies have found that stunted growth can cause children to fall sick more easily, to not perform as well as school and to suffer from chronic diseases in the future.

The study also found that the highest risk was during the perinatal period, which is the time leading up to, and immediately after, birth.

Researchers suggest this is because pregnant women had low oxygen levels in cities with higher altitude, affecting fetal development.

“Pregnancies at high-altitudes are characterized by chronic hypoxia, or an inadequate supply of oxygen, which is consistently associated with a higher risk of fetal growth restriction,’ Hirvonen said.

‘Restricted growth in the womb is in turn a leading risk factor for linear growth faltering” said Hirvonen.

The team is calling for more attention and guidance from healthcare professionals regarding pregnancies in high-altitude areas.