Children with older fathers may struggle to be parents

Older fathers are more likely to have children who are less fertile, a study of 1.4 million people has found.

Researchers found that children from older dads, on average, go on to have fewer children. The effect was not found in children with older mothers.

The researchers – led by a team at Georg August University in Gottingen, Germany – believe that as a father ages, more mutations occur in their sperm which affect the child’s fertility later.

Researchers found that children from older dads, on average, go on to have fewer children. The effect was not found in children with older mothers

While women are born with all the eggs they will ever have, male sperm production goes on throughout a man’s life.

But as the cells that create sperm divide, more errors gradually creep into the DNA.

While most of the errors have no effect, some may affect the ability to have children in the offspring.

On average, we have around 60 such mutations each which are not present in either our father or mother.

The researchers set out to test the theory that the father’s parental age was linked to reduced fertility and survival in children.

By looking at computerised family records in Sweden, Canada and Germany they were able to track the age of children’s fathers at the time of their birth.

They then looked to see if the children survived to reproduce themselves, and how many children, if any, they had.

Three of the populations were ‘pre-industrial’ – living between 1670-1850, in the research published in the journal proceedings of the Royal Society B. 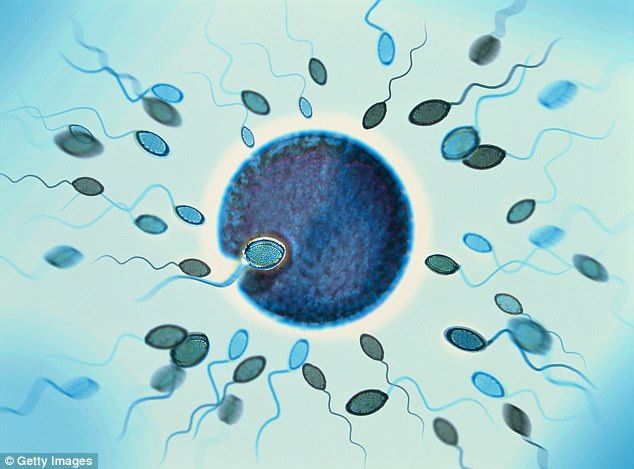 The researchers believe that as a father ages, more mutations occur in their sperm which affect the child’s fertility later

This was to make sure that the effects were not caused by some feature of the modern world, such as plastics or chemicals.

The fourth population was that of modern Swedes born after 1932.

This effect was only found to a ‘minuscule’ extent in the modern sample, the authors said.

The authors said their findings will ‘aid in predicting the effect increasingly older parents in today’s society will have on their children’s survival and reproductive success.’

The researchers said their results ruled out other theories such as the age of the mother being the contributing factor, as well as the possibility that older parents were more likely to die while the child was growing up.

However, another possibility is that over a man’s lifetime he may have less involvement with his child – a theory known as ‘diminishing paternal investment’ which they could not rule out.

Most studies into the genetic effect of having an older fathers have focused on medical and psychiatric problems, as well as intelligence.

For example, among negative effects, older fathers have been found to be more likely to have children with schizophrenia.