Chile won the 2015 Copa America on penalties and it took another spot-kick to keep them in this one—ten minutes into stoppage time after eight had been added on at the end of the game.

El Rey – The King – Arturo Vidal stepped up to fire home his second goal of the game, helping Chile finally slay a spirited Bolivia, full of fight and resilience.

Like a hand bursting through the soil at a grave at the end of a horror film, there was a chance for Bolivia at the death, but Rodrigo Ramallo fired inches wide when well placed in the box.

The contrasts between Chile’s rampant victory over Bolivia in the 2015 Copa and in this fractional one were stark. The tens of thousands crammed into Santiago’s Estadio Nacional roared their team onto a five-goal triumph. This game was a much closer affair, played out before less than 20,000 fans.

Chile supporters still lit up the Gillette stadium but in far fewer numbers, understandably. Given their first Group D game was in California, it was a big ask to expect fans to travel in their droves to north east of the States, although some did make the trek.

It was a drab first half, occasionally flaring up when a heavy challenge went in, but one of the best opportunities was denied before it had even started. Marvin Bejarano fed Tasmani Duk, who was flagged offside as he raced in on goal, even though his run had started in his own half when the ball was played. 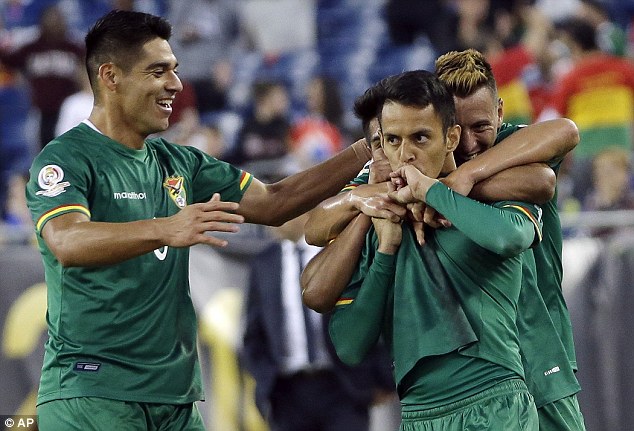 Jhasmani Campos scored Bolivia’s equaliser, a stunning free-kick from range that bent into the top corner

At the other end Alexis Sanchez’s drilled strike was blocked on the line by the brave Edward Zenteno, who put a sensitive part of his body in the way of the Arsenal forward’s strike.

Juan Antonio Pizzi sent them out with a different attitude in the second half and it paid instant dividends. Mauricio Pinilla cut in from the left and cut the ball back and Arturo Vidal swept it into the far corner.

Provider nearly turned scorer soon after, but Pinilla’s overhead kick dropped a touch wide of the post. Sanchez was then clipped in the box as he prepared to strike but didn’t get the penalty he cried out for and probably deserved. It was a pivotal moment. 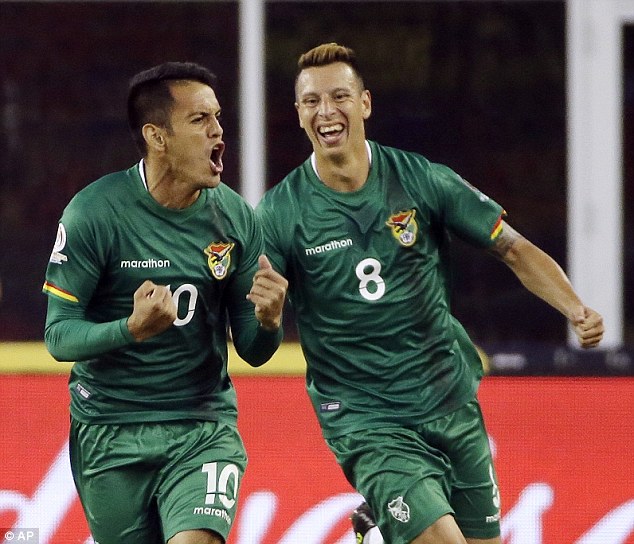 Campos, left, had only been brought on as a substitute by his manager two minutes before he scored

Jhasmani Campos came on for Raul Castro immediately afterwards, after 58 minutes. By the 61st, Bolivia were level. A free-kick nearly 30 yards out on the right didn’t seem like it would be too troublesome to defend, but Chile hadn’t anticipated such a perfect hit by substitute Campos.

His effort swerved into the top left inside netting, with Claudio Bravo getting the tip of his glove to it, but nothing else. It was a goal from nowhere, but the best of the tournament thus far.

Chile hit back. Sanchez went close with a free-kick of his own, but Carlos Lampe palmed it out and Edson Puch mishit his follow-up from just a couple of yards out, with the relieved goalkeeper able to deny him despite the proximity to goal and his position on the floor. 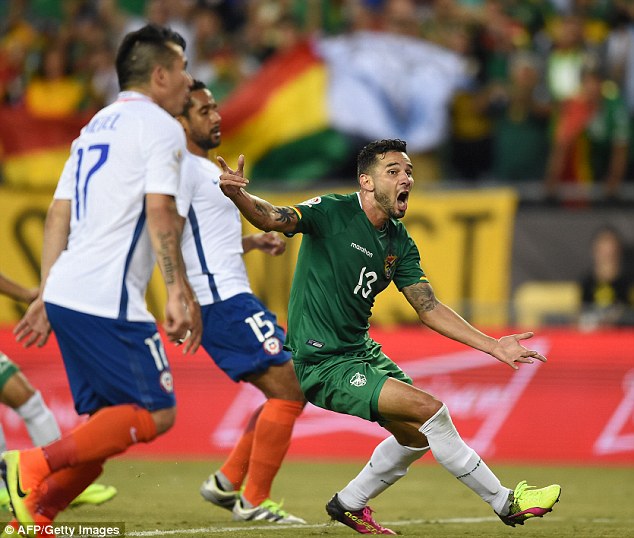 Vidal nearly had his second of the night when Alexis diverted a cross in his direction, but the Bayern Munich star’s effort from the ground trickled wide of the par post.

Zenteno made another crucial interception as the game entered the final stages, getting his head in the way to intercept it before Eduardo Vargas could convert Jose Pedro Fuenzalida’s cross from the right.

The chances kept coming for Chile but they were being denied in increasingly unpredictable ways. Lampe made a brilliant stop from Sanchez at the near post and Vargas fired in the rebound, but Eguino was on hand to hack it off the line. 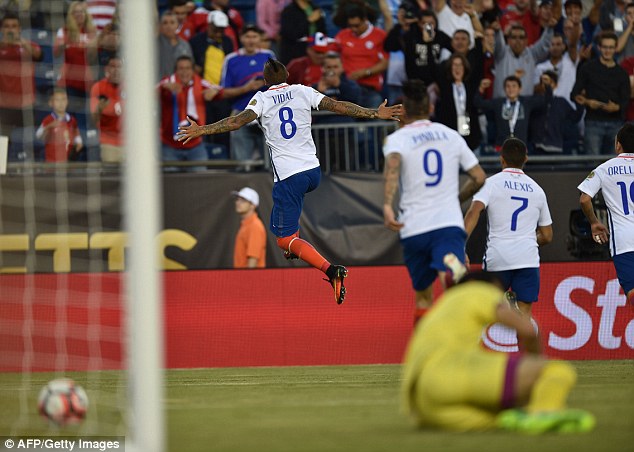 Vidal had opened the scoring for Chile, who are now at risk of an early elimination from the tournament

But just when it seemed La Roja’s luck was out, heading into the final group game in a tough spot, eight minutes of stoppage time were added on, for a couple of lengthy breaks in play towards the end to treat players.

In the last of those referee Jair Marrufo pointed to the spot when the ball struck Luis Gutierrez’s arm in the box. It was an extremely harsh call, striking near the backside of his shoulder. Bolivia protested but to no avail.

Vidal dispatched the spot-kick it leaves Chile in a favourable spot as they head into their final clash, against Panama. Even though they should make it to the quarter-finals now, the worry for Chile is why they are struggling against teams they were destroying one year ago.