Chili-shaped device reveals how hot a pepper is

Scientists have developed a portable chilli pepper-shaped device that can reveal how hot a pepper is before anyone bites into it.

The bright red Chilica-Pod device detects capsaicin, the active chemical compound in chilli peppers that gives them their palate-burning kick.

Chilica-Pod plugs into a smartphone’s USB-C port and is fitted with replaceable paper-based sensors that can read a sample of chilli mixed with ethanol.

When commercialised, the pocket-sized device could provide a quick way for foodies to avoid capsaicin’s burning sensation when out for dinner.

Chilica-Pod combines a red pepper-shaped device, replaceable sensors that fit inside, and an associated smartphone app

‘We have designed and fabricated a portable electrochemical sensor for direct detection of capsaicin in chilli samples at the point-of-testing,’ say the team of developers, led by Professor Warakorn Limbut from Prince of Songkla University in Thailand.

‘This platform shows excellent potential for the development of portable sensors for capsaicin.’

Capsaicin is found in tiny glands in the chilli’s placenta – the white spongy layer within the flesh.

Warakorn Limbut and colleagues wanted to develop a simple, accurate and cheap method to quantify the capsaicin content of chilli peppers and food samples.

Other methods that have been developed for this purpose are complicated, time-consuming or require expensive, bulky instruments. 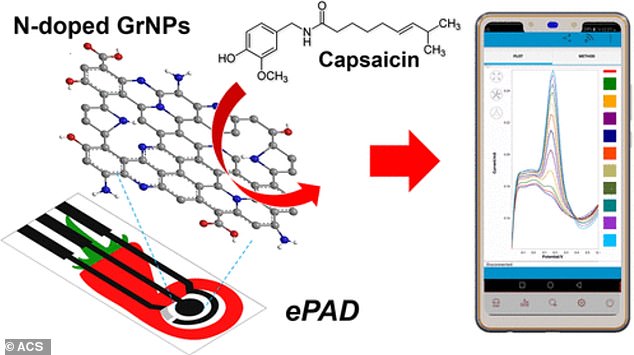 The team therefore aimed to shrink their apparatus down to the size of a chilli pepper for fun.

These have been ‘N doped’ with nitrogen atoms to improve their electrical conductivity.

When the team added a drop of diluted capsaicin to the sensor, the compound underwent oxidation and reduction reactions, producing an electrical current that the device can detect.

After optimising the sensor, the researchers used it to determine capsaicin concentrations in six dried chilli samples. 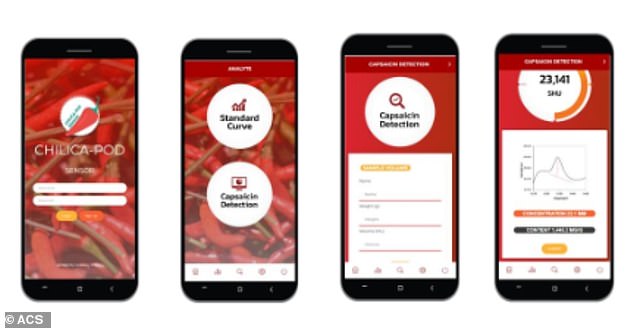 The associated app lets users view chilli heat scores, revealing the level of capsaicin, a chemical that can make your mouth feel like it is on fire

WHAT ARE THE 10 HOTTEST CHILLI PEPPERS IN THE WORLD?

They added the chillies to an ethanol-containing solution, shook it up and then introduced a drop of the sample.

A micromolar is a concentration of one millionth of molecular weight in grams per litre of fluid.

The greater the concentration of capsaicin, the higher the current, which is displayed on the dedicated app as a warning of how hot a chilli is.

It’s possible the technology, once commercialised, could help detect the ferocity of chilli species that have a similar appearance but pack different degrees of punch.

The ferocity of a chilli pepper is measured in something called Scoville heat units (SHU).

SHU can vary from just 500 for the mild Dutch Long chilli, to 1.3 million for the Naga chilli, one of the hottest in the world.

The current world record holder for heat, however, is the Carolina Reaper, first bred in Rock Hill, South Carolina, which can deliver 2.2 million SHU.

In 2018, a 34-year-old man had to be admitted to hospital with excruciating headaches and neck pain after trying the Carolina Reaper during a hot pepper-eating competition in the US. 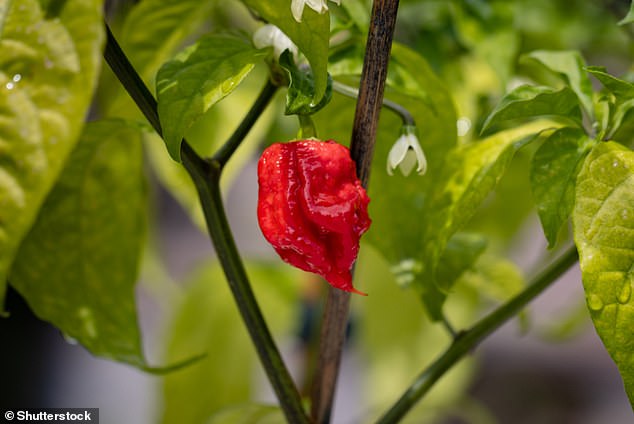 The Carolina Reaper chilli (pictured) comes in at nearly 2.2 million on the Scoville scale, which is the measurement used to determine how much punch a chilli packs

The chilli was so powerful it made several arteries in his brain constrict, medics revealed, leaving him with ‘thunderclap headaches’.

In 2016, a British man, Mark McNeil, then 36, was hospitalised after eating chicken wings doused in a sauce containing Carolina Reaper chillis.

Anyone able to eat 10 of the chicken wings would get the cost of the meal – £9.95 – refunded, he was told, but he only managed three before he was taken to hospital.

In addition to imparting a spicy flavor, capsaicin in chilli peppers has several health benefits, including anti-oxidative, anti-carcinogenic and anti-inflammatory activities.

Demand for capsaicin as a food additive and pharmaceutical agent is growing, according to the researchers, who detailed their technology in ACS Applied Nano Materials.

CHILLI SKIN SCREAM? THE MANY USES OF CAPSAICIN

Capsaicin is the ingredient found in different types of hot peppers, such as cayenne peppers, that makes the peppers spicy hot.

You can eat it in raw or cooked peppers or as a dried powder, which you can add to food or drinks.

It also is available as a dietary supplement, in topical creams that you apply to your skin, or in a prescription skin patch.

Capsaicin is used to help relieve pain. It works by first stimulating and then decreasing the intensity of pain signals in the body.

Although pain may at first increase, it usually decreases after the first use.

Capsaicin stimulates the release of a compound believed to be involved in communicating pain between the nerves in the spinal cord and other parts of the body.

When you apply capsaicin cream, gel, lotion, or ointment to the skin, it may help relieve pain from:

– Pain disorders, including pain after surgery.

– Joint problems such as osteoarthritis and rheumatoid arthritis.

– Skin conditions such as psoriasis.

– Mouth sores due to chemotherapy or radiation.

You can put products that contain capsaicin on your skin up to four times a day.

University of Michigan says: ‘You may feel a burning or itching sensation the first few times you use capsaicin, but this will gradually decrease with each use.

‘Wash your hands thoroughly after each use to avoid getting capsaicin in your eyes or on other moist mucous membranes, where it can cause a burning sensation. Do not use capsaicin on areas of broken skin.’

When you eat hot peppers or take capsaicin as a dietary supplement, the capsaicin may improve your digestion by increasing the digestive fluids in the stomach and by fighting bacteria that could cause an infection.

It may also help fight diarrhoea caused by bacterial infection.

Capsaicin acts as an antioxidant, protecting the cells of the body from damage by harmful molecules called free radicals.

Capsaicin may also make mucus thinner and help move it out of the lungs. It is also thought to strengthen lung tissues and help to prevent or treat emphysema.

Experts in the US generally consider capsaicin to be safe. But it can cause some unpleasant effects, especially for those who are not used to it and an allergic reaction to capsaicin is possible.

If you are just beginning to use capsaicin, either as fresh or prepared food or in powder form, start with small amounts. If you use a topical product that contains capsaicin, you should first apply it to a small area of skin to test for an allergic reaction.

Don’t let capsaicin come into contact with your eyes.