A Tex-Mex food chain — or any restaurant, for that matter — is hardly the place most people would expect to find helpful explanations of their healthcare benefits. Guacamole? Yes. Help with co-pays? Not so much.

But one social media user seems to have known something the rest of us don’t: That sometimes, ‘Chili’s knows’.

Last week, an Austin, Texas Twitter user who goes by @subtlerbutler posed an unlikely question about healthcare to the casual dining chain — and they promptly replied with a helpful answer.

Interesting story: Texas Twitter user @subtlerbutler was tweeting about asking actual people questions instead of posting on the internet 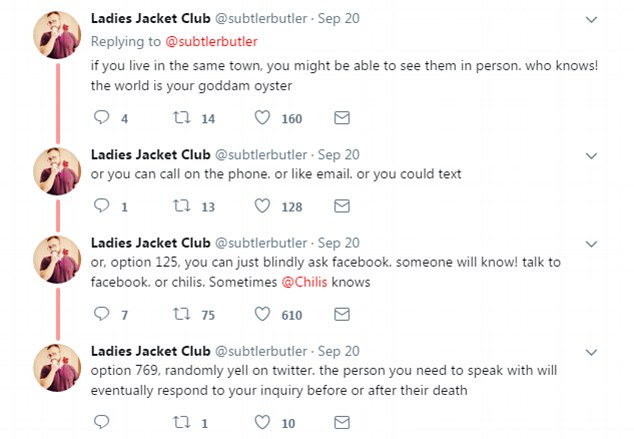 Options: He suggested several ways to ask people and added that you can also ask Chili’s because ‘sometimes Chili’s knows’ 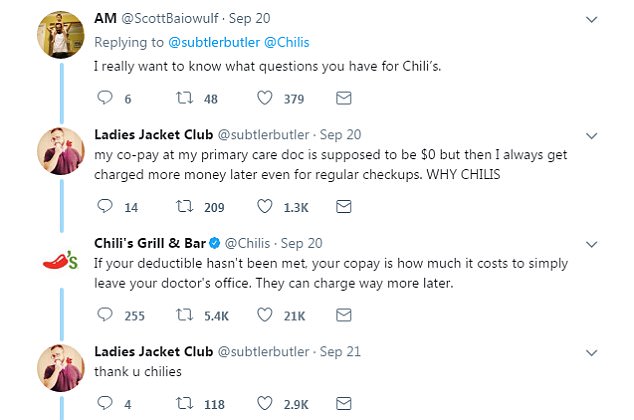 Aha! He then demonstrated by asking why his co-pay was often higher than it should be, to which Chili’s replied with an explanation of deductibles

The user @subtlerbutler’s thread of tweets initially had nothing to do with Chili’s at all — rather, he appeared to be ranting about people posting questions on sites Quora or Yahoo Answers instead of asking real people.

‘There’s this weird thing you can do, where, if you need information from someone, you can ask them instead of the internet,’ he tweeted. ‘If you live in the same town, you might be able to see them in person. Who knows! The world is your goddam oyster.

‘Or you can call on the phone. Or like email. Or you could text. Or, option 125, you can just blindly ask Facebook. someone will know! Talk to Facebook. Or chili’s. Sometimes @Chilis knows.’

Naturally, the inclusion of Chili’s on this list caused quite a few people to chuckle — and ask what is the world could possibly be an appropriate question for Chili’s

‘I really want to know what questions you have for Chili’s,’ one person tweeted in reply. Amazing: Chili’s offered a detailed and correct answer despite healthcare not having anything to do with Tex-Mex food 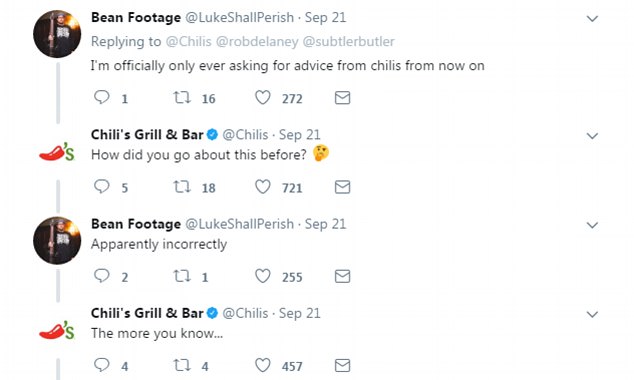 Amazed: Other Twitter users were shocked and delighted by the answer

Help me, Chili’s: Others posed their own questions, including this one about a woman’s love life

Need advice: Chili’s offered up a Plutarch quote when asked about learning from one’s mistakes

On a roll! The advice was both helpful and witty

So @subtlerbutler gave an example. He tweeted: ‘My co-pay at my primary care doc is supposed to be $0 but then I always get charged more money later even for regular checkups. WHY CHILIS.’

Shockingly, less than a half hour later, Chili’s Twitter account replied — and actually took the time to offer a thoughtful and correct answer.

‘If your deductible hasn’t been met, your copay is how much it costs to simply leave your doctor’s office. They can charge way more later,’ Chili’s replied.

Unsurprisingly, Chili’s prompt reply about such an unrelated subject quickly caught the attention of thousands, who found the chain’s help quite funny. A few even chimed in with their own questions. 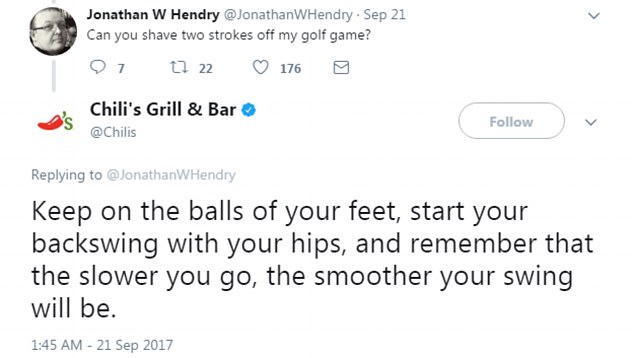 Sporting expertise: They helped this man improve his golf game

Can’t do all: Unfortunately for Erin, they couldn’t solve her issue with skinny jeans 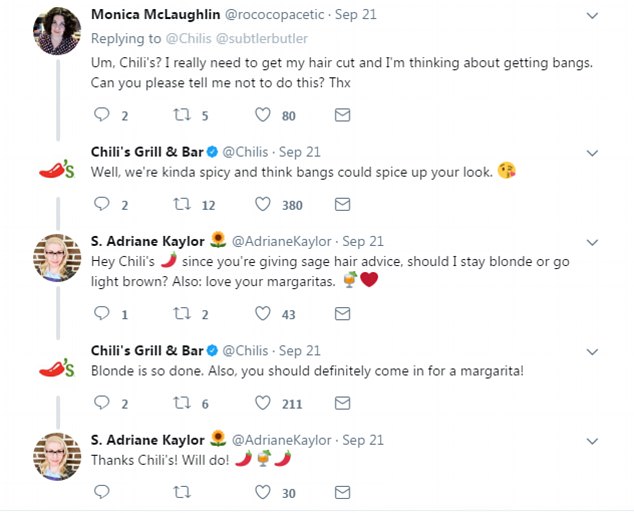 Chili’s does hair now? They also helped two women decide what to do with their hair

One romantic asked Chili’s why her love life was ‘so hopelessly bad’, to which the chain had a pep talk ready.

‘It’s not always as bad as it seems. While at times life can feel overwhelming, there’s always more good than bad. You simply have to look for it,’ they wrote.

To a user that asked how to do a better job learning from his mistakes, Chili’s offered up a Plutarch quote about wine men learning wisdom from their missteps.

The chain gave advice for improving your golf game and changing hairstyles, too, telling one woman who wasn’t sure if she should dye her blonde hair light brown: ‘Blonde is so done.’

However, even the all-knowing Chili’s has its limits. They told one woman who begged for the skinny jeans trend to be over: ‘That’s one thing we have no control over.’