A criminal enquiry has been opened in France after anti-Semitic graffiti recalling the darkest days of the Holocaust appeared in Paris.

The word ‘Juden’ – German for Jew – was sprayed in yellow paint on the window of a bagel shop in the city’s 4th arrondissement on Saturday night.

This is the historic area of the capital city where thousands of men, women and children were rounded up by collaborating French police and German soldiers during the Second World War.

Many had to wear yellow stars identifying their religion, and their businesses were ‘tagged’ with the word Jew, before they were taken to their deaths in concentration camps.

The Bagelstein shop on the Ile St Louis (St Louis Island) was spray painted in yellow with the word ‘Juden’, meaning Jew in German 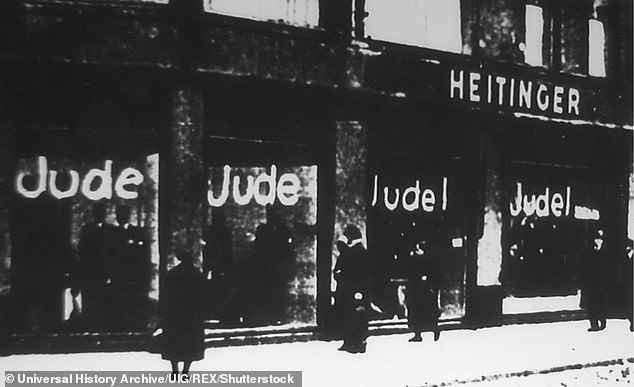 The shocking graffiti invokes the memory of the anti-Semitic activity of the Nazis, who worked alongside the rulers of Vichy France to round up Jews in Paris and beyond  (pictured: Jewish businesses are attacked in Germany in 1933)

‘An anti-Semitic tag in the middle of Paris,’ said France’s Interior Minister, Christophe Castaner, as he reacted to the latest outrage.

He added: ‘One too many. Juden in yellow letters, as it the most tragic lessons of history no longer enlighten consciences.

‘Our answer: to do everything to make sure the perpetrator of this outrage is prosecuted. Our pledge – don’t let anything pass.’

Gilles Abecassis, the owner of the Bagelstein shop on the Ile St Louis (St Louis Island) said: ‘We discovered this tag on Saturday morning and it was probably done overnight from Friday to Saturday.’ 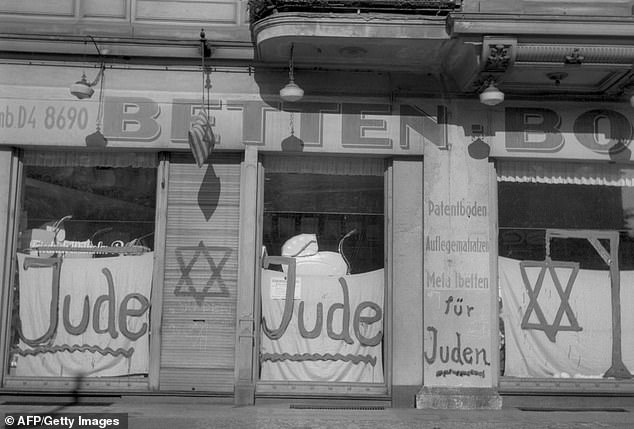 A Jewish-run shop is tarnished with anti-Semitic graffiti in June 1938 in Berlin, Germany

This was the day that the Yellow Vests – the social movement threatening President Emmanuel Macron’s government – went on the rampage around Paris for the 13th Saturday in a row.

They have been associated with a number of anti-Jewish incidents, and are known to number neo-Nazis in their ranks, but there was no immediate evidence linking them with the bagel shop incident.

The Paris prosecutor’s office has now opened an investigation for ‘aggravated voluntary damage’ and ‘provocation to racial hatred’.

LICRA, France’s league against racism and anti-Semitism, posted a photo from Nazi Germany in 1938, contrasting it with an image of the Bagelstein graffiti. 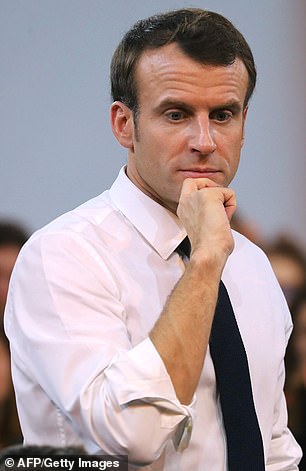 Far-Right parties in France including the National Rally – which used to be called the National Front – have a history of anti-Semitism, and their members are regularly convicted for crimes including Holocaust denial.

Ariel Weil, mayor of the 4th arrondissement, said the perpetrators of the latest attack were among those who ‘were nostalgic for the Third Reich’.

They were brutalised not just by the Nazis, but by French police and paramilitaries, and then entrained on wagons belonging to SNCF, France’s national railway.

It is only in recent years that the French have begun to acknowledged the part they played in the Holocaust.

It was as recently as 1995 that the then conservative president Jacques Chirac finally publically admitted that French police and other authority figures had helped arrest 13,152 Jews on two days – July 16 and 17 1942 – in Paris.

They included more than 4,000 children, and all were held at the so-called Vel d’Hiv cycle stadium before being entrained to camps such as Auschwitz.

The release of crucial records – including those of the collaborating Paris police – have made the work of historical researchers far easier.