Chilling CCTV has emerged showing a knifeman stalking a terrified 19-year-old woman through dark city streets ‘in a scene reminiscent of Luther’.

Peter Hills, 25, pursued the Italian teenager through Plymouth on January 2 before attacking her in a secluded area and saying: ‘I have to kill you.’

During the shocking incident, which took place as the teenager was returning from a Christmas break in Italy, Hills held a seven-inch kitchen knife next to her chest.

He was found guilty of false imprisonment, being in possession of a bladed article and making threats to kill the woman at Plymouth Crown Court.

Peter Hills, 25, pursued the Italian teenager through Plymouth on January 2 (pictured in CCTV) before attacking her when she reached a secluded area 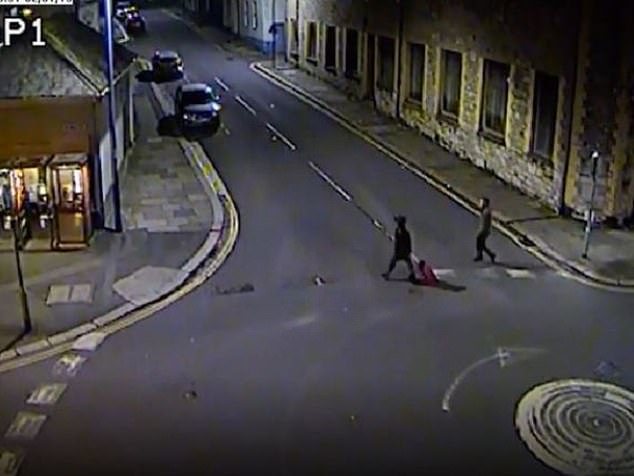 Hills walked only a short distance away from the victim, as he pursued her before holding a large kitchen knife just inches away from her chest

Hills, of no fixed address, had denied the charges saying it was a case of mistaken identity.

But police said Hills ‘hunted’ the victim likening the incident to a scene from the popular BBC crime drama Luther.

DC Nathan Drew, of Plymouth CID, said: ‘This was an extremely disturbing case involving a stranger-attack on a lone female in a dark, deserted city centre.

‘The victim was in the wrong place at the wrong time, having just returned to Plymouth from Italy.

‘Chilling CCTV footage, reminiscent of a scene from the TV show Luther, shows she was hunted through the streets of Plymouth, until she reached a secluded spot and was attacked.

‘Fortunately, a good Samaritan heard her cries and his shouts stopped the attacker. The defendant’s actions were captured on the vast number of CCTV cameras we have in Plymouth and we were able to identify and capture him.’ 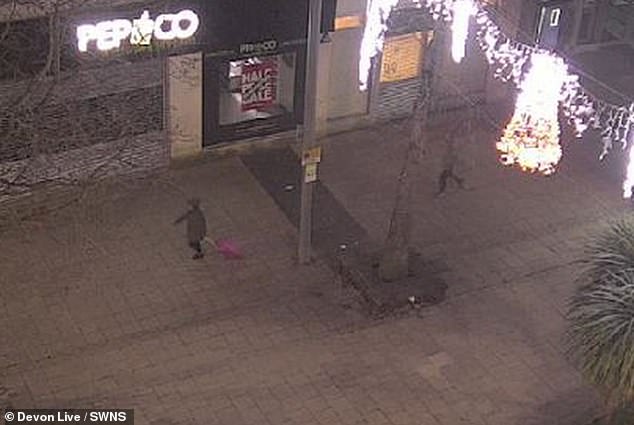 Hills was found guilty of false imprisonment, being in possession of a bladed article and making threats to kill the woman at Plymouth Crown Court (he is pictured stalking the victim in CCTV) 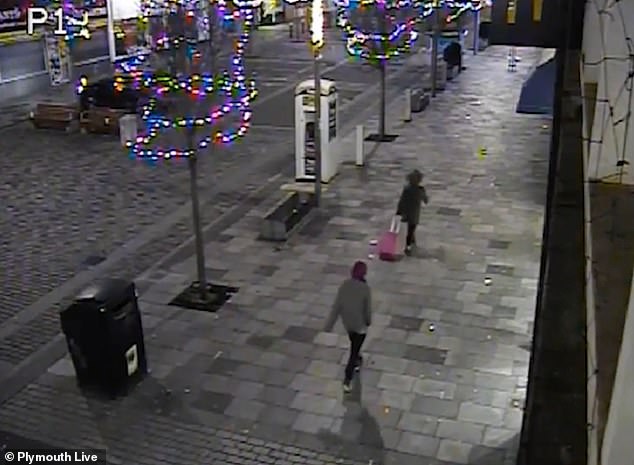 Hills, of no fixed address, had denied the charges saying it was a case of mistaken identity. But police said he had ‘hunted’ the victim, and is pictured here in CCTV

The trial at Plymouth Crown Court heard how the victim had just returned to Plymouth from a Christmas break in Italy when she was attacked on January 2.

Brian Fitzherbert, prosecuting, said she left the main coach station in Armada Way at about 6am.

The barrister showed the jury CCTV of a man following the woman a few metres behind through dark and deserted streets.

She said one hand suddenly appeared over her shoulder and she saw the other holding a kitchen knife about six or seven inches long.

The 19-year-old described how the blade was held a few inches from her chest.

She said she felt ‘blocked’.

Mr Fitzherbert put her statement to her and she confirmed that the man said ‘I have to kill you’ several times.

The witness added that she could not recall how long the stranger had held her.

But she said that she screamed and he ran away. 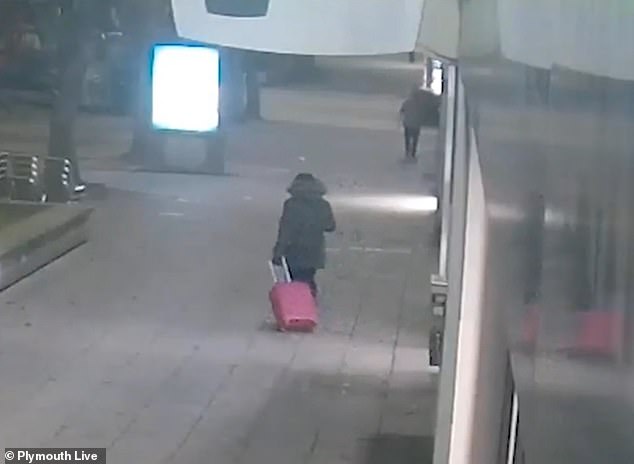 The 19-year-old emerges from a central bus station in Plymouth, as Hills waits (top-right) before following her through the streets of the city

Nearby resident David Evans said in a statement that he heard the scream as he awoke.

He added: ‘I jumped out of bed and moved towards the window. I could not see anything. I shouted out “go away, you leave her alone” or words to that effect. It was instinct.’

The retired man said he saw the woman walking away from the park and then heard an unseen man shout out: ‘She has fallen over, mate’.

Earlier Mr Fitzherbert told the court that the intervention was ‘inspired’ as the attacker was ‘spooked’ and let go of the teenager.

He added that a police officer saw the CCTV and identified Hills, having dealt with him previously.

The barrister said that a second constable later confirmed the identity of the defendant.

He said: ‘This was an isolated incident and I hope this sends out a message to the people of Plymouth that the city centre is saturated with CCTV, for their safety.

‘A number of police officers have worked hard on this case ensuring an extremely disturbing individual is no longer a danger to the public.

‘That have also ensured that a victim of a very serious crime, who does not speak our language or live in our country, has felt supported and confident in Devon and Cornwall Police and our criminal justice system to deliver the right result for her.’

Hills was arrested ten days after the offence while sleeping in a subway.

Sentencing was adjourned for a psychiatric report to be prepared. Hill was remanded in custody.