Two armed men who stormed a bowling club and terrorised a female worker before fleeing with cash from pokies have been jailed over the terrifying attack.

Father-of-two Brent Henderson was armed with a shotgun when he stormed the Abermain Bowling Club in the NSW Hunter region in 2017.

Chilling CCTV footage captured the moment he burst through the doors with his sledgehammer-wielding accomplice Joel Shoesmith.

The pair made a beeline for a female employee closing up the shop alone.

The security footage showed the woman raising her hands in the air before the two thugs tied her hands and feet with duct tape.

Henderson and Shoesmith ransacked the till and then turned their attention to the club’s poker machines and ATMs.

Realising they needed the staff member’s help to access the extra cash, they proceeded to untie her and march her from pokie to pokie at gunpoint.

She was then forced back to the ground to again have her limbs bound with duct tape.

The pair then left the bowling club with bags filled with the evening’s takings.

They made off with $16,000 in cash as the traumatised worker was left tied up and struggling and the ground.

The blackened and burnt out shell of their getaway car was later found nearby. 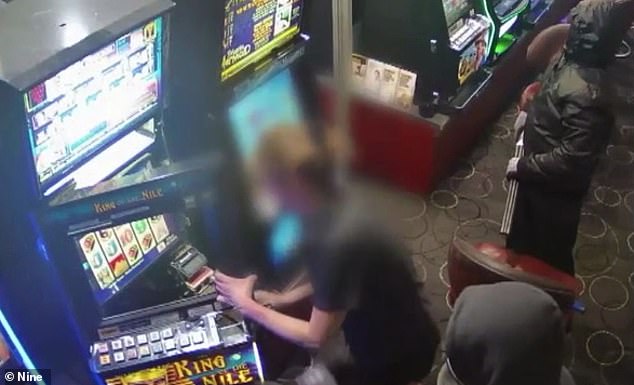 Shoesmith was arrested after the robbery and plead guilty – receiving a four year prison term.

Henderson was arrested three months later and contested his charges.

Two subsequent trials failed to reach a result and a third ended with a hung jury.

On Monday, he was found guilty of armed robbery and sentenced to a maximum seven years and six months in prison, reports 7 News.

The result also ended a blanket suppression order of his case allowing the shocking CCTV footage to be released.

Henderson will be eligible for parole in 2023. 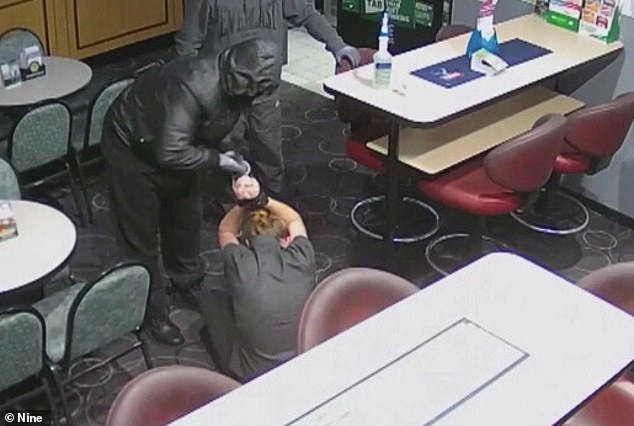 The pair then tie the woman with duct tape and flee the venue (pictured). Their burnt out car was later found nearby