This is the chilling moment a masked teenager armed with a bag of knives calmly strolled into a local shop before he stabbed a worker to death as she stacked shelves.

Ethan Mountain, 19, was wearing a horror mask and had his hood up, when he launched a ’50 second’ attack on 62-year-old grandmother Joan Hoggett in the One Stop Shop at Fulwell, Sunderland.

The frenzied assault left her with 29 knife injuries which caused damage to her heart, lung, arteries and intestine.

Today, he was cleared of murder.

The teenager admitted manslaughter on the grounds of diminished responsibility – a year after he told his health support team ‘someone will get killed’.

The attack, which happened shortly before closing time on September 5 last year, led to ‘catastrophic’ blood loss, which sent the shop assistant into cardiac arrest and resulted in her death.

Mountain left a blue Nike holdall at the scene, which contained a sheathed Hibben custom knife, a sheathed samurai sword, two sheathed machetes, a hunting knife, a hinged knife, clothing, and a document with his name on.

The 19-year-old, of Heaton Gardens, South Shields, who is currently detained in Rampton top security hospital.

He had been on trial at Newcastle Crown Court, where prosecutors claimed the killing, which may have been part of a botched attempted robbery, was murder.

But Mountain’s legal team claimed the teen was suffering an abnormality of mind at the time of the killing, which impaired his responsibility for it.

Prosecutor David Brooke QC said today it is now accepted on both sides that Mountain is a paranoid schizophrenic and ‘very ill’.

Mr Brooke said: ‘This is one of those rare cases that should not proceed any further.

‘In the circumstances, notwithstanding this killing, which we all acknowledge was a horrific one, the Crown take the view that the proper course here is not to seek a conviction in respect of count one (murder).’

Trial judge Mr Justice Butcher order the jury to deliver a not guilty verdict in respect of the murder charge.

Mountain will be sentenced for manslaughter next Friday.

Consultant forensic psychiatrist Ramneesh Puri told jurors about Mountain’s history, which included him being diagnosed with ADHD when he was 12 and being hospitalised and diagnosed as ‘acutely psychotic’ between June and August 2017.

Mountain had been admitted to hospital due to his paranoid thoughts and thoughts of ‘harming others with an axe, hammer, knife and belt’.

During his stay, Mountain described himself as a ‘bad person’ and told staff he would ‘end up in Broadmoor’.

Dr Puri told the court: ‘He said he needed to remain in hospital in order to prevent him harming anyone.’

The court heard while in hospital, Mountain had confessed to ‘stalking people in parks’ and said he ‘wanted to harm them but never did’.

Jurors were told he had said he would kill himself rather than hurt anyone else and was ‘distressed’ by his own thoughts.

Mountain had also told staff: ‘Everyone thinks that I am a good person, that’s because of the ability to charm people and they trust me.

‘You may think that’s scary, someone having the thoughts I am having, to trick someone into thinking I’m a nice person when inside I want to seriously hurt them.’

Mountain said he started taking cannabis at age 15 but cut back because he experienced ‘profound hallucinations’.

He also claimed to have harmed animals in the past and told medics: ‘Someone will get killed and then I will get arrested.’ 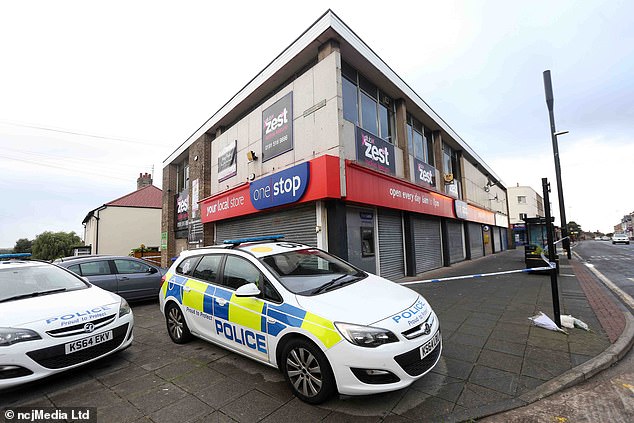 The 62-year-old was stabbed during a shift at the One Stop Shop on Sea Road, Seaburn, Sunderland 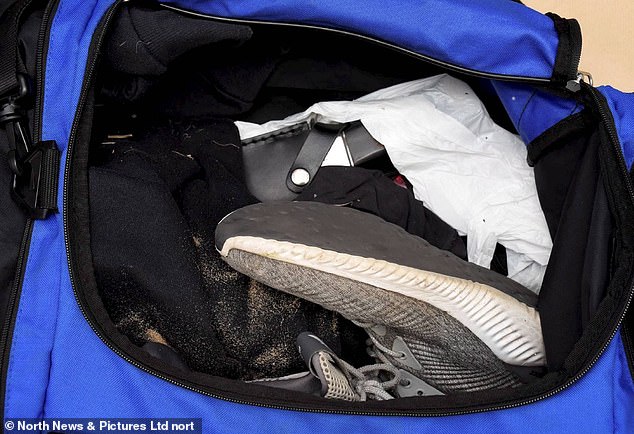 Pictured: A bag left at the scene by Mountain, which contained a variey of knifes 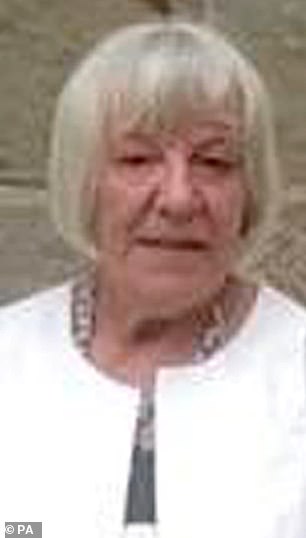 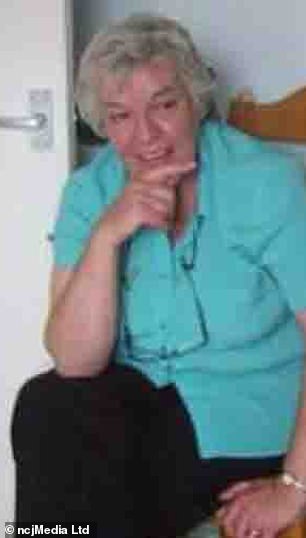 His barrister Leonard Smith QC said the teen could face a period of detention or be given a hospital order, which would mean The Home Secretary would have to approve his eventual release.

Medical evidence will be heard at the next hearing, before Mr Justice Butcher decides on the appropriate outcome.

Mr Smith apologised to the family of Mrs Hoggett for his application to adjourn the sentence, while the medical evidence is gathered.

He added: ‘I have complete and genuine sympathy for the family of Mrs Hoggett.

‘I know me making this application will be causing further pain to them.’

Mr Smith said, whatever the outcome, Mountain will be detained for a ‘very, very long time indeed’.

Mr Justice Butcher agreed to adjourn the case until next Friday but added: ‘I am very reluctant to prolong the agony for the family in this most distressing case.’

The court heard Mountain had been diagnosed with ADHD when he was just 12 and was detained in a psychiatric hospital between June and August 2017, where he made chilling revelations about his thoughts.

Mountain had told staff: ‘Everyone thinks that I am a good person, that’s because of the ability to charm people and they trust me.

‘You may think that’s scary, someone having the thoughts I am having, to trick someone into thinking I’m a nice person when inside I want to seriously hurt them.’

Mountain, who said he started taking cannabis at age 15 but cut back because he experienced ‘profound hallucinations’ claimed to have harmed animals in the past and told medics: ‘Someone will get killed and then I will get arrested.’

The court heard Mountain was on a ‘low dose’ of anti-psychotic medication when he was released from the psychiatric hospital in August 2017, a day before his 18th birthday, and started drinking vodka, heavily.

Mountain claimed he had stopped taking his prescribed medication ‘about a week before’ he attacked Mrs Hoggett and was due to see a psychiatrist the following month.

During interview after the attack, Mountain told a psychiatrist he had been hearing voices and had had an argument with his mother just before the killing.

Mountain said he had limited recollection of the actual attack on Mrs Hoggett.

He told a psychiatrist: ‘I can’t remember physically doing it, I just remember walking to the shop, thinking people were talking about me and then I was coming out of the shop, covered in blood.

‘I knew I had done something wrong, I went to the park and began self-harming.’

Mr Brooke QC had showed the court shocking cctv footage that captured Mountain leaving his home in South Shields, walk to East Boldon Metro station and board a Metro train to Seaburn, carrying the rucksack.

After leaving the Metro at Seaburn station, Mountain walked to the shop and appeared to pause for around a minute, and put on the mask, before he entered the store.

The video recording from inside the shop showed Mountain, wearing a hood and mask, approach Mrs Hoggett as she worked in one of the aisles.

The killer then launched the attack, appeared to pause, and then continue the violence before leaving.

Mr Brooke told the court the ‘matter was over in about 50 seconds’. 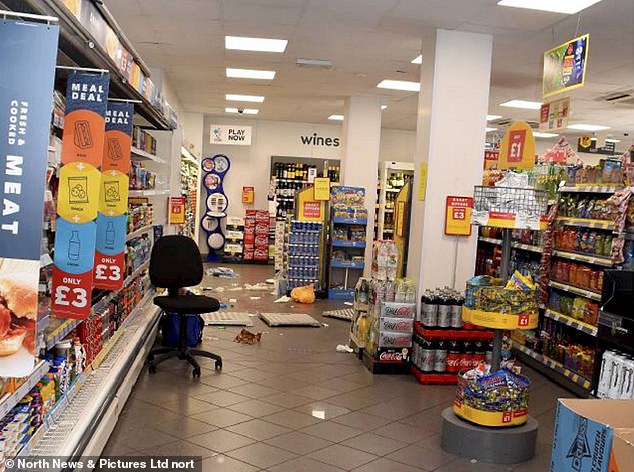 The scene in the One Stop Shop in Fulwell, Sunderland, where the attack took place

The court heard Mountain had turned up at a friend’s house in the hours after the killing, wearing bloodstained clothing and with superficial cuts he may have caused to himself.

He told the pal he had ‘stabbed someone’ and said he had been ‘seeing people and hearing stuff’.

‘This was a horrific incident and what further shocked me and the community was the absolute randomness of the attack,’ Supt Milner said.

‘Generally, with these types of crimes – which are very rare in the North East – the perpetrators are known to the victims. 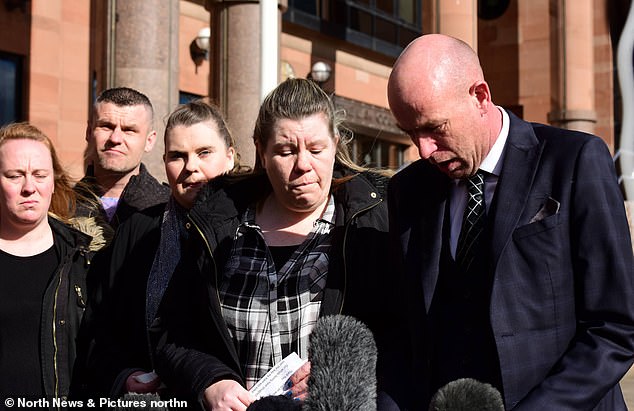 The family of Joan Hoggett read a statement outside Newcastle Crown Court. Reading the statement (centre) is Michelle Young (Joan’s daughter), next to her is Robert Young (Joan’s son)

‘However, there was no link whatsoever between Ethan Mountain and Joan Hoggett, who went to work fully expecting to return home to her loved ones that night.

‘I would like to thank Joan’s family for the incredible bravery they have shown over the last six months, as well as the team of detectives for their dedication and hard work on this case.

‘Following Joan’s death, the community of Sunderland came together to pay their respects and show unity in response of this devastating incident.

I would like to thank everybody, especially those who live in Fulwell, for their cooperation and assistance throughout this investigation.’