Chimpanzees living at Africa’s Loango National Park in Gabon are attacking and killing gorillas that also call the region home in what researchers are saying is a first in the scientific community.

A team of scientists from Osnabrück University and the Max Planck Institute suggest two lethal attacks  are a result of the animals competing for food that is diminishing because of climate change, researchers note in a press release.

Prior to the deadly incidents, researchers observed nine occasions during 2014 through 2018 where chimpanzees and gorillas interacted peacefully and even co-fed in fruiting trees.

The harmony came to a screeching halt in 2019, when, on two occasions, chimps formed coalitions and attacked a group of gorillas for a combined 124 minutes that ended with two dead infant gorillas.

The second encounter ended with a dead, mutilated infant that was almost entirely consumed by one adult chimpanzee female.

On two occasions, chimps formed coalitions and attacked a group of gorillas that ended with two dead infant gorillas. And the second encounter (pictured) ended with a dead, mutilated infant that was almost entirely consumed by one adult chimpanzee female

Tobias Deschner, a primatologist at the Max Planck Institute for Evolutionary Anthropology, said in a statement: ‘It could be that sharing of food resources by chimpanzees, gorillas and forest elephants in the Loango National Park results in increased competition and sometimes even in lethal interactions between the two great ape species.

‘The increased food competition may also be caused by the more recent phenomenon of climate change and a collapse in fruit availability as observed in other tropical forests in Gabon.’

The first lethal encounter, which lasted for 52 minutes, was observed on February 6, 2019 and ‘occurred after a territorial patrol during which the males made a deep incursion into a neighboring chimpanzee territory,’ reads the study published in Scientific Reports. 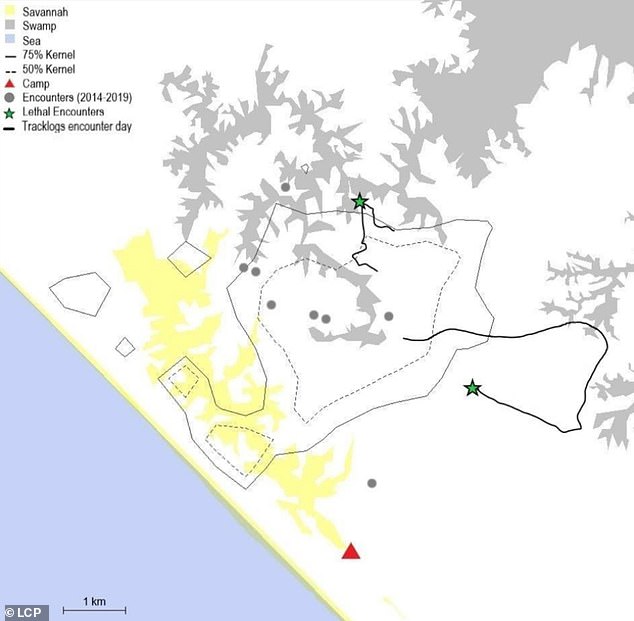 A party of 27 chimpanzees encountered a group of five silverback gorillas in a thicket, in which the pack of chimps began screaming and barking at the others.

This appeared to agitate the silverbacks, with one charging at an adolescent female chimpanzee and ‘knocking the air out of her.’

The chimpanzees began to violently jump up and down and hit the silverback  that eventually escaped and returned to his own group.

Shortly after the vicious  encounter, the researchers spotted an adult male chimpanzee, named Littlegrey, holding an infant gorilla while sitting on the ground, which was then inspected by three other chimpanzees. 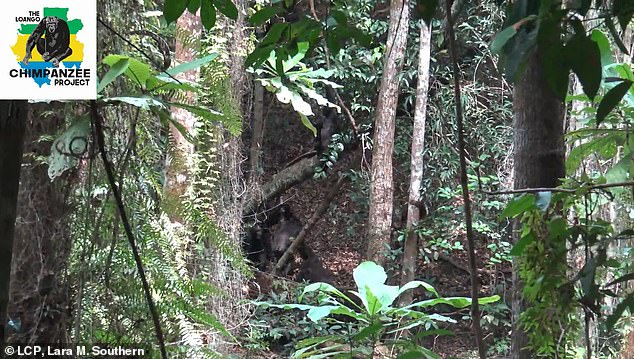 The first lethal encounter (pictured), which lasted for 52 minutes, was observed on February 6, 2019 and ‘ occurred after a territorial patrol during which the males made a deep incursion into a neighboring chimpanzee territory

‘Littlegrey sniffed the infant, placed it on the ground in front of him and hit the infant three times with his right hand. At this point the gorilla infant was still alive since short squeaks and whimpering sounds could be heard.

At 5:27pm [25 minutes since the encounter began], and directly following a distress vocalization of the infant gorilla, a whimper of a different gorilla was heard close by,’ reads the study.

The infant was then passed between two other chimpanzees, but stopped screaming at 5:53pm and the scientists noticed its little body laid there lifeless.

The second lethal attack, which lasted for 72 minutes, was observed on December 11, 2019  by observation teams following a group of 27 chimpanzees moving throughout the region.

‘Given the direction and the surreptitious behavior of the individuals present, including frequent sniffing of the ground and vegetation, a territorial patrol seemed imminent,’ the researches wrote in the study.

The event began at 12:26pm, when a chimpanzee named Freddy stopped in his tracks and sounded loud alarm barks.

Two minutes later, the chimpanzees spotted a rustling tree in which a female gorilla was resting.

When the gorilla spotted the chimps below she began beating her chest and barking, and in less than a minute, a group of other gorillas rushed to her aid in the tree. 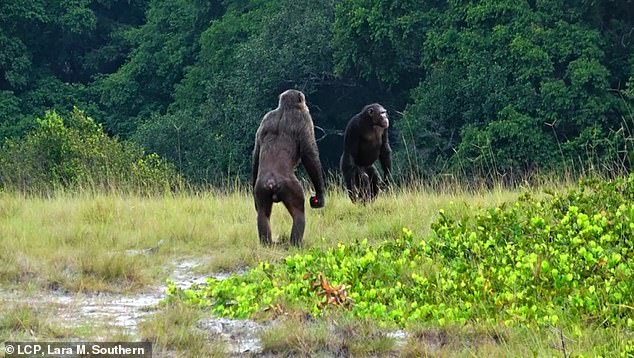 However, the sight of four gorillas and two infants did not deter the aggressive chimps, which began scaling the tree to attack.

All of the gorillas were able to escape except for one female and her infant, which began to move throughout the tree with the hopes of eluding their opponents.

‘At 12:50, the gorilla female (AF1) was seen, without her infant (I1), climbing up a nearby tree, observed by several chimpanzees (Freddy, Gump, Louis, Mimi, Moana, and Thea). She managed to flee via the canopy,’ reads the study.

One minute later, an adolescent chimp named Caesar was seen holding the body of a dead infant gorilla, which had a large open cut in the stomach with the intestines partially hanging out.

When scientist got a close look at the body, the spotted female chimpanzee eating small pieces of meat from the extremities of the dead baby gorilla.