China claims coronavirus may have started in AUSTRALIA

Beijing has claimed that coronavirus may have spawned outside China and travelled to a wet market in Wuhan via frozen food exports from countries including Australia.

An article in the government-controlled Global Times newspaper on Sunday said the idea the virus was imported into the Huanan wet market last year ‘cannot be ruled out’ – although it admitted there is no supporting evidence.

Beijing has been pushing the theory since October when experts tracing an outbreak in Qingdao city found living coronavirus samples on packets of imported frozen cod. 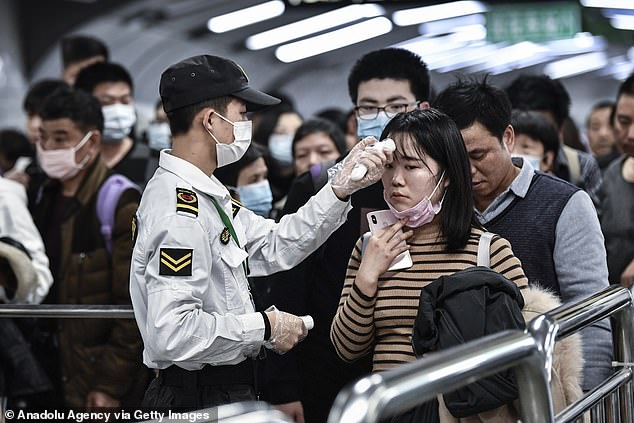 Coronavirus cases were first reported in Wuhan in December before spreading rapidly around the world, causing 1.5million deaths. Pictured: Temperature checks in Guangzhou in January 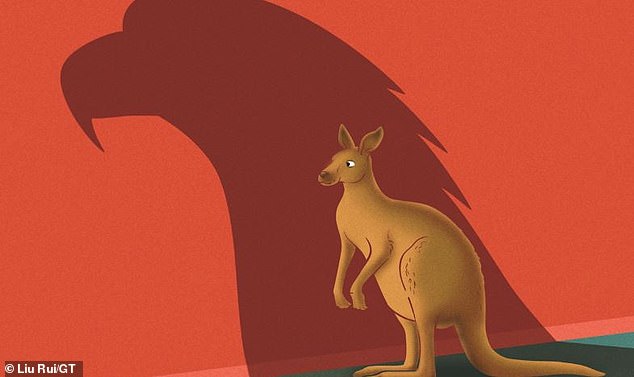 The Global Times also claimed Australia has been ‘the pawn in the US regional strategy in the recent years’ and pictured a cartoon of a kangaroo projecting the shadow of an eagle, the national emblem of America

Western scientists say the theory is ‘highly speculative’ and believe it is much more likely that the disease first passed from animals to humans in the Wuhan area.

Coronavirus cases were first reported in the Chinese city of Wuhan in December last year before spreading rapidly around the world, causing 1.5million deaths and wrecking economies.

In a separate article on Sunday, the same newspaper claimed Australia has been ‘the pawn in the US regional strategy in the recent years’ and pictured a cartoon of a kangaroo projecting the shadow of an eagle, the national emblem of America.

The publication said cold-chain products were imported into Wuhan from several countries including ‘meat products from Brazil and Germany… Australian steak, Chilean cherries and Ecuadorian seafood.’

The Chinese Center for Disease Control and Prevention said in October that lab tests confirmed Covid-19 could survive for a long time on frozen food packaging.

Yang Zhanqiu, a pathology expert at Wuhan University, told the Global Times the discovery made it possible that the virus was initially imported into China.

‘The idea never crossed our minds before. But now it seems plausible that the virus may have been imported to Wuhan via imported cold-chain products,’ he said.

The World Health Organisation has said the virus can ‘survive a long time under cold storage conditions’ but examples are ‘rare and isolated.’ 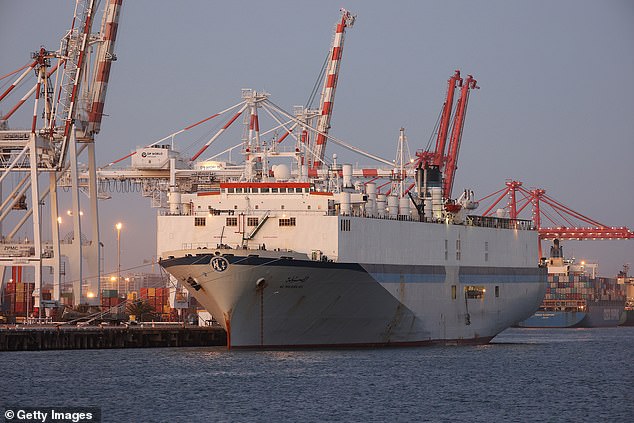 The Global Times newspaper said that frozen beef was exported from Australia to Wuhan before coronavirus broke out there. Pictured: An Australia export ship

The Global Times said that since July there have been 40 cases of coronavirus being found on cold-chain imports, including on imported beef.

The article quoted a local seller saying most frozen food sold at Huanan Seafood Market is imported from abroad.

‘The products produced in China are clean. I am not sure about imported goods,’ the seller said.

The Global Times article also listed customs data which showed that Hubei, the province that contains Wuhan, had a 174 per cent increase in frozen product imports in 2019 compared with the previous year.

However, the authors admitted there was no evidence to support the theory that the virus started outside China.

An anonymous expert was quoted as saying: ‘Theoretically, it is possible that coronavirus from other countries caused the early outbreak in Wuhan, but we lack evidence.’

China cites frozen food packaging as a risk in spreading Covid-19 and has stepped up inspections even though the World Health Organization says neither food nor packaging is a known transmission route.

This is not the first time Beijing has pushed the theory that Covid-19 was brought into China on frozen food packets. 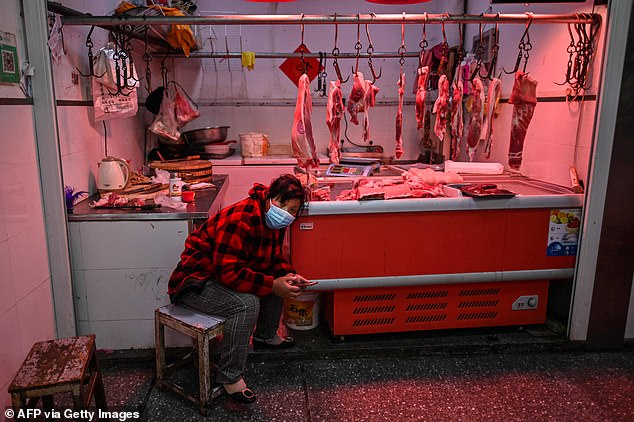 The government-controlled People’s Daily newspaper published an article on November 25 titled ‘COVID-19 did not start in central China’s Wuhan but may come through imported frozen food and packaging: experts.’

The previous week the The Global Times had also pushed the theory, quoting Zeng Guang, former chief epidemiologist of China’s Center for Disease Control, as saying: ‘It is very likely that the virus had co-existed in multiple places before being spotted in Wuhan.’

The expert said the virus was identified in Wuhan thanks to the strength of China’s infectious disease prevention system, which was developed in response to the SARS outbreak in 2002-2003.

Foreign ministry spokesman Zhao Lijian told a news briefing last month: ‘Although China was the first to report cases, it doesn’t necessarily mean that the virus originated in China.

‘Origin tracing is an ongoing process that may involve multiple countries and regions,’ he said.

In March, Lijian had suggested that the US army brought the virus to Wuhan.

The Chinese government’s top diplomat, State Councillor Wang Yi, has also said it was unclear whether the virus originated in China. 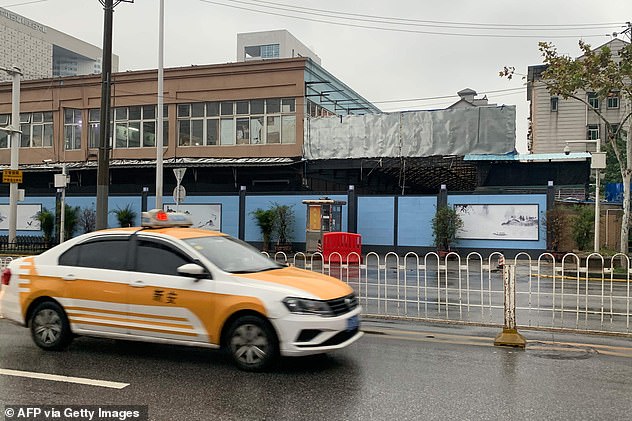 The Global Times and other Chinese media has cited a paper published by Italy’s National Cancer Institute which said Covid-19 antibodies had been found in samples of cancer patients taken there in October last year.

Another paper published earlier this year claimed to have found traces of SARS-Cov-2 in the sewage system of Barcelona in samples taken in March 2019 – but both studies have drawn criticism in the West.

‘Strong claims supported by flimsy evidence get widely reported without the necessary scrutiny and consideration of a wider body of available evidence,’ Francois Balloux, a geneticist at University College London, said on Twitter.

He said that even if the virus was present in Italy in September, it doesn’t necessarily mean it originated there.

‘One strong line of evidence is that by far the closest virus we know to SARS-Cov-2 is circulating in bats in China. Moving the timeline, you could still have essentially the same origin in East Asia, and most likely China, which then would spread to other parts of the world,’ he told Reuters.

‘That would not change the narrative about the origin.’ 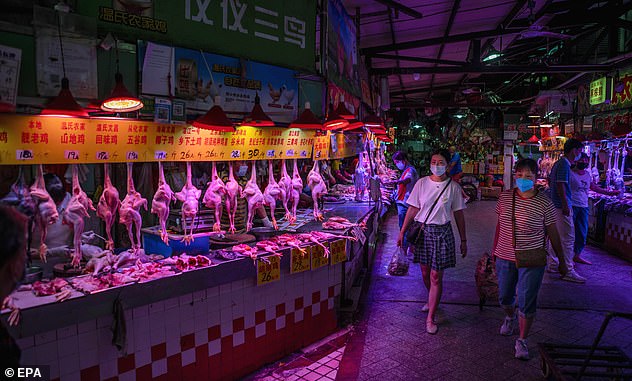 Michael Ryan, director of the health emergencies programme at the WHO, said last month that claims the virus did not originate in China are ‘highly speculative’.

‘It is clear from a public health perspective that you start your investigations where the human cases first emerged,’ he said at a news conference in Geneva.

But Peter Ben Embarek, WHO’s expert in animal diseases, appeared to open the door to other possible origins than Wuhan in remarks at a social media event in Geneva late last month.

He said it would be important to investigate whether the market workers had ‘some commonalities outside Wuhan, in some of the countryside or provinces or farming environments or hunting environments in southern China or perhaps even outside China?’

A WHO situation report in April stated that the outbreak resulted from a ‘single point introduction in the human population around the time that the virus was first reported in humans in Wuhan, China in December 2019.’ 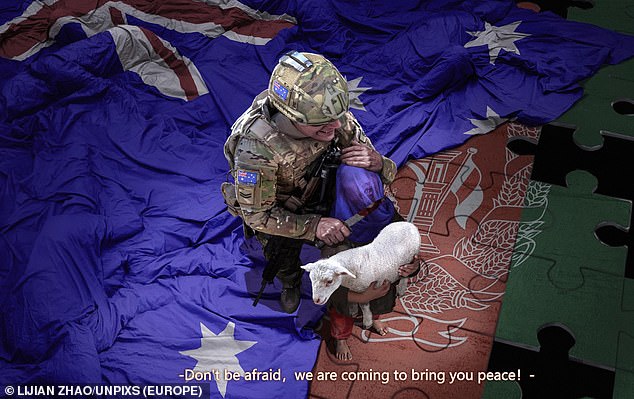 Mr Morrison called the mocked-up image ‘repugnant’ and demanded an apology – but Beijing refused and on Tuesday communist party newspaper The Global Times shared a new image by the same artist attacking the prime minister.

Last month Beijing had blocked Australian exports including coal and seafood before slapping a 212 per cent tariff on Aussie wine, effectively banning the product.

Beijing’s dossier of grievances, handed to Nine Newspapers by the Chinese Embassy in Canberra last month, claimed Australia was interfering with China’s affairs in Taiwan and Hong Kong and condemned Mr Morrison for seeking an independent investigation into the origins of Covid-19.

The prime minister was among the first world leaders to propose an investigation into the origins of coronavirus, which was identified in the Chinese city of Wuhan last year.

Among the other grievances was Australia’s decision to ban Chinese telecommunications firm Huawei from the country’s 5G network and blocking foreign investment bids by Chinese companies.