The Peking University project is aiming to create a ground-based telescope that spans 19.7 feet by 2024 – and that would expand to 26.2 feet by 2030. The undertaking is called the Expanding Aperture Segmented Telescope (EAST).

The EAST project would built a 19.7-foot mirror made of 18 hexagonal mirror segments for its first phase; the James Webb Space Telescope (JWST) has a hexagonal mirror that’s 21.6 feet across.

A statement from Peking University said the telescope will ‘greatly improve the observation capabilities of China’s optical astronomy.’

China wants to build the largest optical telescope in Asia that would rival America’s James Webb Space Telescope. Above: A diagram of the telescope released by Peking University

Most of the existing optical telescopes – managed by the U.S., Europe or Japan – are located in the Western Hemisphere – situated in Chile, Hawaii or off the coast of northwest Africa.

Unlike the JWST, which orbits 1 million miles away from Earth at the second Sun-Earth Lagrange point, the Chinese optical telescope would be built on Saishiteng Mountain near Lenghu Town in Qinghai Province on the Tibetan plateau at an altitude about 13,800 feet.

For the project’s second phase, another ring of 18 more hexagonal segments would be added, growing the diameter to 26.2 feet by 2030 – that size would make it a bit larger than the JWST.

Peking University is estimating the project’s cost at $69 to $84 million. A report from Qinghai News in November.

The EAST project is the latest example of China’s push to challenge American and Western dominance in space endeavors.

China completed construction in November on the world’s largest array of telescopes that will be pointed directly at the sun to study how its behavior impacts Earth.

The Daocheng Solar Radio Telescope (DSRT), located on a plateau in Sichuan province of southwest China, is composed of 313 dishes. Each one has a diameter of 19.7 feet and together they form a circle with a circumference of 1.95 miles.

The massive arrangement of scientific machinery, which cost $14 million, is set to study solar flares and coronal mass ejections (CME) – both of which can have a negative impact on electronics, power grids and satellites.

A CME is a huge cloud of electrically charged particles that gets heated to super-hot temperatures and then ejected with a burst of speed by the energy released in a solar flare. 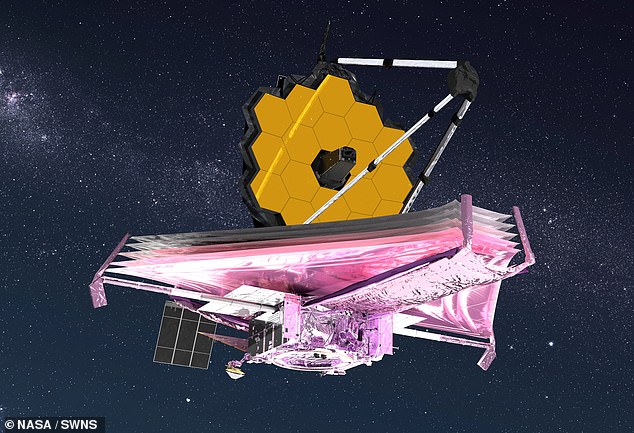 Unlike the JWST (above), which orbits 1 million miles away from Earth at the second Sun-Earth Lagrange point, the Chinese optical telescope would be built on Saishiteng Mountain near Lenghu Town in Qinghai Province

‘If it bursts toward the Earth and will reach us, we will be able to issue early warning to such a solar storm. In this way, we can provide space environment forecasts for normal operation of satellites in space and power grids on ground,’ told CCTV+, per Space.com.

In a Chinese journal article on possible landing sites authored by Chang’e-4 lunar mission commander Zhang He and others, 10 spots are mentioned. Artemis 3 and Chang’e-7 both identify sites near Shackleton, Haworth and Nobile craters as potential landing zones.

NASA called on China to remain ‘open and transparent’ with its lunar missions following the revelations.