A Chinese expert has warned that the novel coronavirus will stay with human beings for a long time.

Prof Feng Lushao, a researcher from the Chinese Center for Disease Control and Prevention, told state media that COVID-19 ‘will co-exist with us for a relatively long time in the future’.

He called on Chinese people to change their lifestyles to suit a new normality, which involves regular virus control.

A researcher from the Chinese Center for Disease Control and Prevention told state media that COVID-19 ‘will co-exist with us for a relatively long time in the future’. Chinese commuters wearing protective masks are pictured lining up in a crowd to catch a bus in Beijing on May 18

Prof Feng told Xinhua News Agency that the control and prevention of COVID-19 had become ‘a norm’ in China.

He stressed that the future of the pandemic was unclear, adding there were still ‘some uncertain elements’ in the health crisis.

He urged citizens not to let their guard down against the killer bug and change their lifestyles to suit the new normality.

Prof Feng’s remarks echoed a Shanghai-based doctor, who called on people to get used to seeing sporadic COVID-19 cases. 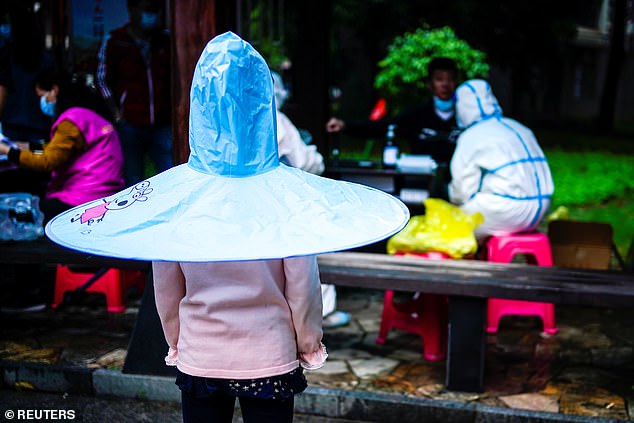 The expert called on Chinese people to change their lifestyles to suit a new normality, which involves regular virus control. A child wearing a head cover in the rain is pictured standing at a COVID-19 mass-testing site in Wuhan on May 14. The city is aiming to test every single resident

Dr Zhang Wenhong, who has been advising on the financial hub’s virus prevention works, said that occasional infections would continue to appear, especially after the resumption of international travels.

Dr Zhang made the comments through his social media account after Shanghai, a megacity of more than 22million people, registered two new native cases in two consecutive days.

Both patients had recently travelled to the city from elsewhere in China and were ‘silent carriers’, Dr Zhang said.

‘Silent carriers’, or asymptomatic carriers, are people who have COVID-19 but don’t show any symptoms. They still can transmit the infection to others.

Prof Feng and Dr Zhang’s warnings come as Chinese officials step up their efforts in preventing a second wave of infections. 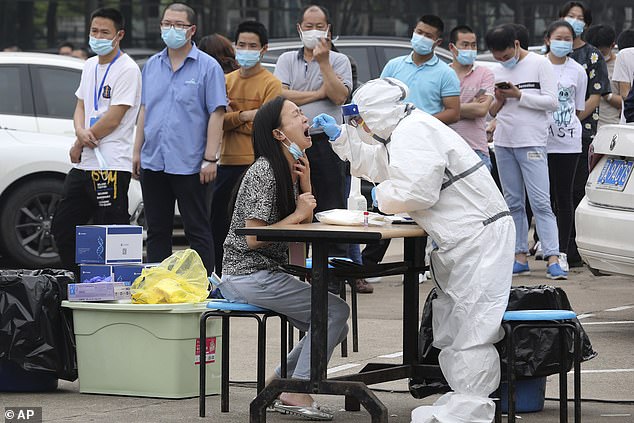 Fears are growing that China could be hit by a second wave of infections after new clusters appeared in Wuhan and Jilin Province in the north-east. Pictured, workers line up for medical inspectors to take swabs for the coronavirus test at a large factory in Wuhan on May 15

Two cities in the province of Jilin recently went into Wuhan-style lockdown after a local cluster involving at least 40 confirmed cases continued to spread and threatened neighbouring areas.

The contagious chain began in Shulan, a city of around 700,000 people, before spreading to the city of Jilin, home to some 4.5 million.

All the infections are believed to have all linked to the same source. But officials are still unravelling how the first patient, a 45-year-old laundry worker, contracted the killer bug.

Authorities from Shulan said that they ‘will severely punish’ the residents who flaunt quarantine rules after locking down the city on May 10.

The city of Jilin also sealed off one of its districts this week after changing the area’s emergency level to ‘high-risk’. 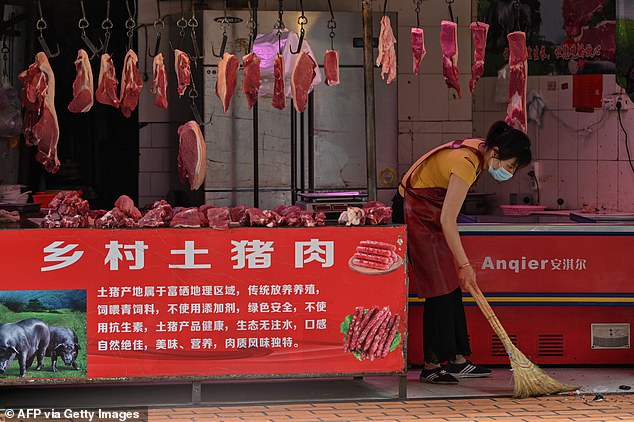 According to the Chinese authority, the virus has killed 4,634 people and sickened 82,967

Elsewhere in China, officials of ex-ground zero Wuhan have started to test every resident for COVID-19 after a cluster appeared earlier this month, stoking concerns of a resurgence of the disease.

The Chinese National Health Commission today reported two new cases, including one imported case in Guangdong and one local infection in Shanghai.

Globally, more than 328,000 people have lost their lives, and over five million have fallen ill in the pandemic.