This is the shocking moment a waitress gets slapped and beaten at by a group of disgruntled diners in southern China.

The diners, about six or seven, were complaining that their food had arrived too slowly at their table. One man can be seen slapping the waitress in the face.

The 48-year-old waitress did not sustain any severe injuries. The local policeman are carrying out further investigation.

Surveillance camera footage shows the waitress, in red uniform, explaining to a male diner; however, the angry man slapped her in the face and caused a chaos in the restaurant.

Beijing News reported that the incident happened in Tianxiake Chinese Restaurant in Hengyang, Hunan Province at 7:42pm on February 25.

One female diner grabs the waitress’s hair and beats her in the head, video shows.

Ms Li, the manager of the restaurant explained that her worker was telling the diner to be patient while the dishes were being prepared. 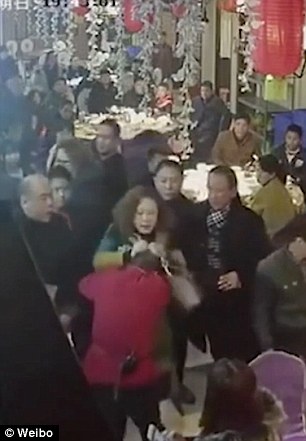 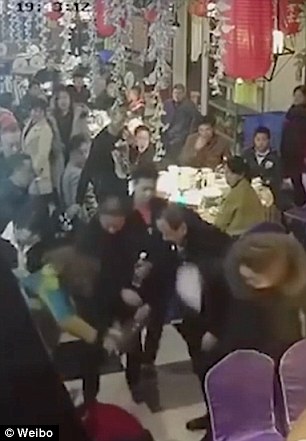 They suddenly slap the waitress in the face and grab her by the hair (left). Some can be seen throwing cups and plates at her during the quarrel (right) 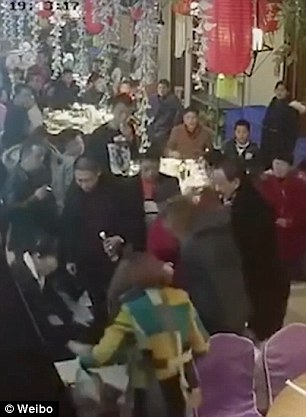 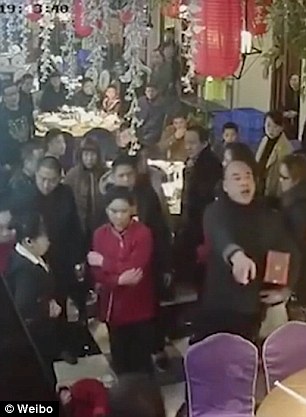 The 48-year-old waitress is not severely injured but is sent to a hospital for checkup (left). One of the diners, surnamed Zhang, is identified and the police is still looking for the others (right)

‘The diners were angry and complained that they had been waiting for a long time. One man was telling another group of diners that the dishes were too expensive,’ she mentioned.

A few other women were throwing cups and dishes at the worker.

According to Ms Li, the waitress has been working in the restaurant for two years and has been doing a good job at her role.

The unnamed waitress was being taken to a hospital for treatment. The restaurant manager had contacted Hengyang Police to help tracking down the outraged diners.

The restaurant owner told the injured waitress’s family that one of the attackers, surnamed Zhang, was found and passed onto the police for further investigation.