Chinese Human rights campaigner Hu Jia was reunited with his family after serving three-and-a-half-years in jail on subversion charges.

But activists across the globe fear the 37-year-old could face strict human rights controls and Mr Hu has made no public comment since his release on Sunday.

Mr Hu, 37, was convicted in 2008 for ‘inciting subversion of state power’ for criticising human rights restrictions in China, and was seen by some supporters as a potential recipient of the Nobel Peace Prize before it went to another jailed Chinese dissident, Liu Xiaobo, last year.

‘He is back home with his parents and me,’ his wife, Zeng Jinyan, told reporters in a brief telephone interview.

‘I don’t know if he can speak later. At the moment, I want everything to be peaceful. I’m worried that doing interviews at this stage might cause problems.’

Hu’s long-scheduled release followed this week’s abrupt freeing from detention of the prominent artist and activist Ai Weiwei, and has come while Chinese Premier Wen Jiabao is visiting Europe including Britain.

Hu’s wife, Zeng, and other advocates have voiced concern that Chinese authorities might also impose restrictions on him amounting to house arrest after his formal release.

Zeng, a prominent activist in her own right, told reporters in late May that she was worried by the trend of rights activists coming under informal house arrest after their release from formal detention or jail. 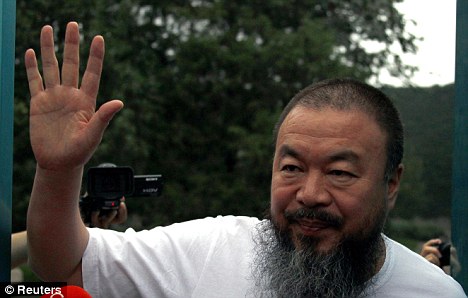 Freed: Chinese artist and activist Ai Weiwei has also been freed but it is feared his bail conditions under conditions are likely to keep the outspoken critic of Communist Party controls silent for now

‘A sleepless night and Jia came home at 2:30. Peaceful. Very happy. Needs a period of time to recuperate,’ Zeng, an activist herself, wrote in her latest Twitter entry in Chinese.

Most Chinese people do not read Twitter as the government blocks with a censorship firewall.

China often uses the broad charge of ‘inciting subversion’ to punish dissidents, and when Mr Hu was convicted, state media said that he had bowed to the accusations against him.

Before he was jailed, Mr Hu pursued an energetic career as an environmental protection campaigner, advocate for rural victims of AIDS, and vocal critic of China’s restrictions on political dissent. 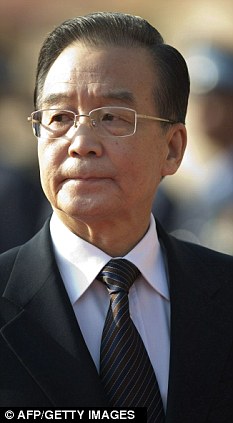 Shaven-headed and wearing bookish spectacles, he was a familiar sight at activist gatherings in Beijing.

Like other dissidents released recently from jail, Mr Hu might be kept under some sort of continued detention in his home, although such restrictions are illegal in China.

In a posting last week, Zeng said that upon his release, Mr Hu, who suffers from a liver ailment, would be deprived of his political rights for one year and will not be able to speak to the media.

‘For this one year, the focus should be on treating his cirrhosis, caring for parents and child, to avoid being arrested again,’ she wrote.

Mr Hu was honored in Strasbourg, France, where because he was in prison, his name was placed in front of an empty seat.

In recent months, hundreds of lawyers, activists and other intellectuals have been questioned, detained, confined to their homes or simply disappeared in the wake of online appeals calling for peaceful protests across the country similar to those in the Arab world.

Though no protests took place, the calls spooked the Chinese government into launching the clampdown.

There are concerns that extra-judicial tactics will be used against Mr Hu, including illegally detaining him, said Human Rights Watch senior Asia researcher Nicholas Bequelin.

‘Of course we are happy to have him be released, the problem is that we are not sure he is going to be released to freedom, but rather that he is going be again under some form of limitations to freedom, such as house arrest or monitoring and harassment by the authorities,’ Bequelin said before Hu’s release.

Another activist, Chen Guangcheng, and his wife have been kept under an unofficial house arrest in their village in eastern China since he was released from jail last fall, and reporters trying to visit them have been kept away by thugs who patrol the village.

Chen angered authorities after documenting forced late-term abortions and sterilizations and other abuses in his rural community, but was sentenced for instigating an attack on government offices and organizing a group of people to disrupt traffic, charges his supporters say were fabricated.