Chinese martial artists take the bull by the horns

Chinese martial artists take the bull by the horns

Bull wrestling has come under fire from critics in China who say it constitutes animal cruelty.

When 21-year-old Chinese martial artist Li Zhen first stepped into the ring to wrestle an adult bull he was naturally intimidated.

He risked having a leg snapped under the animal’s weight, being gored, or trampled.

But Li’s training got him over those fears and he is now one of a group of Wushu, or kung fu, athletes who train in bull wrestling at the Haihua Martial Arts Centre, about 100 kilometres (62 miles) southwest of Shanghai.

A traditional sport of China’s Muslim Hui ethnic minority, the practice has come under fire from critics in China who say it constitutes animal cruelty.

“Our bull wrestling is not bloody or cruel,” the burly 65-year-old said, comparing it favourably to Spanish bullfighting’s ritualised killing of the animals.

The docile creatures are led to the centre of a faux Roman amphitheatre where performances are put on for Chinese tourists. 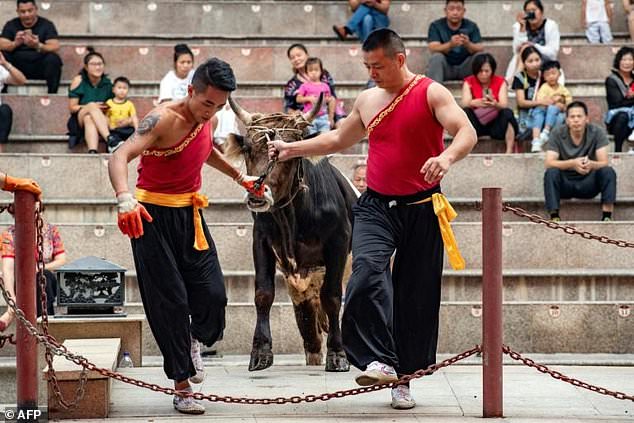 Bulls are led to the centre of a faux Roman amphitheatre where performances are put on for Chinese tourists.

A muscular martial artist riles up the animal by pushing its head from side to side before handing it over to the challenger.

“We use our deep knowledge of Wushu and its techniques to throw the bull down without hurting it,” said Han.

In matches, points are scored by forcing the bulls off-balance and pushing them to the ground.

“The difficult thing about it is that people and bulls are not the same weight,” said Li Bo, a hefty 23-year-old from China’s eastern province of Anhui.

“Once you get to know them they are actually quite gentle and well-behaved,” he added.

The years of hard martial arts training become clear as the young men grapple with the bulls by their horns, muscles popping as they strain against the powerful bovines’ necks while deftly avoiding being stomped in a kind of drunken dance. Bull wrestlers risk having a leg snapped under the animal’s weight, being gored, or trampled.

The bulls appear at times disinterested, perplexed, or annoyed as they tumble over clumsily, shrug off their attackers or dash for the nearest exit.

His ultimate hope is for the sport to break into the Olympics.

“Bull wrestling reflects a person’s wisdom and technique, and of course promotes strength and tests courage. It would be great if it could be an Olympic sport,” he said.