China is ‘aggressively’ developing next generation doomsday nuclear weapons to get ahead in its arms race with the US and Russia.

The country’s scientists are conducting five times as many nuclear weapons experiments a year as US experts, according to a major Chinese weapons laboratory.

Experts warned that while China, the US and Russia hope their nuclear weapons programmes will act as a deterrent against potential threats, the escalating arms race is more likely to increase the chances of a doomsday conflict.

China is ‘aggressively’ developing next generation doomsday nuclear weapons to get ahead in its arms race with the US and Russia. Pictured is a still of the US Castle Union nuclear bomb test in 1954

In a new report from the China Academy of Engineering Physics, scientists revealed that Chinese researchers carried out 200 laboratory experiments between September 2014 and December 2018.

On average, its national laboratories performed these experiments – designed to simulate the complex physics of a nuclear blast – around 50 times per year.

For comparison, US scientists carried out 50 such tests between 2012 and 2017, an average of 10 a year, according to the Lawrence Livermore National Laboratory.

US, Chinese and Russian weapons researchers are racing to build smaller nuclear warheads that allow for strikes on more precise targets.

But experts said the creation of more direct nuclear missiles may remove the inhibition to use them.

‘The use of small warheads will lead to the use of bigger ones,’ Beijing-based naval expert Li Jie told the South China Morning Post. 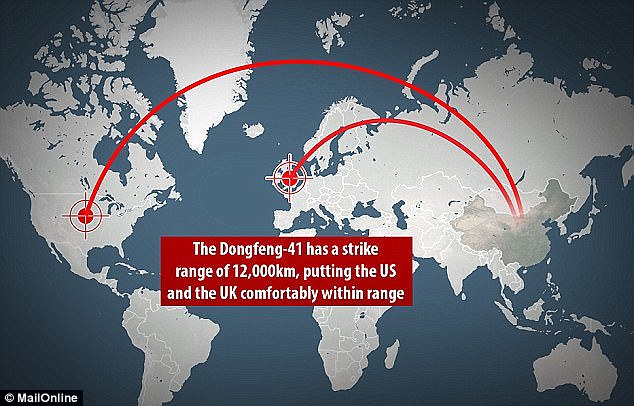 China’s Dongfeng-41 intercontinental ballistic missiles have a range of 7,500 miles (12,000km) – long enough to hit the UK and the United States. The weapons are expected to enter China’s arsenal later this year

He added that although China is unlikely to use these weapons it needed to develop them to keep up with Russian and US programmes.

‘If other countries use nuclear weapons on us, we have to retaliate. This is probably why there is research to develop new weapons.’

With an international ban now preventing real tests of nuclear weapons, most countries conduct advanced simulations to study the capabilities of their devices.

During the experiments high-powered gas guns fire projectiles into weapons-grade materials in a laboratory. 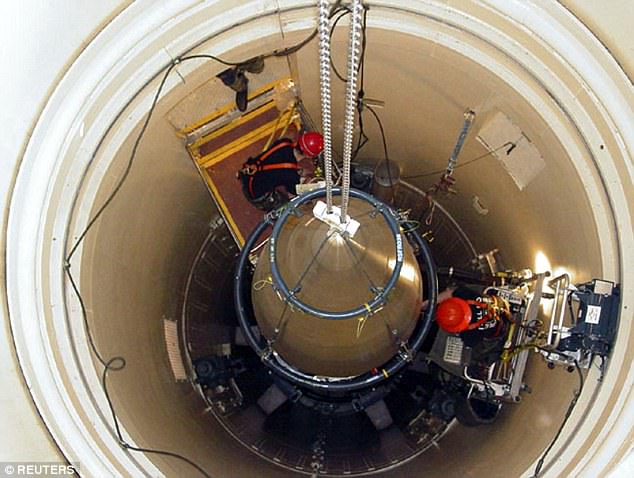 The country’s scientists are conducting five times more nuclear weapons simulations a year than US experts, according to a major Chinese weapons research institutes. Pictured are US engineers working on a nuclear warhead within an ICBM in 2014

Each blast simulated the extreme heat, pressure and shock waves produced in a real nuclear blast but on a far smaller scale.

Scientists then study the effects of the impact and scale them up to better understand the impacts of nuclear missiles and other weapons technology.

WHAT IS THE IMPACT OF A NUCLEAR BOMB?

The impact of a single nuclear bomb depends on many factors like the weather, weapon design, geographical layout of where the bomb hits and if it explodes in the air or on the ground.

About 35 per cent of the bomb’s energy would be released in heat.

Those closer by would experience burns, with third degree burns affecting those within a 5 mile radius.

Most of the bomb’s energy is felt in the blast, in a sudden change of air pressure that can crush buildings, which would likely kill anyone when they fell.

Winds up to 158 mph  would affect people up to 3.7 miles away, causing dangerous objects to fly around.

Though China is ahead with its gas-gun experiments, the US likely still has the upper hand in the arms race, according to one weapons expert.

The US detonated more than 1,000 nuclear warheads between 1945 and 1996, when the UN’s Comprehensive Nuclear-Test-Ban Treaty was signed.

China conducted 45 such tests starting from 1964, leaving it long a way behind the US in live detonation experiments.

Professor Wang Chuanbin, from the State Key Laboratory of Advanced Technology for Materials Synthesis and Processing at the Wuhan University of Technology, told the SCMP: ‘It is possible we are in a hurry to catch up’.