A Chinese tourist accused of carrying out a cosmetic procedure that left a woman in a critical condition in hospital had been in the country less than a week and had a ticket to fly out today.

Jie Shao, 33, appeared in Central Local Court charged with recklessly inflicting bodily harm and using a poison so as to endanger life. Each offence carries a penalty of 10 years in prison.

The court heard Shao had admitted administering an anaesthetic despite not being a licensed medical practitioner in Australia.

‘It is clear that she was working at a cosmetic surgery where these sort of treatments were carried out,’ the police prosecutor said.

Paramedics rushed to the Medi Beauty Group in Chippendale at 3.30pm on Wednesday following reports of a medical episode.

A 35-year-old woman was in cardiac arrest and taken to Royal Prince Alfred Hospital in a critical condition, a NSW Police spokesman told Daily Mail Australia.

Police had fears Shao would continue to practise such cosmetic procedures if granted bail.

Shao had been in Australia only four or five days, had been staying at a Mercure Hotel and was booked on a flight home to China today.

It was unclear when that flight was booked, the court heard.

The prosecutor said Shao’s alleged victim was still in a critical condition and had not regained consciousness. 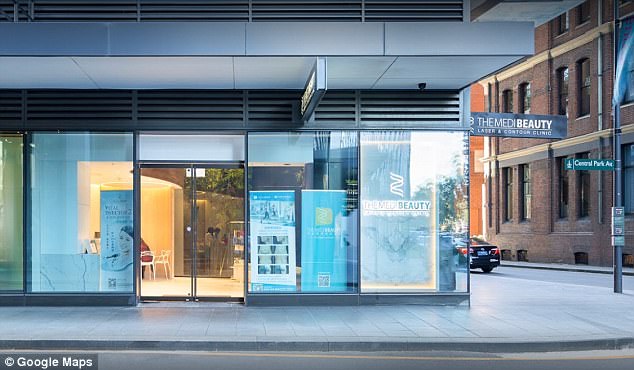 The skincare clinic, which only opened recently in the Central Park Mall, specialises in laser and contour treatment and ‘injectable forms of beauty therapy’

‘If she does not survive, there will be more serious charges laid,’ he said.

There was a risk Shao would interfere with witnesses – a number of whom had yet to be identified – if granted bail.

Solicitor Mary Underwood said Shao had studied at the Canton Medical University for five years, was a specialist in dermatology, and had completed a Masters in Health Sciences in Great Britain in 2010.

Shao had spoken briefly with her husband in China after her arrest.

The prosecutor said Shao was an unacceptable flight risk and an endangerment to the community.

The case against her was ‘strong’.

She had limited ties in Australia and it would be ‘difficult if not impossible’ to impose suitable bail conditions.

Shao showed no emotion as she appeared via video link from Surry Hills police station.

Ms Underwood said her client had two passports, one of which was in her handbag at the clinic, the other at the Mercure Hotel.

If granted bail Shao would not engage in beauty treatment, not approach employees of the clinic and not apply for further travel documents

A decision on bail would be made later on Thursday.