A Chinese woman who reportedly looked pregnant with triplets had a 77lb (35kg) tumour removed from her ovary.

Ms Huang, whose first name is not known, had been struggling to breathe because of the huge mass, local media reports.

The 59-year-old was reluctant to go to hospital when the mass began to grow – but in the end she had little choice but to seek help.

The liquid-filled growth, called a benign ovarian mucinous cystadenoma, took over her whole abdominal cavity. It blocked her organs, including the liver, spleen and kidneys, on medical scans.

She was treated at the Second Affiliated Hospital of Harbin Medical University in Heilongjiang, north east China.

Surgeons removed 33 litres of mucinous fluid, which is thick and brown but not harmful, from Ms Huan’s ovarian tumour. They also cut out a sac weighing 4.4lbs (2kg), totalling the weight to 77lb. 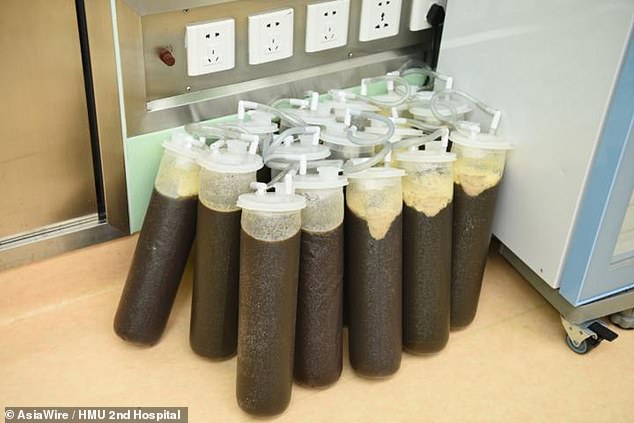 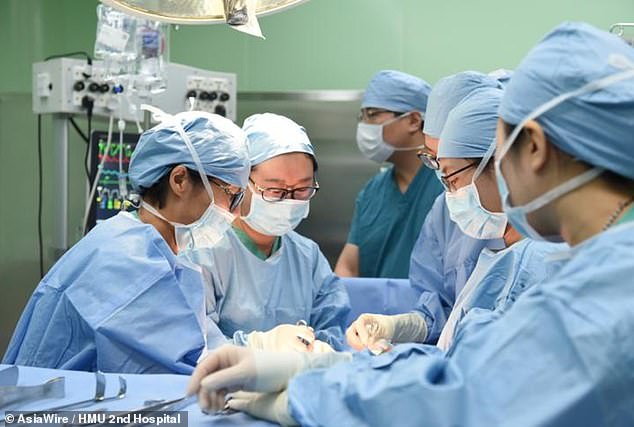 Professor Li Peiling, one of the doctors at the hospital, said she had never seen a tumour like Ms Huang’s in her 38-year career. Pictured, surgeons operating

Professor Li Peiling, of the hospital’s obstetrics and gynaecology department, said: ‘I’ve been a doctor for 38 years, and I’ve seen many large tumours, but I’d never seen one like this before.

‘Scans showed a giant growth occupying her entire pelvic cavity. Her other organs – liver, gallbladder, spleen, kidneys – none could be seen.

‘She was as thin as a stick, but her belly was very big, as if she were pregnant with twins or triplets.’

Ms Huang, from the city of Shuangyashan in Heilongjiang, said: ‘I couldn’t lie flat to sleep. I had to sit up with a pillow behind my back.’

According to her daughter, the tumour was allowed to grow because her mother refused to seek medical attention when they first noticed her stomach beginning to swell.

She said: ‘At first her belly bulged a bit, but she said it was just air and didn’t want to go to a hospital. 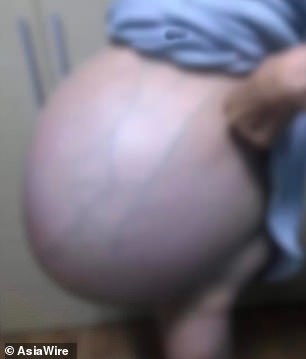 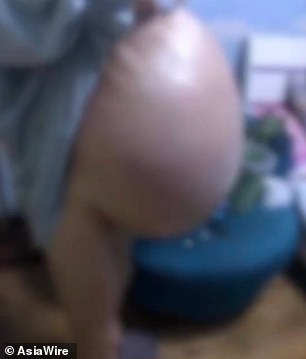 Ms Huang’s daughter said the tumour was allowed to grow because her mother refused to seek medical attention. In the end, she was struggling to breathe 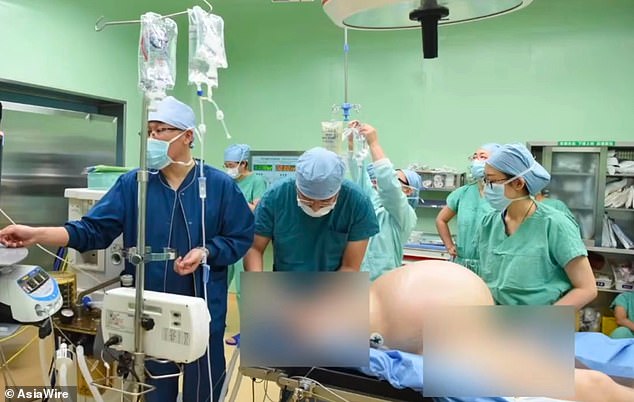 The operation took 90 minutes. Ms Huang is pictured on the operating table 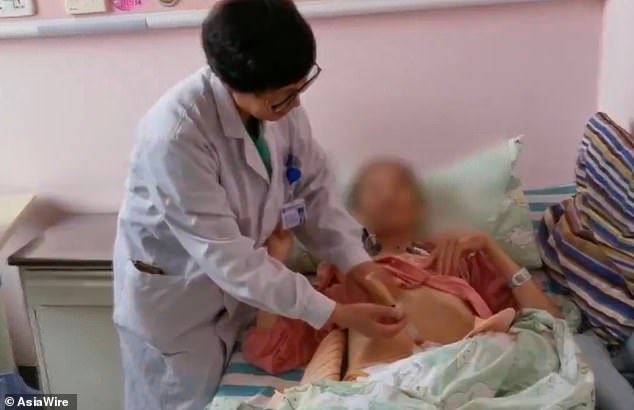 WHAT WAS THE TUMOUR?

The tumour was filled almost entirely with liquid, known as a benign ovarian mucinous cystadenoma.

It grows from the surface epithelium of the ovary. Epithelial tissues line the outer or inner surfaces of organs and blood vessels throughout the body.

Of all ovarian tumours, mucinous tumours comprise 15 per cent, according to medical literature.

About 80 per cent of mucinous tumours are benign, while 20 per cent are cancerous or potentially.

They most commonly occur between the age of 30 and 50.

The most frequent complications of benign ovarian cysts, in general, are torsion, severe bleeding and rupture.

Giant ovarian tumours are rare as most cases are discovered early during routine check-ups.

However, they are often discovered only when they begin pressing on nearby organs, causing discomfort.

‘She only agreed to go after she started having trouble breathing.’

When family members took Ms Huang to hospital they refused to treat her ‘bursting’ belly. It is unclear why.

They eventually were seen by Professor Li and colleagues who were stunned by initial scans.

Professor Li and her colleague Jiang Jing spent 90 minutes operating on Ms Huang, taking some 33 litres of fluids from her ovarian tumour.

The encompassing sac, weighing 4.4lbs, was then surgically removed from her abdomen.

According to the hospital, Ms Huang spent 24 hours in intensive care before being transferred to the general ward. She is continuing her recovery at the facility.

Professor Li said ovarian tumours are the most common form of benign tumours found in women, but they can also become malignant.

She noted that ovarian tumours can affect women of all age groups, but the growths are not always obvious at first, and are often discovered when they begin pressing against nearby organs and cause discomfort.