Tearful listeners bid farewell to Chris Evans this morning as he hosted his last ever Radio 2 breakfast show after 13 years at the BBC station.

The DJ, 52, who is returning to Virgin almost 20 years after he left, was joined by his family for his final show in which he struggled to contain his emotion.

Fans inundated Twitter during the broadcast saying how ‘mornings will never be the same again’ and thanked him for his ‘beautiful and emotional goodbye.’

The former Top Gear host was also joined by Nicole Kidman, who rang into the show – and was kept on hold for 15 minutes.

Later as he left Wogan House he said he was looking forward to having a lie-in before he starts his new job.

He said: ‘I get 28 days off, then I’m back at the coalface,’ he said, as he stood outside Wogan House while wearing pyjamas emblazoned with Brussels sprouts.

‘I feel sad and very happy and very excited.’

One fan wrote on Twitter: Chris Evans you have brightened up our mornings all these years. We love you in out house and will miss you at Radio 2.

Another said: Heard Chris Evans’ farewell speech this morning. GUTTED!! Honestly don’t know it I will get over it or how I will cope. There’s no one like him. Farewell you heartbreaker.’

And one fan added: ‘So sad that today is @chrisevens last show. Mornings will never be the same again. Beautiful and emotional goodbye. Good luck for your new adventure.’

After the show Evans said he was not feeling nervous about returning to Virgin almost 20 years after he was sacked for not showing up for work.

It will not be the last that the star sees of the BBC, as the DJ has signed up for what he called ‘Strictly Come Dancing, baby! ‘

Evans has already been tipped as a winner of the show, but the broadcaster, who is being replaced by Zoe Ball on Radio 2, downplayed his chances, saying: ‘I’m sure that’s not going to happen.’ 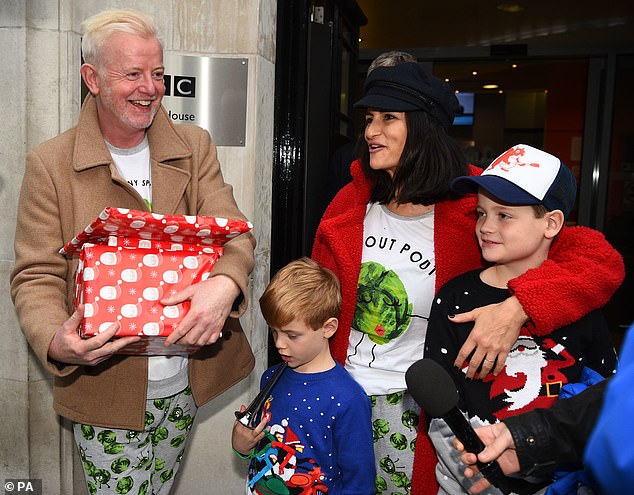 Chris Evans leaves Wogan House in London, with his wife, Natasha, and sons Noah (right) and Eli, after presenting his final BBC Radio 2 breakfast show, which he has presented since 2010

He said that when deciding to leave the BBC, where he was earning at least £1.6 million, he thought about the words of his predecessor, the ‘great man ‘ Sir Terry Wogan.

Sir Terry had said ‘there may not ever be a right time to go but there could be a wrong time to stay,’ Evans said.

Evans, wearing pyjamas hailed his wife Natasha Shishmanian ‘my gravity, my compass, my guiding light’ in a heartfelt speech.

Evans thanked her for giving him ‘enough certainty and security’ to leave the BBC after 13 years. 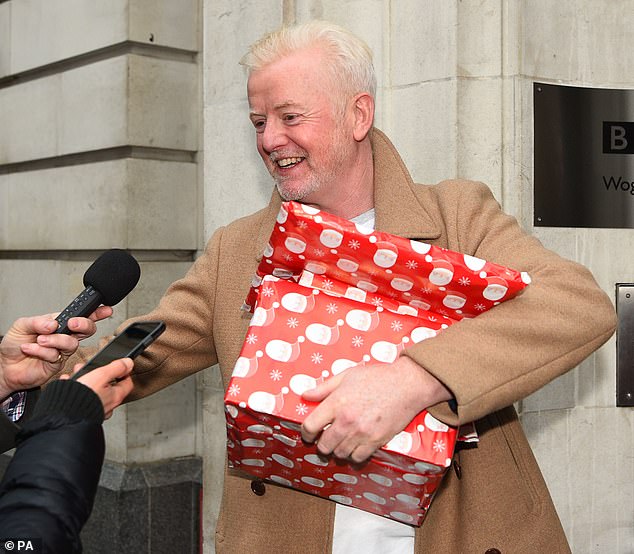 He said: ‘Thank you to my family for putting up with me, and for having someone in your personal orbit that does a job like this, particularly my daughter Jane.

‘Thank you to you all for listening but most of all I would like to thank my wife Natasha, my gravity and my guiding light, for giving me enough certainty to feel confident enough to embark upon a bit of uncertainty again.

‘It is what I like. I crave the uncertainty but you can only do that against a backdrop of certainty and security.

‘Uncertainty is where creativity lives. Comfort and creativity are not the great bedfellows, let me tell you.

‘None of us look forward to saying goodbye to the things and people we love. Why would we want it any other way.’ 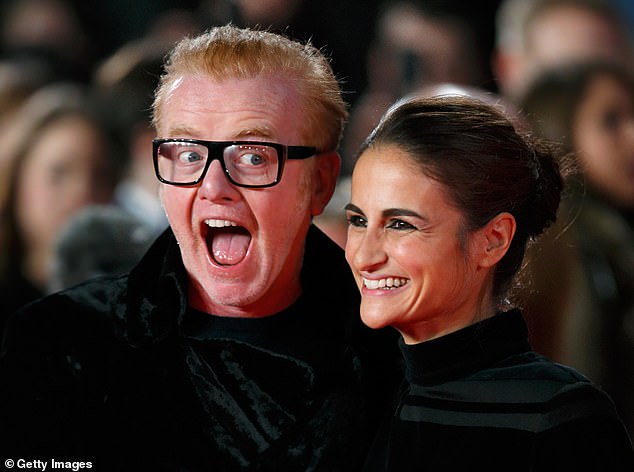 Evans and wife Natasha Shishmanian pictured together in October 2015. Today the broadcaster called her ‘my gravity, my compass, my guiding light’

He wrapped up the speech with Amazing Grace.

Evans and his wife recently welcomed twins Walt and Boo in September. They also have sons Noah, nine, and Eli, six.

The former Top Gear host, said of today’s show and if he would be shedding more tears: ‘It was great and the kind of show we wanted to do today, we wanted to leave them laughing and not crying because there’s been a lot of tears throughout the show, hopefully always for the right reasons but enough now.

Hollywood actress Nicole Kidman called into the show to request a song from him as a surprise.

Evans kept her on hold for a few minutes but said afterwards: ‘I thought we had someone on the phone who was requesting a record, which is fine because they called in to request one, what I didn’t know is that the team had called Nicole Kidman and she was hanging on the phone for 14 mins from a beach in Australia. Apparently she loved it, which is good!’ 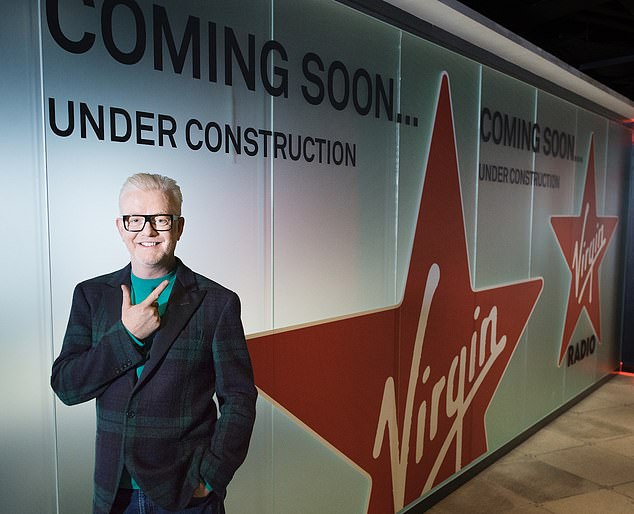 Later reduced his wife to tears, who was a guest in the studio, asking her to read out a message he had written from the perspective of their children.

She said: ‘Today’s gobsmackers are chosen by Noah and Eli Evans for their mum Tash.’

She began to cry, saying: ‘Oh, for goodness sake.’

She continued: ‘They say that while everybody is talking about our dad we wanted to pick two songs for mum.

‘One is because she loves nothing more than to dance in the sunshine with a grapefruit G and T, laughing uncontrollably with the people she loves.

‘The other is her mascara moment, with Michael Jackson with Love Never Felt So Good. But first, Razorlight with America.’

Evans began the show by telling listeners: ‘It is sad. It’s a sad day today.

‘But it is also an exciting day for everyone. You’ve got to turn the pages sometimes. 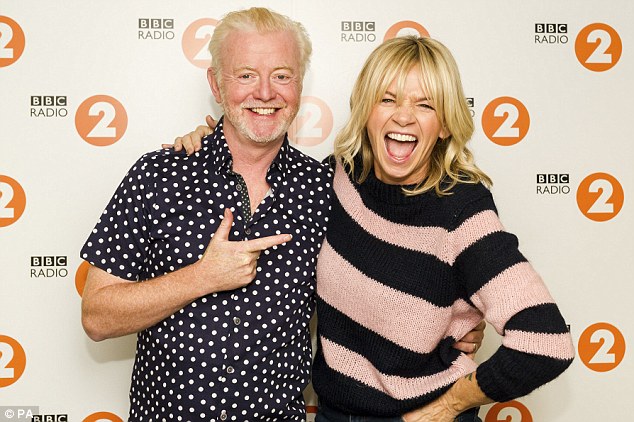 Chris Evans, with his replacement, Zoe Ball, who will take over hosting when Evans departs the show

‘If you wait for other people to turn them it might never happen, you know what I am saying?’

The Christmas Eve show was the former TFI Friday and Top Gear host’s last before he is replaced by Zoe Ball in the new year.

Replying to emails and text messages, Evans asked fans: ‘Please don’t shed too many tears during our final morning.’

He added: ‘This is your show. It’s a two-way street today. Truly, definitively. It is your input.’

Evans has been at BBC Radio 2 since 2005 and has had the breakfast slot since January 2010.

His Virgin Radio breakfast show will begin on January 21.

Evans said he was excited to be hosting his final BBC Radio 2 breakfast show on Christmas Eve.

He said: ‘It’s Christmas Eve. It’s so exciting, I’m so excited. Nine years. We thought it was eight. It was nine on the breakfast show.’

Evans explained that his team had created a yearbook of their favourite moments.

He said: ‘They’ve put together this lovely album of the special moments. Glastonbury in the mud, when we recorded from my house.

1990: He became a presenter at BBC London radio station GLR on the Saturday afternoon show.

1997: He quits the BBC Breakfast show

1997: He buys Virgin Radio and rejoins as breakfast show host

2000: He sells the station to Scottish Media Group

2001: Evans is sacked for failing to show up to work for six days

2010 The DJ replaces Sir Terry Wogan in the breakfast slot

2015: He takes over the helm of Top Gear, but quits after one series

Evans said he finally understood viewers’ sadness at his departure after listening to a selection of moments from the past year.

The clips featured recordings of Evans’ coverage of the wedding of Prince Harry and Meghan Markle, BBC Children in Need and the 2018 Winter Olympics in South Korea.

‘I mean, with the amount of brain cells I have, and after he left this mortal coil.’

The Reverend Kate Bottley also thanked Evans for featuring her on his breakfast show’s Pause for Thought section.

The former Gogglebox star said: ‘Four and a half years on since my first Pause for Thought, it’s been a blast, love and blessings to Chris Evans for the next bit of the adventure BBC Radio 2 go in peace.’

Evans held back sobs as he thanked his family and wife for supporting him during his broadcasting career.

‘Merry Christmas to you Tash and the monkeys @BBCRadio2’.

Evans then thanked the BBC for inviting him to return and play ‘that incredible music’ once again.

He said: ‘Thank you to the BBC for supporting me, and trusting me with one of their precious microphones for the last years, for allowing me to grow every minute of every day that I have been on air.

‘Live from Glastonbury, live from the beaches of northern France for the commemoration of the Normandy landings or having a blast in the middle of one of our regular Friday shows.

‘The mayhem there of the usually attendant nonsense that they involve. And yes, all that incredible music. Right here in Terry’s old studio. Studio 6C at Wogan House in London.’

It is only available on digital platforms.

Evans hosted Virgin Radio’s Breakfast Show from 1997 to 2001, when he was sacked for ‘breach of contract’.

He failed to turn up for work after several highly-publicised drinking sessions with his then wife Billie Piper.

In 2003, he lost his battle for multimillion-pound damages against the radio station where he was once the star.

Evans had claimed that Virgin Radio withheld £8.6 million of his share options after terminating his breakfast show contract.

Virgin Radio returned to the UK airwaves in March 2016.

It is owned by Wireless, which also comprises talkSPORT and talkRADIO as well as 30 local radio stations in the UK and Ireland.

Sir Richard Branson owns the intellectual property on the Virgin brand, which is licensed to Wireless.