Chris Hughes’s brother has revealed he may only have a 20 per cent chance of fathering a child after having his testicle removed due to cancer.

Back in 2018, Love Island star Chris, 27, underwent a testicular exam live on This Morning, prompting his brother Ben, 28, to check his testicles, and discover a lump which doctors later found to be cancerous.

Thankfully, Ben is now cancer free after having his testicle removed, but he will open up about the effect his illness has had on his fertility in a new BBC documentary Me, My Brother and Our Balls, which is set to air on Wednesday.

Appearing on the This Morning alongside Chris today, Ben says he was determined to include emotional scenes in the documentary, including one where he tells his girlfriend he may struggle to conceive, because he wants to ‘raise awareness’ of the consequences of testicular cancer.

Chris Hughes’s brother Ben (pictured left) has revealed he may only have a 20 per cent chance of conceiving, after having his testical removed due to cancer

The star won praise last year after he underwent a testicular examination live on This Morning.

He was keen to raise awareness of testicular cancer and other related issues and lowered his pants in order that Dr Chris Steele could show how an examination takes place.

Chris happily showed off a long scar on his own testicle as he spoke about his own shock health scare and telling Phillip Schofield and Rochelle Humes about what his male relatives went through.

Speaking about that live exam on This Morning today, Chris said: ‘I didn’t think it would ever go as widespread as it did. 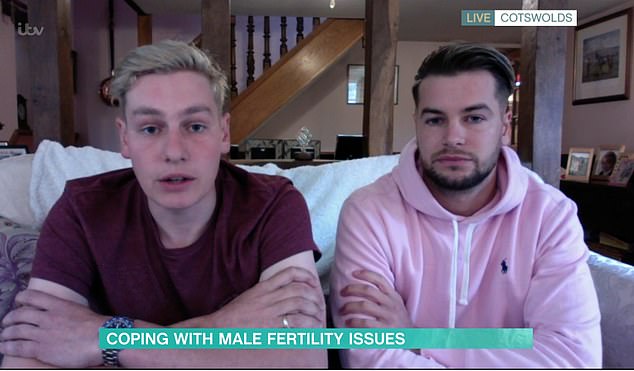 ‘I wanted to do it initially as my cousin had testicular cancer, which became secondary in his abdomen.

‘For him, he missed it initially. And I’ve had obviously operations on my testicles, which plays out within the documentary, but the way it was received was quite astonishing.

‘It’s just been a really positive thing and it’s helped a lot of people along the way, and we can’t complain about that.’ 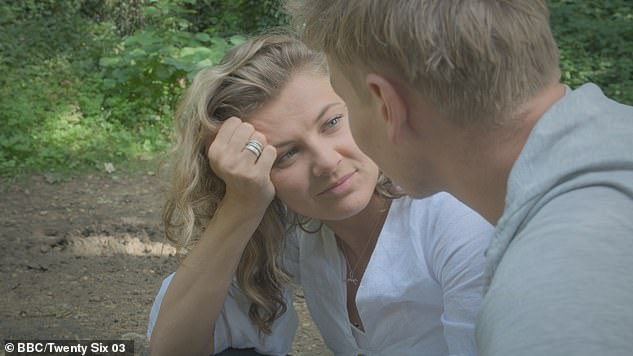 During the documentary, titled Me, My Brother and our Balls, Ben shares an intimate moment with the nation when he tells his girlfriend that there might only be a 20 per cent chance that his sperm can produce a child

On saving his brother’s life, Chris continued: ‘It was quite overwhelming to begin with.

‘I was doing it to raise awareness, that’s what I wanted to do, but I didn’t think it would be such a crazy story that Ben, someone who is so close to me, it saved his life.’

During the documentary,  Ben shares an intimate moment with the nation when he tells his girlfriend that there might only be a 20 per cent chance that his sperm can produce a child.

Speaking of why he chose to share this, Ben explained: ‘It was really just to try and raise awareness, not just for testicular cancer but what could possibly lead on afterwards.

What is testicular cancer?

Cancer of the testicle is 1 of the less common cancers, and tends to mostly affect men between 15 and 49 years of age.

The testicles are the 2 oval-shaped male sex organs that sit inside the scrotum on either side of the penis.

The testicles are an important part of the male reproductive system because they produce sperm and the hormone testosterone, which plays a major role in male sexual development.

The different types of testicular cancer are classified by the type of cells the cancer begins in.

There are 2 main subtypes of germ cell testicular cancer. They are:

Both types tend to respond well to chemotherapy.

Testicular cancer is a relatively rare type of cancer, accounting for just 1% of all cancers that occur in men.

Around 2,300 men are diagnosed with testicular cancer each year in the UK.

Testicular cancer is unusual compared with other cancers because it tends to affect younger men.

‘I’ve seen some really good specialists over the last few months, just coming out of lockdown, and so my chances are now looking a lot better than they were. And I’m just really grateful for that.

‘I got referred to another specialist down in London. I’m now on a completely different medication to what I was initially, after sort of getting over cancer.

‘And that is now starting to take real good effect and we are starting to see the changes in how I feel and we’ve got more of a chance, and they’re telling me there’s not a percentage on this. It is looking positive, so that’s what we’re really happy about.’

Chris has struggled with his own fertility, explaining he suffers with a condition called varicocele, and has had three operations in an attempt to prevent it  hampering his fertility. 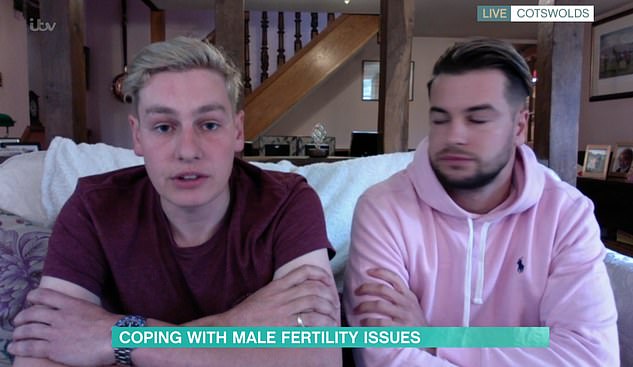 Chris has struggled with his own fertility, explaining he suffers with a condition called varicocele, and has had three operations in an attempt to prevent the varicocele hampering his fertility

‘It’s called a varicocele’, said Chris, ‘I’ve got that on my left testicle and I’ve got a hydrocele on my right one, but my varicocele was just quite a strong varicocele really.

‘It took three operations to deal with it. It’s like a build up of veins and it takes a lot of oxygen from the testical and it surrounds my left side.

‘They come from my kidneys, I’ve had them all coiled, like metal coils around the kidney in the most recent operation, and it just kills them off essentially because they can hamper your fertility. It is the main cause of male fertility as well.’

What is a varicocele?

Varicocele is the medical name for an abnormal network of veins in the scrotum around the testicle.

Varicoceles can be on the left or right side, or sometimes on both sides. Varicoceles are relatively common (affecting around 15 of every 100 men).

The direction of blood flow in the testicular vein should always be back towards the heart.

A series of one-way valves in the testicular vein prevent the reverse flow of blood back to the testicles.

Sometimes these valves are not present or fail for unclear reasons. This causes blood to pool in the veins around the testicle, forming a varicocele.

Varicoceles are most easily noted when standing, as gravity lets the abnormal veins fill up.

There is debate about whether varicoceles are associated with male infertility.