Ms Strachan giggled as she presented a segment on the mating strategies of seals, detailing the differences between Grey and Harbour seals.

But the BBC Two presenters left viewers shocked when, after explaining how seals had different sized penises, Strachan asked Packham: ‘which would you rather be?’

He replied: ‘Well I don’t think size matters actually at all, it’s what you do with it surely that counts, isn’t it?’

Earlier this week Packham left viewers shocked after he reminisced about how he ‘French kissed’ a fox when when he was a boy.

What animals have a penis bone and why do they have them?

Most mammals have a unique bone called a baculum – also know as a penis bone, penile bone or os penis – in their penis.

The only mammal species without baculum are humans, horses, donkeys, rhinoceros, marsupials, rabbits, cetaceans – the marine family that includes seals, whales and dolphins – elephants and hyenas.

Baculum are present in most primates, rodents and seals.

The penis bone is kept in the abdomen and, when needed, a set of muscles push it into a sheath in the fleshy part of the penis.

It enters within the erectile tissue, providing rigidness to aid during the copulation.

The penis bone varies in size and shape by species and its characteristics are sometimes used to differentiate between similar species.

The female equivalent is known as the baubellum or os clitoris, a bone in the clitoris.

The show featured a colony of grey seals on the Isle of May in the Firth of Forth, with night-vision cameras capturing exceptional film of mothers giving birth and protecting their babies from marauding males.

‘With Grey seals, it is a physical battle between the two males. So, for Grey seals size doesn’t matter.

‘Harbour seals, the bigger the better.

‘So, with that information in mind, Chris – which would you rather be?

‘Would you rather be a grey seal, where size doesn’t matter, or a harbour seal, where the bigger the better?’

Packham then replied, completely deadpan: ‘Well I don’t think size matters actually at all, it’s what you do with it surely that counts, isn’t it?

‘But sadly we’ve run out of time this evening.’

This comes after the host revealed he ‘French kissed’ his pet fox as a child.

The naturalist, 56, made the admission during a segment with his stepdaughter Megan McCubbin, 25, as they watched a fox drinking milk outside a house in Bristol.

‘At one point I had a pet fox when I was a kid and I used to tease it by putting food in my mouth,’ Packham revealed.

‘The fox would come up and every now and again it would put its tongue in my mouth and it would push it up underneath my lip.

‘And it’s not like a dog’s tongue when they slip their tongue in occasionally when they’re kissing you, this is a fox tongue you know.’

He joked: ‘Come on, being French kissed by a fox is a badge of honour.’ 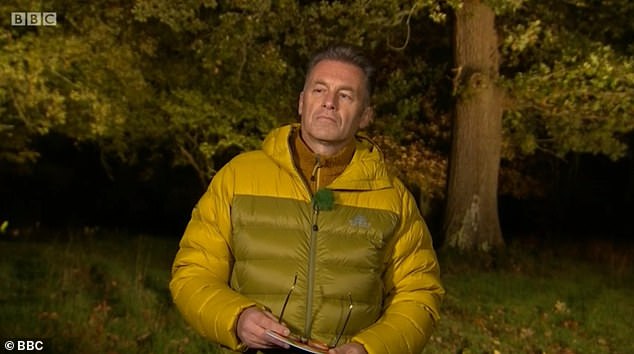 Packham then replied, completely deadpan: ‘Well I don’t think size matters actually at all, it’s what you do with it surely that counts, isn’t it?’

A clearly uncomfortable Ms McCubbin said: ‘It’s a badge of honour for you but Chris there are some things you should keep to yourself.’

Another wrote: ‘Chris Packham talking about being French kissed by a fox is not something I expected to see tonight. #Autumnwatch.’

Packham later posted a black and white picture of him kissing the nocturnal animal when he was younger, telling critics he’s still here despite their concerns.

‘Im sure people could find a million reasons to indicate that “french kissing” a fox was a very bad idea,’ he said.

‘But I’m still here and I love these animals more than most others,and most days work hard to protect them and encourage others to respect them. Whatever it takes eh ?’

He also jokingly revealed that he has ‘done wolf too’.