The Colorado dad serving three life sentences for the murders of his pregnant wife and their two daughters has denied claims that he engaged in homosexual activities with another man.

Chris Watts dismissed the claims made by Trent Bolte, who told investigators he and the then-married Colorado killer were in a sexual relationship for close to a year.

At the same time, it was also revealed that a second man had claimed he too had a sexual relationship with Watts after the two met in rehab.

Watts denied that affair as well to investigators.

The investigators spoke about Bolte and another woman, Amanda McMahon, before asking Watts about his mistress Nichol Kessinger during their interview last month in a Wisconsin prison.

Watts also denied ever meeting McMahon for sex, saying he only cheated on his wife with Kessinger.

Watts strangled his pregnant wife Shanann Watts in their bed before driving her body and their two daughters – 4-year-old Bella and 3-year-old Celeste – to a worksite where he smothered the girls with a blanket. 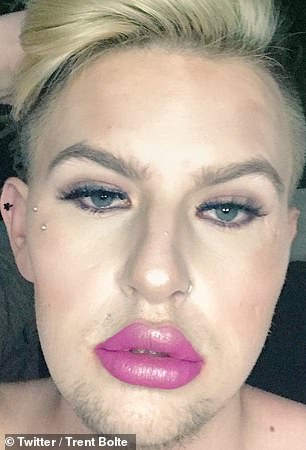 Plump up the jam: Chris Watts (left last month in his Wisconsin prison) addressed the rumors that he had been having affairs with men (Trent Bolte on right) and women in his prison confession last month

Response: ‘I didn’t know he was gonna murder his family when I was with him,’ said Bolte earlier this month, prior to Watts’ denial (above)

‘[Watts’ lawyer] John Walsh had told me about one dude from Wyoming,’ said Watts when asked about possible affairs.

‘Yeah, that guy,’ said Watts, before everyone began laughing and one of the officials said that the interview with Bolte had been a ‘waste of our lives.’

That official then explained however that no one was trying to ‘jam up’ or ‘judge’ Watts before asking again if he had ever been with Bolte.

‘I’ve never been with a guy,’ said Watts.

When asked if he had ever been with a man, wanted to be with a man or fantasized about being with a man, Watts responded ‘no.’

He then stated: ‘Apparently he told them I met him through a rehab center.’

That is when CBI Agent Tammy Lee responded: ‘No, that was another guy.’

Bolte meanwhile is standing by his story as of earlier this month, when he lashed out at his detractors on Twitter.

‘I didn’t know he was gonna murder his family when I was with him,’ he wrote to one, before going silent last week.

Bolte sat down with agents on August 29 and detailed how Watts first reached out to him on the MessageMe app, saying that the father complimented him on his picture and his lips.

He told the agents that Watts had a photo of the mountains on his profile and said that he was straight, prompting Bolte to ask why he was messaging a gay man.

‘lol, I don’t really know if I’m straight or not,’ said Watts.

The two then met for the first time at Bolte’s residence, who said that Watts started ripping off his clothes.

Soon after that, Bolte said that he met Watts’ daughters Bella and Celeste.

Bolte said prior to that Watts had told him: ‘If you turn out not to be a psycho maybe you can meet them.’

The two would spent time together at a remote Wyoming cabin said Bolte, which his mother Colleen confirmed in her own interview with a Colorado Bureau of Investigation agent.

She also told the agent that Watts had given her son money while they were together, and even paid for Bolte to get lip injections.

Bolte’s story has been questioned by many after he first claimed that he and Watts were together in a Facebook post soon after the murders.

It was that post and his subsequent interview on a national news program that led to police reaching out to Bolte, who said he first met Watts in June of 2017.