‘It’s definitely my hardest time right now’: Christian Eriksen admits this is the toughest period of his Tottenham career as club sit NINTH in the league

Christian Eriksen has opened up on the ‘hardest time’ in his Tottenham career as the club endure a miserable start to the new season.

Having exceeded all expectations to reach the Champions League final back in June, Tottenham are now ninth in the Premier League as they suffer one of their worst slumps under boss Mauricio Pochettino.

Eriksen made no secret of his desire to leave the club in the summer, with Real Madrid credited with an interest, and he has had to try and win back some supporters who felt his heart was not in the club.

All results from the Premier League unless stated otherwise

‘The first year when I came was probably a bit up and down, but since Pochettino came in 2014 it has been a success story. Expectations for us are at a completely different level now. We have to win every time and it’s the same feeling we have as players as well.

‘We as players must try to keep all the negative things completely out. But the reason for our results is actually hard to answer. We can’t close the matches, even though we are ahead. But we have also been unlucky.’

Eriksen dismissed the notion that transfer speculation around himself and other players is the reason behind the sluggish start to the season.

The Dane struggled to exert any influence at the AMEX stadium at the weekend where Tottenham were easily brushed aside by Brighton in a 3-0 win.

Having been one of Tottenham’s most impressive performers in recent seasons, Eriksen’s influence has waned in recent months with talk over his decision not to sign a new contract dominating the narrative.

He has featured in 11 matches so far this season and has produced just one goal and one assist. 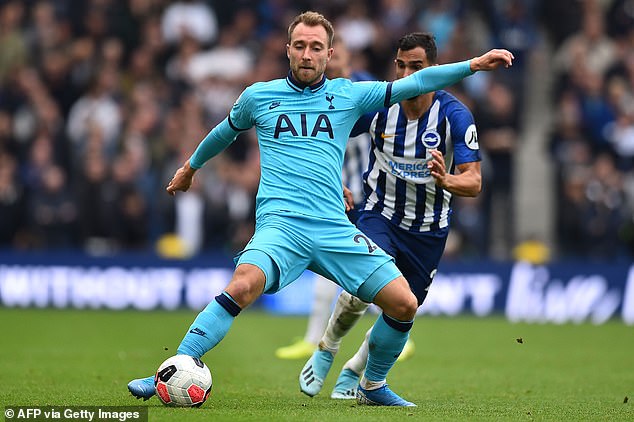