Nuns were pictured kissing a tiny thumb-size piece of wood believed to be part of Jesus’ manger which arrived Bethlehem 1,400 years after it was sent to Rome just in time for the first day of Christmas.

Cheerful crowds greeted the relic, which was a gift to the pope, before a service of celebration at Franciscan Church of St. Catherine next to the Church of the Nativity where Jesus is said to have been born.

Young Palestinian scouts played bagpipes and the crowd snapped pictures as a clergyman held the silver container containing the wood preserved inside, and marched towards the church.

A wooden relic thought to be part of Jesus’ manger has arrived in Bethlehem 1,400 years after it was sent to Rome. Sermons read bible passages in a service of celebration at Franciscan Church of St. Catherine next to the Church of the Nativity, and felt inspired by the unexpected arrival 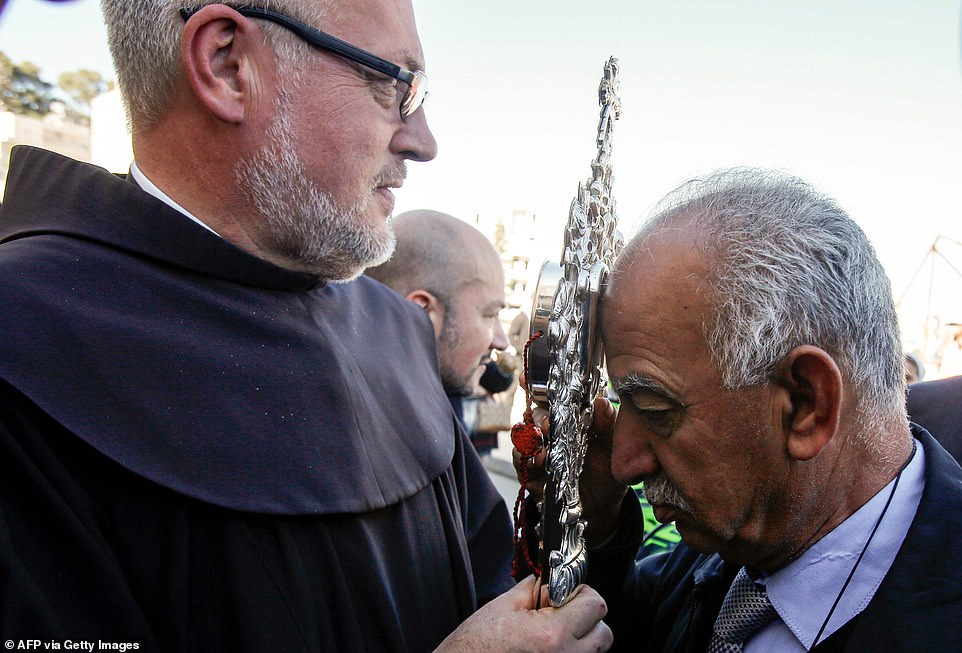 A man was photographed with his forehead against the relic to receive a blessing from the Relic of the Holy Crib of the child Jesus, earlier today 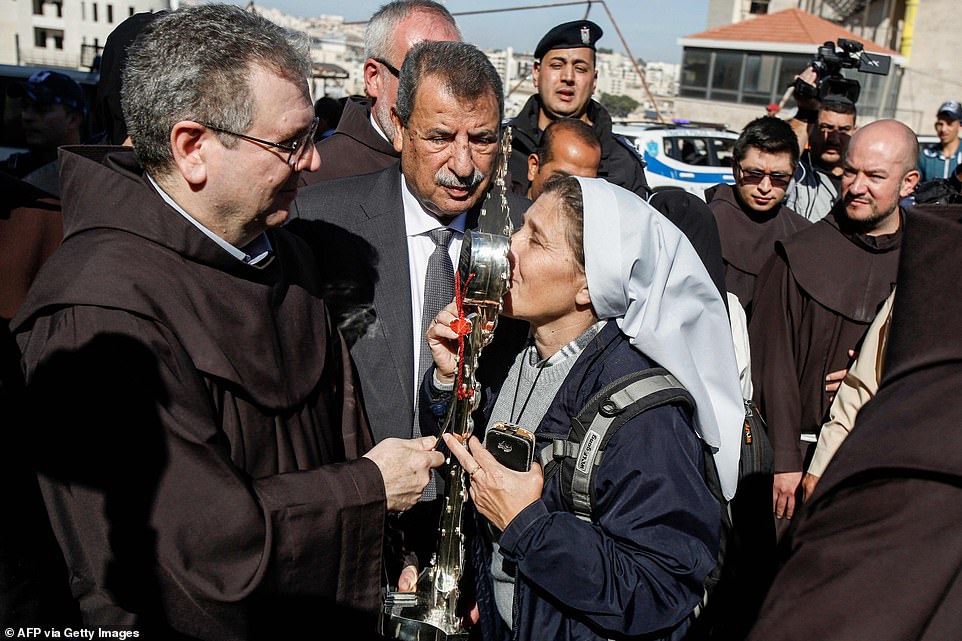 A custodian held the silver container while a nun shut her eyes and planted a kiss of the wooden relic for a good blessing, today 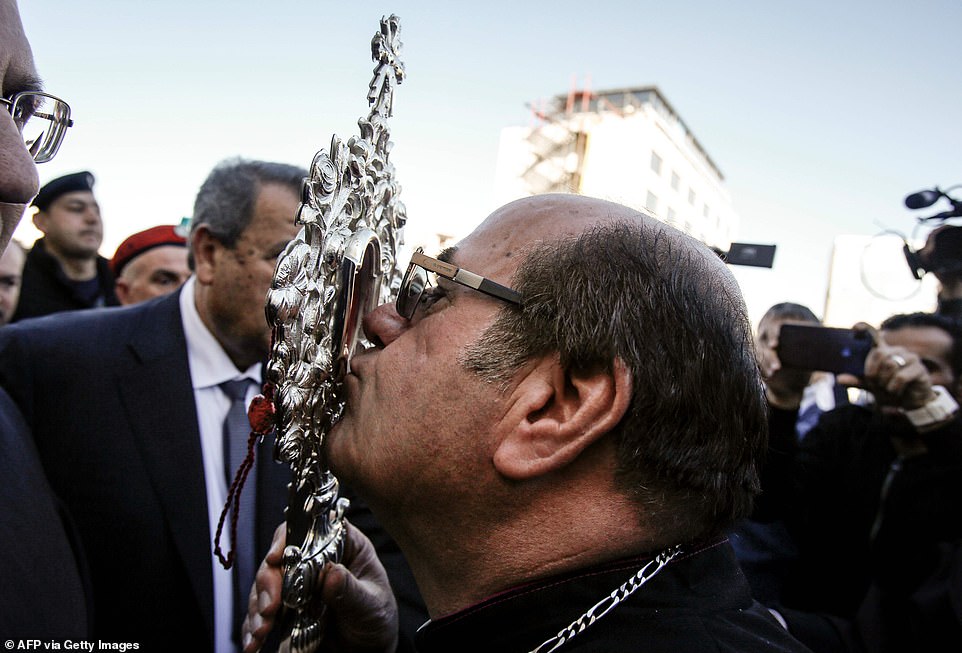 A man goes in for a kiss on the relic which has been in Rome since the seventh century, earlier today. It was taken to the Church of St Catherine, next to the Church of the Nativity where tradition says Jesus was born

Men rested their foreheads on the relic to receive a blessing in a highly emotive moment many Palestinians have only dreamed of.

Yisca Harani, an Israeli expert on Christianity, said relics are useful for dispelling arguments that Jesus was more spiritual than a physical being.

She claimed the object’s return is a ‘statement saying the Vatican and the Holy Land are together’.

Brother Francesco Patton, the custodian of the Franciscan order in the Holy Land, said that Palestinian President Mahmoud Abbas had asked Pope Francis to borrow the entire manger, but the pope decided to send a tiny portion of it to stay permanently in Bethlehem. 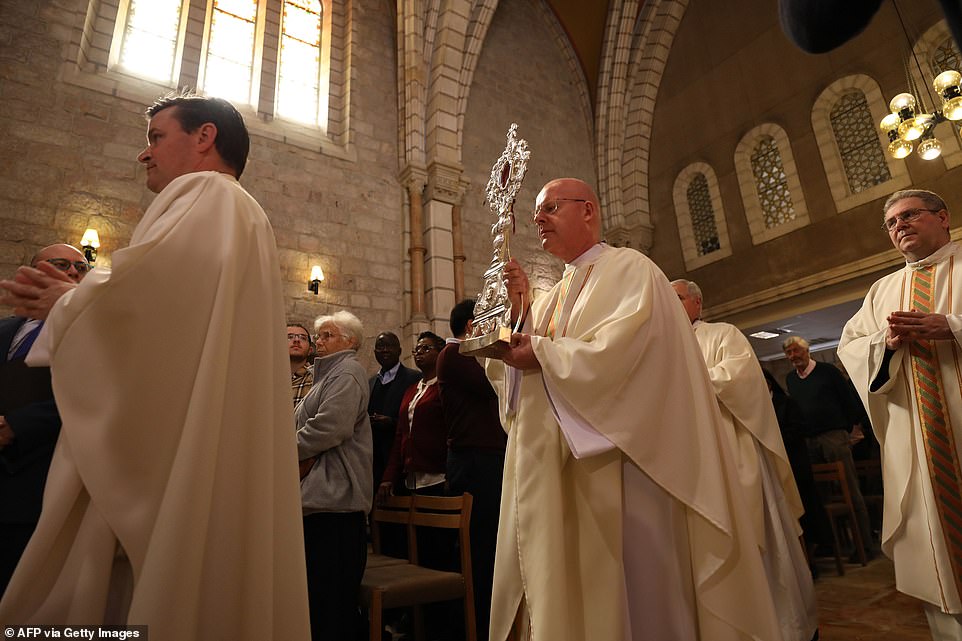 A Catholic priest carried the container through Our Lady of Peace chapel at Notre Dame in Jerusalem, while his colleagues kept a close eye to ensure it was secure during the service, yesterday 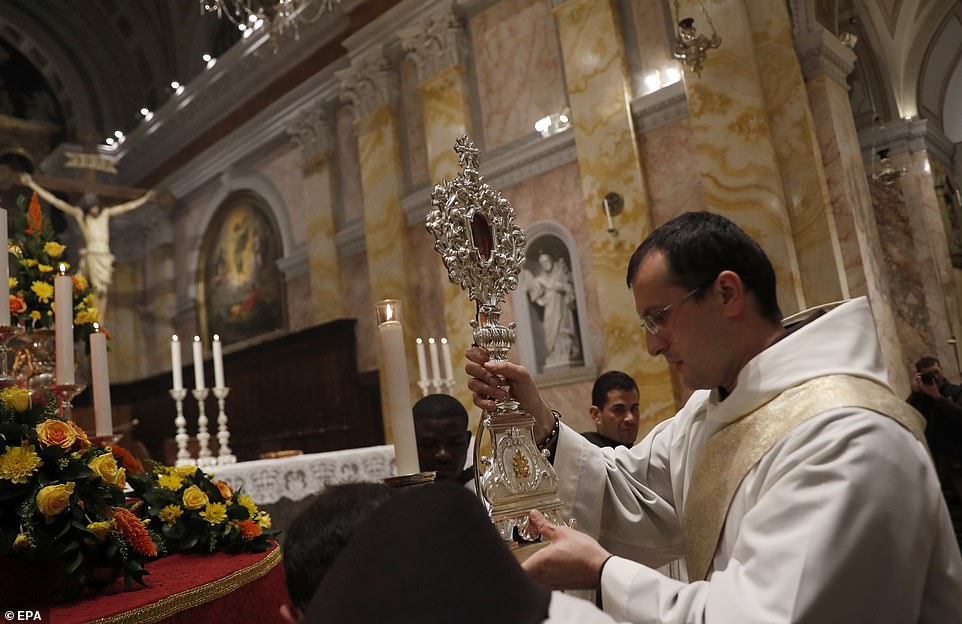 A Franciscan friar of the Custody of the Holy Land takes a moment to reflect on the object, said to have been part of Jesus’s manger, and the significance of it 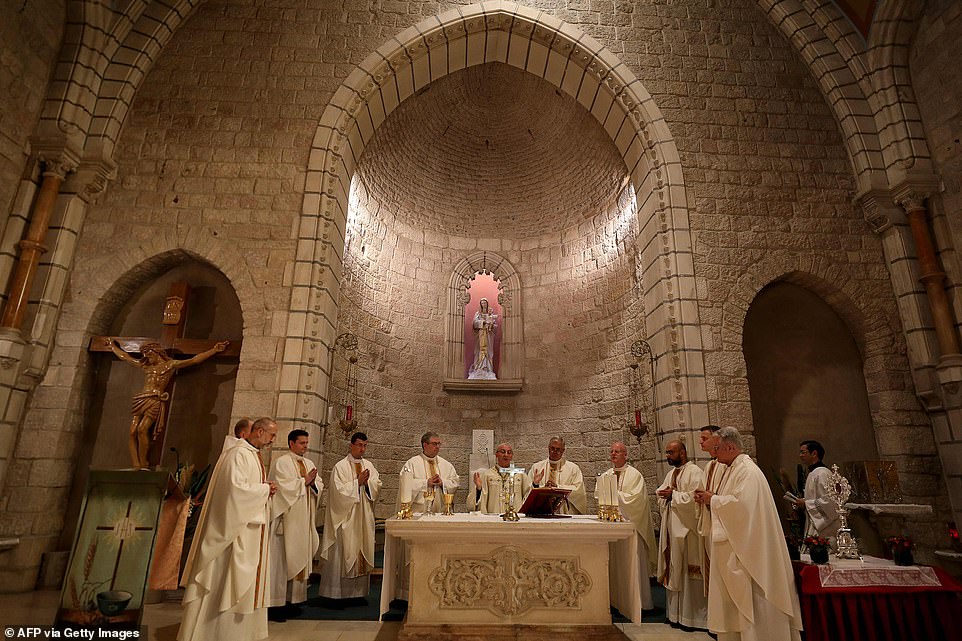 Apostolic Nuncio to the Holy Land Leopoldo Girelli (picture in centre) lead a mass at the Our Lady of Peace at the chapel at Notre Dame in Jerusalem, at the first celebrations of the relic’s arrival 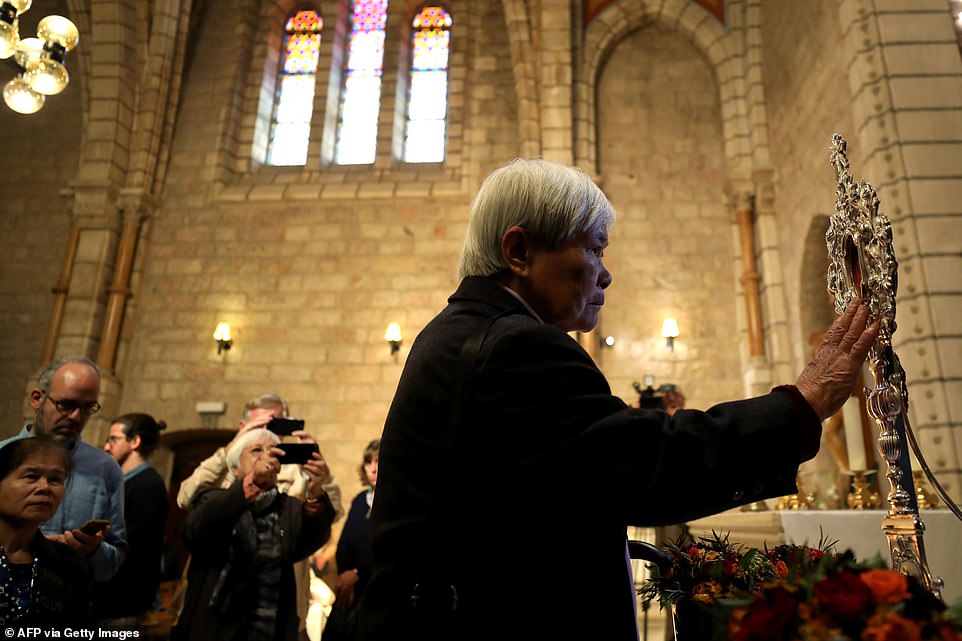 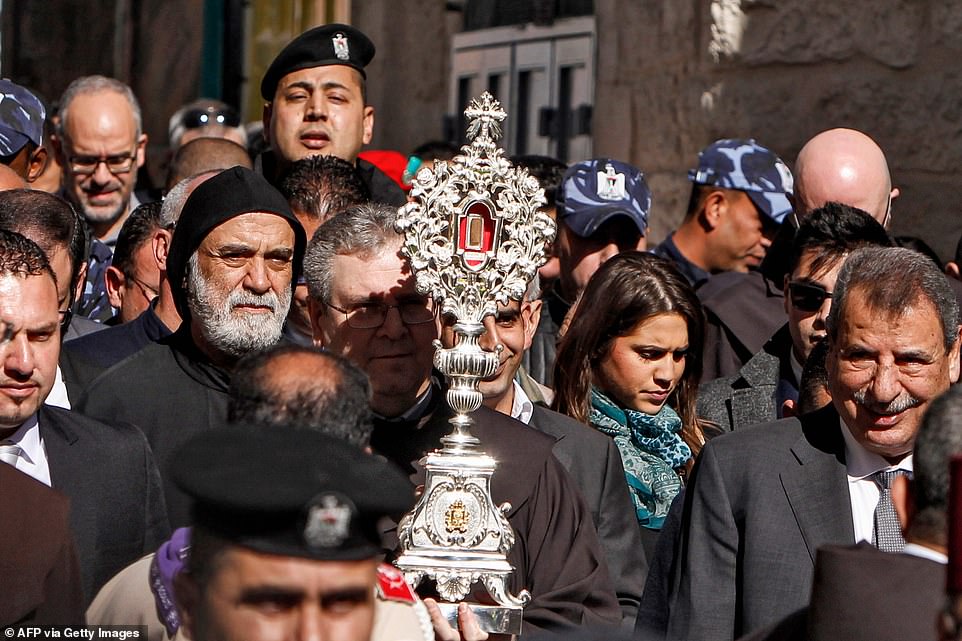 Brother Francesco Patton, the custodian of the Franciscan order in the Holy Land, carries the highly anticipated silver container through the crowded streets of Bethlehem where people have flocked to see the wooden piece inside 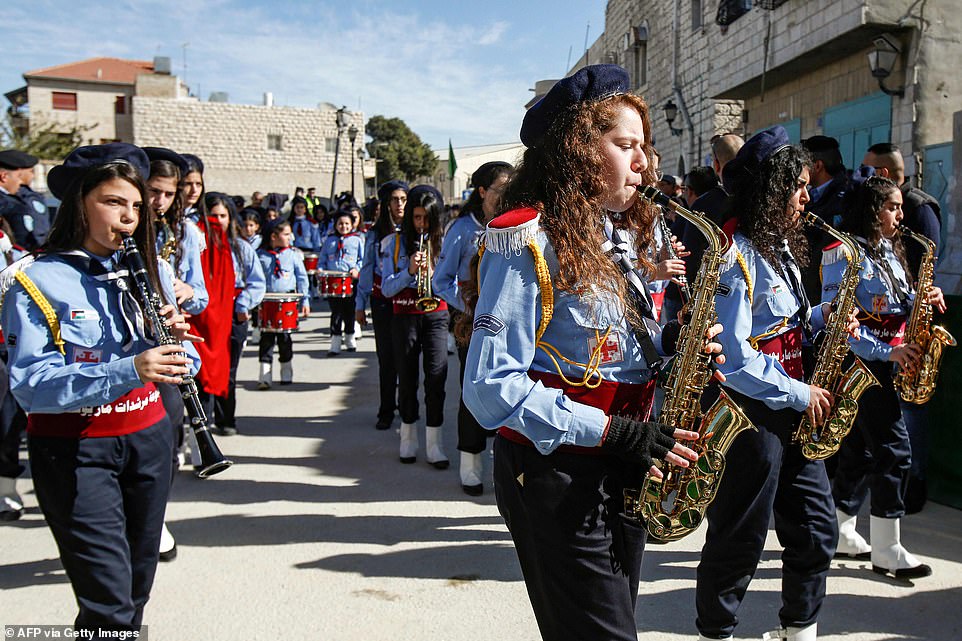 A Palestinian scout group took to the streets with their musical instruments ahead of the highly anticipated arrival of the relic, earlier today

He told Wafa that ‘it’s a great joy’ that the relic gets to return to its original place.

A wooden structure that Christians believe was part of the manger where Jesus was born was sent by St. Sophronius, the patriarch of Jerusalem, to Pope Theodore I in the 640s, around the time of the Muslim conquest of the Holy Land.

The thumb-sized wooden piece was unveiled to worshippers at the Notre Dame church in Jerusalem for a day of celebrations and prayer.

Around 50 worshippers attended a special Mass with the relic on display, yesterday.

Palestinian Prime Minister Mohammad Shtayyeh and other officials will attend the lighting of a Christmas tree in the Manger Square outside the Church of the Nativity. 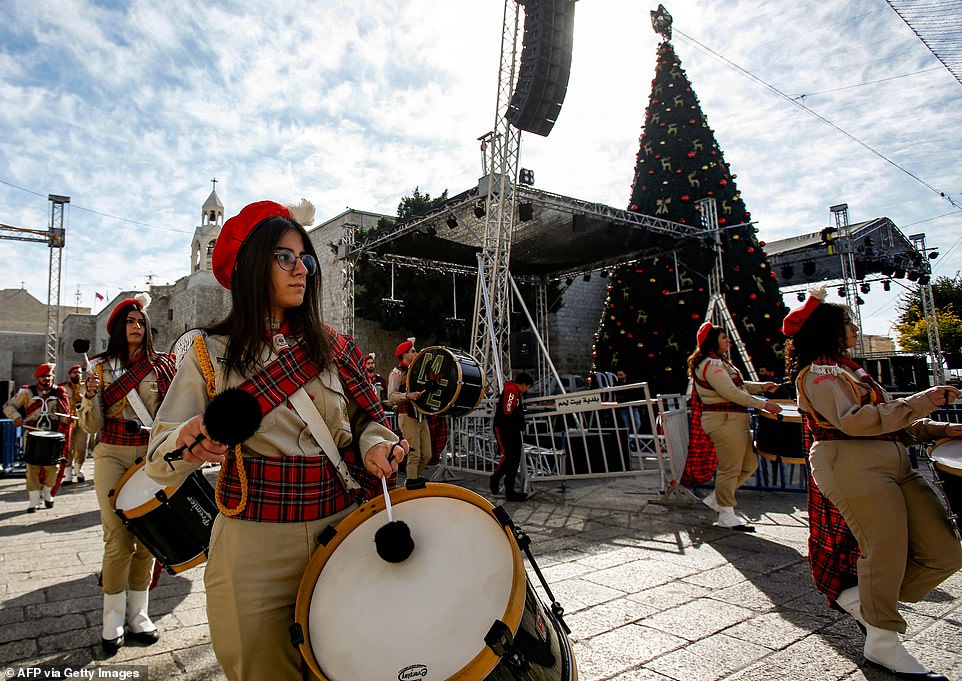 Others wore berets and tartan while playing the drums in a square in Bethlehem, earlier today, 1,400 years after it was sent to Rome 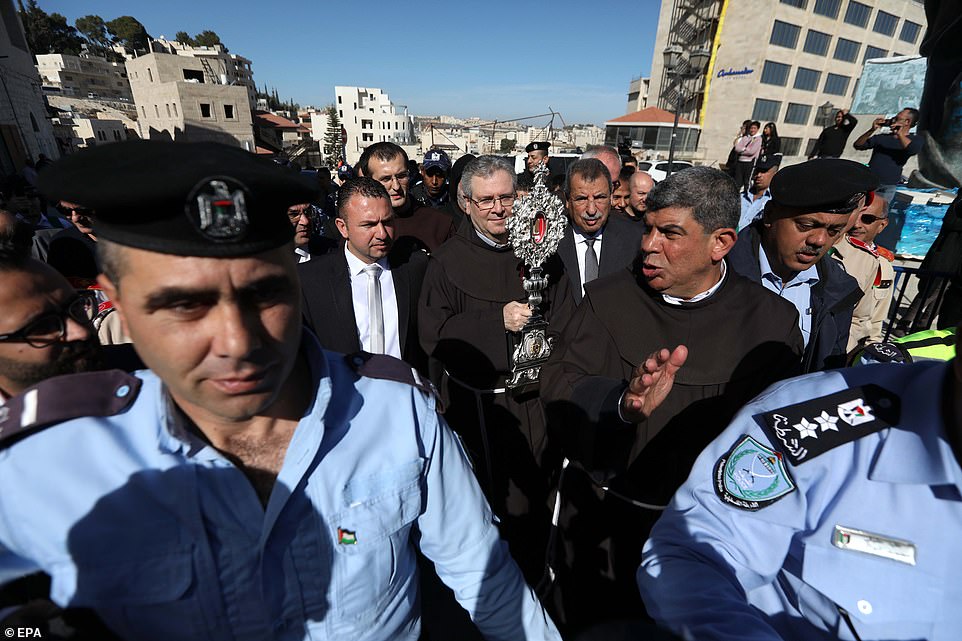 Crowds made space for Francesco Patton as he carries the silver reliquary through the bustling streets of Bethlehem, earlier today. He told Wafa news that ‘it’s a great joy’ that the relic gets to return to its original place 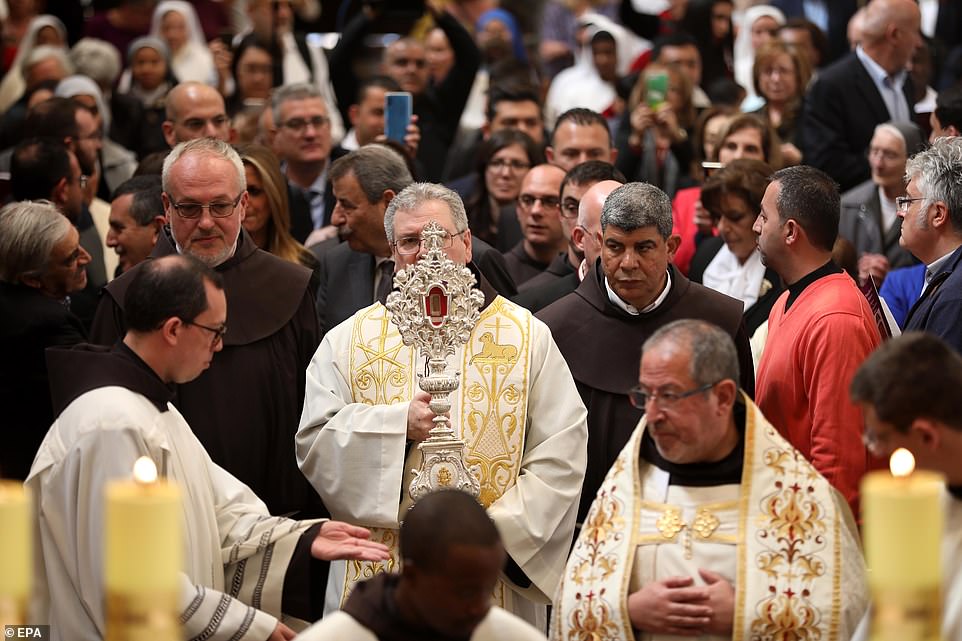 He is photographed holding the monument as others tried to capture the moment on their phones. The relic is said to have been donated by St. Sophronius, Patriarch of Jerusalem to Pope Theodore I 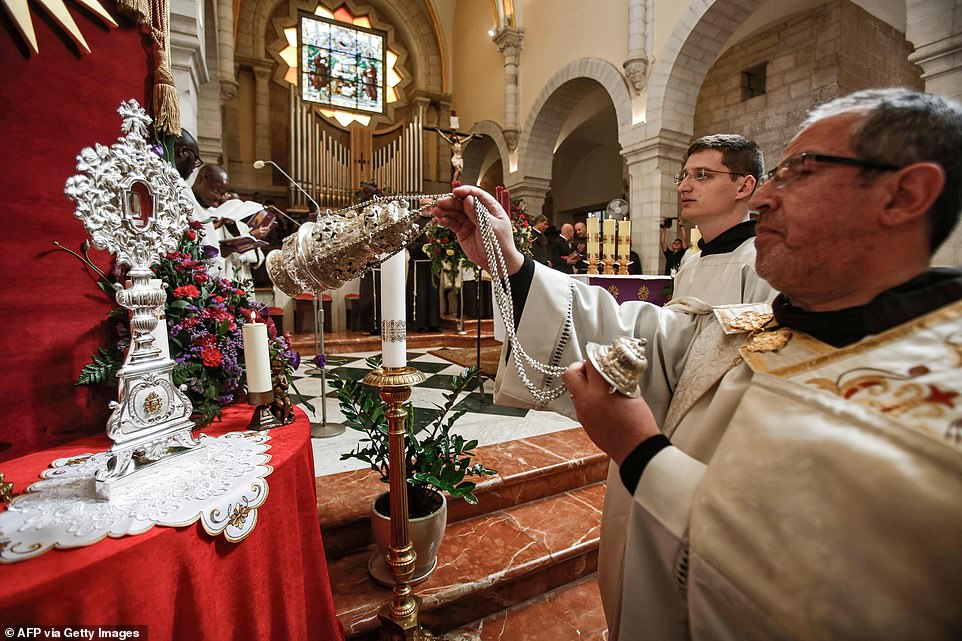 Meanwhile another Catholic clergyman swung a censer during a ceremony of reception of the relic, as part of a religious tradition. This sees incense burnt inside and then swayed towards an icon or person to represent the prayers of the church rising towards heaven