She gave birth to her first child Christian Georges Dumontet on May 15.

And new mum Christine Quinn, 31, looked incredible as she headed out to take her dogs for a walk in a Gucci tracksuit on Friday in Los Angeles.

The new mother has not shied away from the cameras since giving birth earlier this month, including appearing on E! News’ Daily Pop on Tuesday morning.

Bounce back: Christine Quinn , 31, showcased her incredible post-baby body in a Gucci tracksuit as she headed out on a dog walk on Friday, just two weeks after son Christian’s birth

Christine looked fresh faced for the makeup-free outing, carrying one pup under her arm while the other walked beside her on a neon green lead.

The Selling Sunset star showcased her post-baby body in a colourful flower print Gucci tracksuit, with the jacket zipper half way up and the trousers cropped a little above her ankle.

Always known for her fashion flair, Christine even wore designer footwear – opting for a pair of pink Gucci platform sliders.  She wore her signature blonde locks down and let them flow over one shoulder. 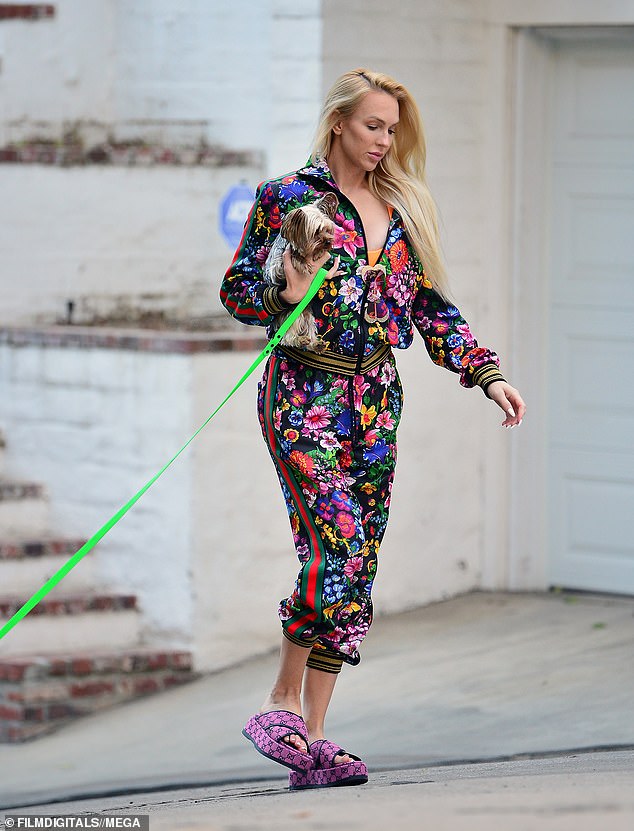 Chic: The new mother looked fresh faced for the makeup-free LA outing, carrying one pup under her arm while the other walked beside her on a neon green lead

Christine welcomed a ‘healthy baby boy’ via an emergency C-section on May 15 in Los Angeles with her husband, Christian Richard, by her side.

Speaking with E! News’ Daily Pop on Tuesday the new mother shared a professional picture of her newborn.

Quinn also took time to discuss the ‘mom-shamers’ that flooded her social media after learning that she had returned to work just days after her son’s arrival.

‘He’s iced out,’ said Quinn, who had her little one rocking a diamond encrusted Louis Vuitton chain for his first photoshoot. ‘He’s got a little bit of bling on. I just thought it was so cute, I had to do it.’

The newborn was posed sweetly on his back in a black onesie with one hand behind his head, while his eyes remained closed. 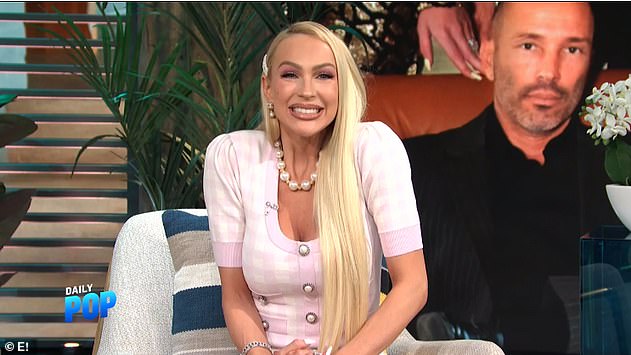 First look: Christine officially introduced her son Christian Georges Dumontet, whom she welcomed into the world on Saturday, May 15 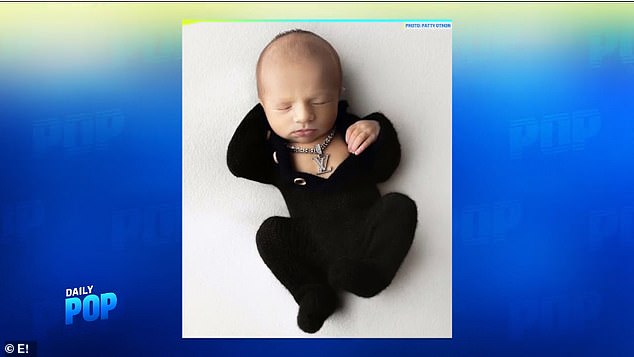 Baby boy! The 31-year-old Selling Sunset star shared a professional snapshot of the newborn during an appearance on E! News’ Daily Pop on Tuesday

The hosts of E! News’ Daily Pop, after ogling over Christian Jr., were curious to know how Christine has handled getting back to work so shortly after giving birth.

And according to the reality TV sensation, she has received backlash from ‘mom-shamers’ over the decision.

‘The mom-shamers are real, that’s for sure,” she revealed ‘I’ve gotten both ends of the spectrum.

Despite being inundated with critical social media messages, Christine has not taken any of it to heart.

‘I’m like, “Listen, my husband’s amazing. He’s home, the baby’s sleeping, what’s the difference?” For me, I love to work,’ she told the hosts.

‘There are single moms out there every single day working two, three jobs, doing it. Women are so strong and they can do it. 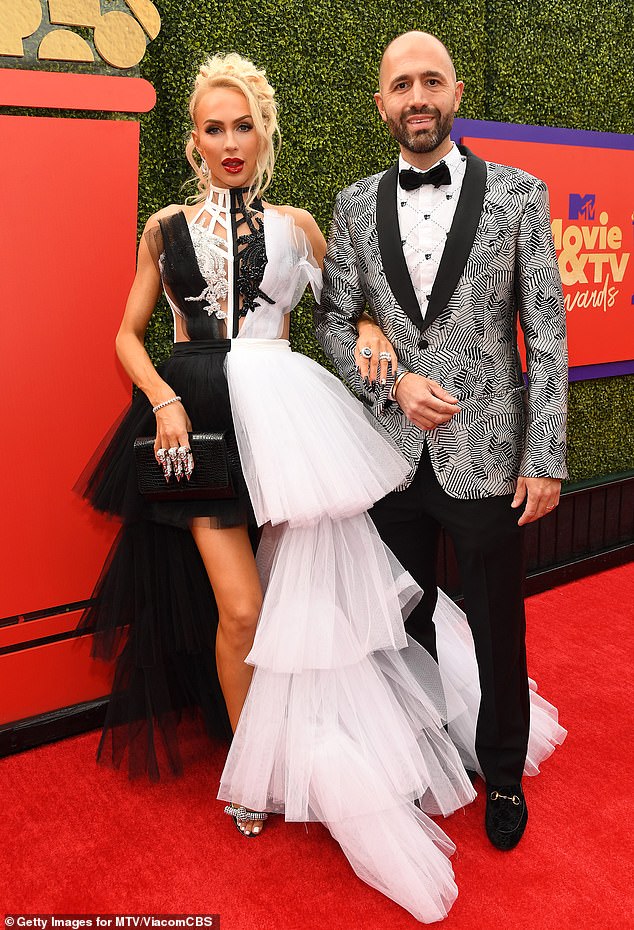 ‘I think that’s really the message here: Women really can do it all, so don’t be shaming!’ said Quinn, adding that she does currently plan to ‘keep her work life and home life separate.’

Although Christian Jr. has yet to meet any of Christine’s Selling Sunset castmates, she revealed an introduction is in the near future.

‘But hopefully this week so I’m really excited about that!’ said Christine, who had taken issues with her costars during her pregnancy for ‘not liking’ her pregnancy announcement on Instagram.

Further opening up about new motherhood, Quinn stated that her favorite part is ‘just being responsible for this human that you made.

‘It’s something about this instinctual bond…It’s just this love that I never, ever felt before. I have a whole new level of love. I didn’t know that was possible,’ she concluded. 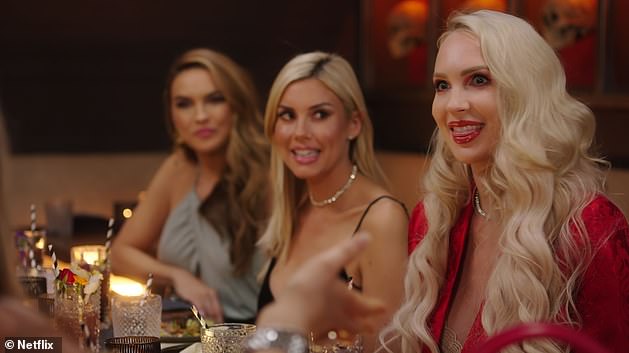 Soon, though! Although Christian Jr. has yet to meet any of Christine’s Selling Sunset castmates, she revealed an introduction is in the near future 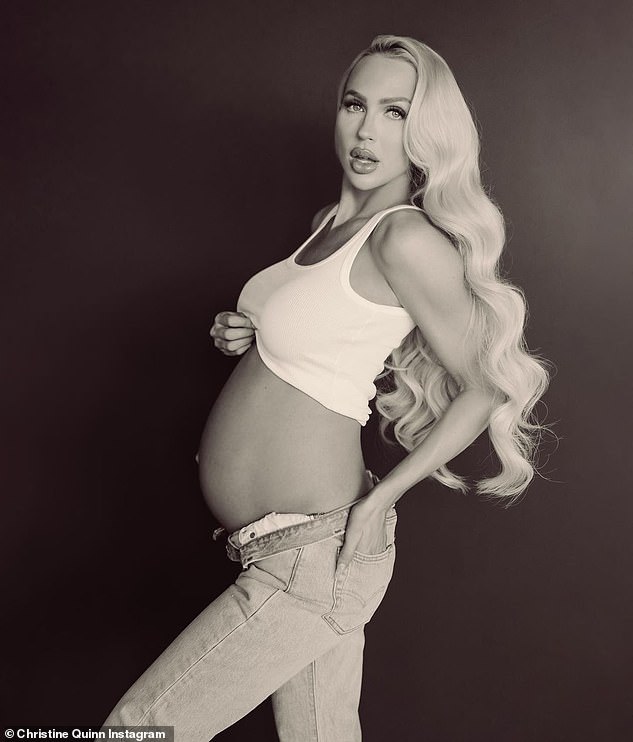 Sharing the journey: Since his arrival, Quinn has been using social media to gush over Christian Jr., with the star recently writing that she ‘could not feel more in love’

Since his arrival, Quinn has been using social media to gush over Christian Jr., with the star recently writing that she ‘could not feel more in love, blessed, and grateful.

‘Words can not express the joy of being a mommy.’

Christine uploaded her first post-birth selfie last Saturday, flashing a peace sign for her followers on her Instagram Story.

‘This mommy is tired but she’s still got work to do!’ she captioned the post, which showed her rocking a noticeable glow and makeup-free visage. ‘Love you all! Thank you for the wonderful warm messages.’

Prior to confirming his arrival on Instagram, the news of Christine giving birth was first reported by Us Weekly.

‘Christian Georges Dumontet was born a healthy baby boy on Saturday, May 15, at 4:22 p.m. in Los Angeles – less than two days after she appeared at the MTV Movie & TV Awards: Unscripted taping,’ a rep confirmed to the publication. 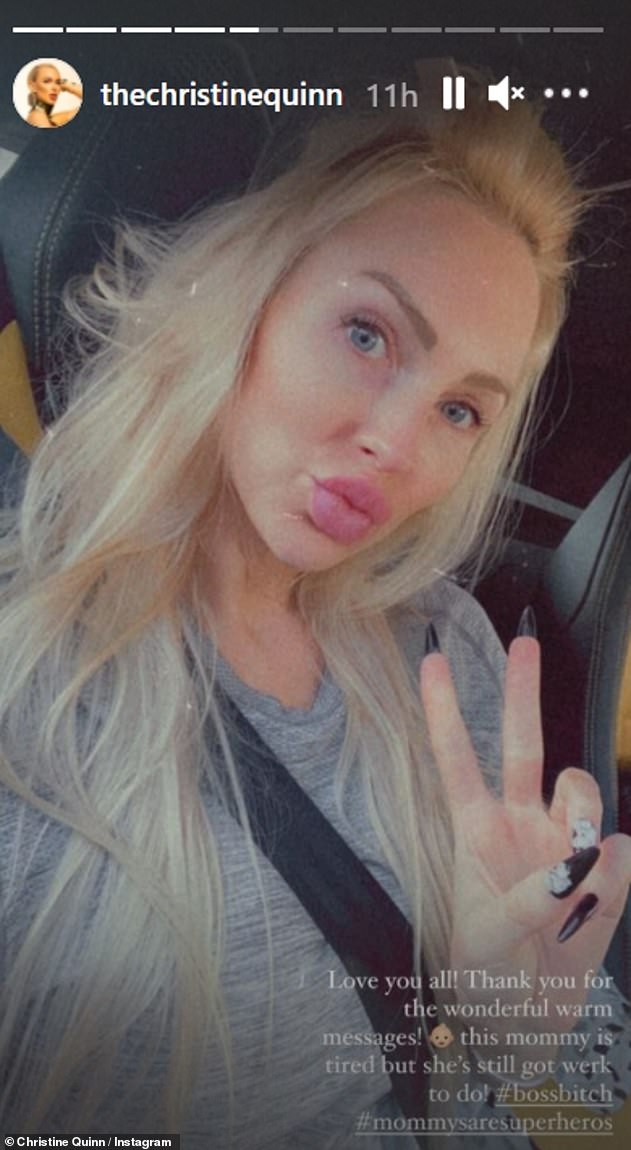 Glowing: Christine uploaded her first post-birth selfie last Saturday, flashing a peace sign for her followers on her Instagram Story 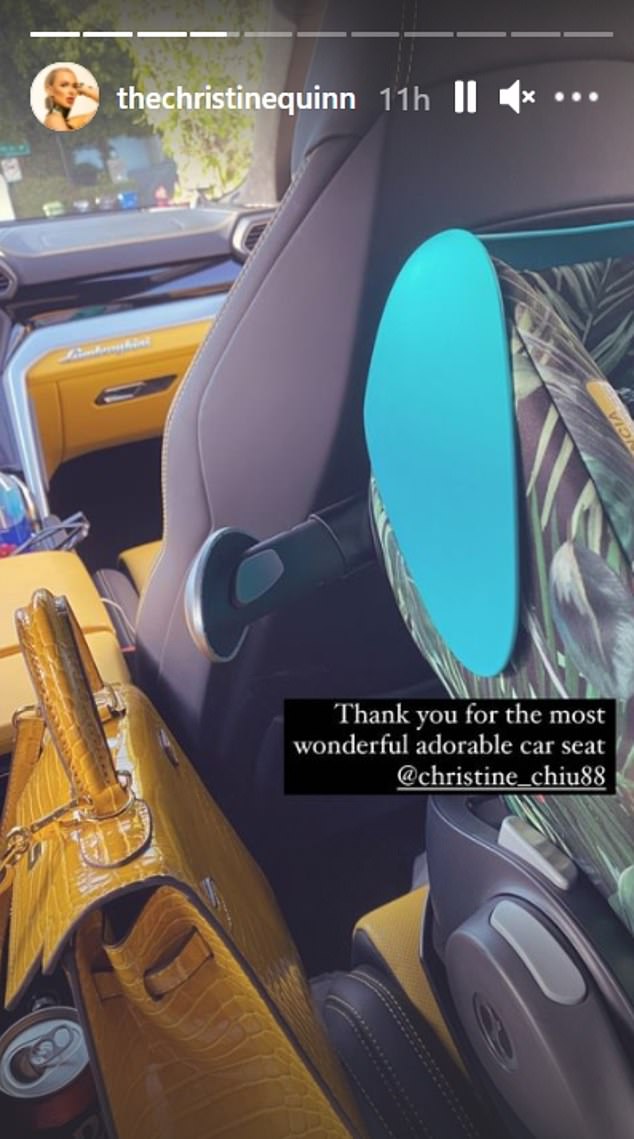 Baby on board! Christine also showed off her little boy’s tropical themed car seat, calling it ‘the most wonderful, adorable car seat’