Christmas cash gifts given to children is set to reach £1billion

The Christmas tradition of children unwrapping presents under the tree could soon be a thing of the past.

This Christmas, cash presents given to under 18s in the UK could reach almost £1 billion, it has been claimed – with even children as young as four expecting sizeable monetary gifts.

The questionnaire was carried out among 5,000 youngsters by Kids Insights, the largest continuous survey of UK children. It was the first time under 18s were asked about cash gifts.

Fewer children are expected to be unwrapping Christmas presents this year, according to a survey. Undated image

Boys believed they would receive slightly more than girls, with £83 expected, compared to £82 per person for girls.

And children and teenagers in the North East, North West and Yorkshire were anticipating more money – £89.69 per head – than those in London and the South East, who believed they would receive an average of £88.02.

If the findings were replicated across the country, under 18s would receive a total of £950 million in Christmas cash gifts, an average of £82 per youngster.

‘It may be that we are losing the traditional Christmas magic, when kids wake up to see whether their special gift is under the Christmas tree.

‘Today’s kids don’t just know what they want, but they know where to get it from. Teens, tweens and even under 12s are increasingly able to buy the tech toys and games they want, using their own debit cards online.’

Mr Richardson said retailers hit by sluggish sales in the run-up to Christmas could benefit as a result.

He said: ‘Companies who focus their marketing just on the pre-Christmas period are missing out on this near-£1bn cash bonanza.

‘Brands and retailers should consider the best ways to get this generation of kids to spend their cash with them.’

The survey asked children and teenagers: ‘How much money (cash) do you expect to get for Christmas?’ and is believed to be the first to capture the size of the growing Christmas cash gift market.

The research also found a growing number of under 18s who are becoming financially independent. 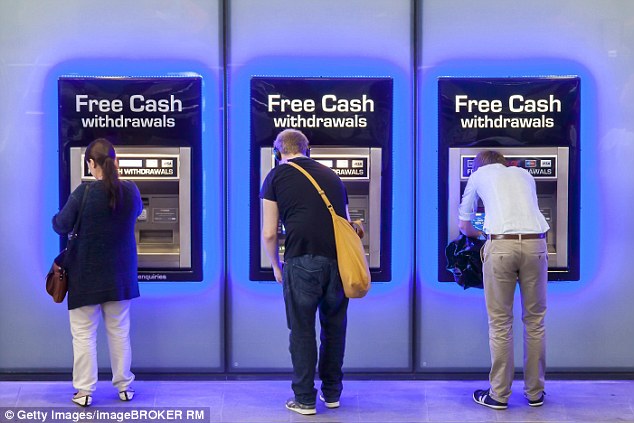 This Christmas, cash presents given to under 18s in the UK could reach almost £1 billion, it has been claimed – with even children as young as four expecting sizeable monetary gifts. File pic

Thirty two per cent of younger children aged four to 12 said they save their money in a bank account, up 6% since the start of the year.

Meanwhile, almost two thirds of children – 63pc – now handle their own savings or pocket money rather than have their parents do it for them, up 13 per cent on the start of the year.

Overall, 17 per cent of under-18s said they use some sort of pre-paid cash card, while debit cards have doubled in use, from 7pc to 14pc.

The number of 4-12s spending with pre-paid cash cards has risen from 4pc to 9pc, while children’s pre-payment system GoHenry, which offers a pre-payment card account featuring parental controls, is now used by 8pc of all children.

Cash gifts are partly growing in popularity due to gift cards being affected by the demise of some retail chains and also because they sometimes have an expiry date.

Some financial experts recommend giving cash to children in the form of an investment, such as through Premium Bonds or a savings account, because it teaches them about the value of money and can encourage them to save.

Andrew Hagger, of advice service MoneyComms, said: ‘I think one explanation for the amount of cash gifts being received by children these days could be that older relatives perhaps do not know what to buy for younger kids.

‘It’s not a bad thing as long as children don’t fritter the cash away. It would be great if their parents or grandparents said, how about putting a third or half into a savings account or perhaps Premium Bonds, and use the rest to buy something they really want in the sales.

‘Putting money into savings is a great habit for children to adopt as they grow which can help them in the future.’